Archaeologists from the University of Münster, Germany, have unearthed a large collection of 1,800-year-old clay seals, or bullae, at the ancient city of Doliche, which was part of the province of Syria in Roman times.

Clay seals from the archive of Doliche. Image credit: University of Münster.

“This unique group of over 1,000 artifacts from the municipal archive of Doliche (modern-day Dülük, Turkey) gives many insights into the local Greco-Roman pantheon — from Zeus to Hera to the soldier god Jupiter Dolichenus, who turned into one of the most important Roman deities from this site,” said classical scholar and excavation director Professor Engelbert Winter.

“The fact that administrative authorities sealed hundreds of documents with the images of gods shows how strongly religious beliefs shaped everyday life.”

“The cult of Jupiter Dolichenus did not only take place in the nearby central temple, but also left its mark on urban life,” he said.

“It also becomes apparent how strongly Jupiter Dolichenus, originally worshipped at this location, was connected with the entire Roman Empire in the 2nd and 3rd centuries CE: many of the images show the god shaking hands with various Roman emperors.”

Many bullae from Doliche are likely the administrative or official seals of the city ‘due to their size, frequent occurrence, and in some cases also due to inscriptions,’ according to the archaeologists.

“In addition to the images of the ‘city goddess’ Tyche, the depictions of Augustus and Dea Roma deserve special attention, since they point to the important role of the Roman emperor and the personified goddess of the Roman state for the town of Doliche, which lies on the eastern border of the Roman Empire,” Professor Winter said.

“However, the central motif is the most important god of the city, Jupiter Dolichenus. In the 2nd and 3rd centuries CE, his cult spread into large parts of the Mediterranean world, extending as far as Britain.”

“Therefore, it is not surprising that hundreds of documents were sealed with images showing a handshake between this deity and an emperor. It was a sign of the god’s affinity to the Roman state.”

The images also provide insights into the cult itself.

“In addition to bullae showing busts of Jupiter and his wife Juno, there are depictions of the divine twins Castor and Pollux, the sons of Zeus,” Professor Winter noted.

“The sons of Zeus, also known as Dioscuri or Castores Dolicheni, are often portrayed as companions of Jupiter and therefore play an important role in the cult.” 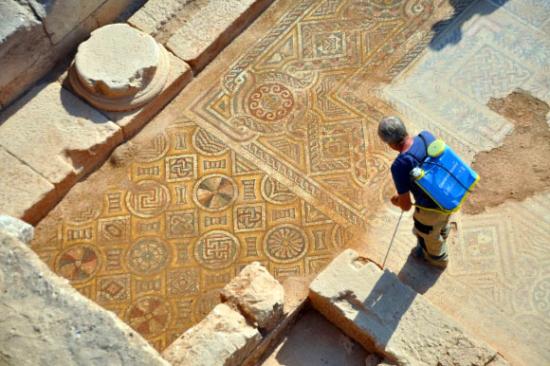 Under a 1,600-year-old mosaic within a complex of buildings at Doliche, the team found an even older mosaic floor of equally high quality.

“According to the present findings, there is much evidence of a late antique church,” Professor Winter said.

“This could turn out to be an important contribution to understanding the history of early Christianity in this region.”