'How Britain's Atlantis' and its tribes were wiped out by a TSUNAMI triggered by a landslide off the coast of Norway 8,200 years ago

Just over 8,000 years ago a huge landslide occurred off the coast of Norway, known as the Storegga Slide.

The event created a catastrophic tsunami, with waves almost half as high as the Statue of Liberty, that battered Britain and other land masses.

And now the most accurate computer model ever made of the tsunami suggests that it wiped out the remaining inhabitants of a set of low-lying landmass known as Doggerland off the coast of the UK.

Scroll down for animation of the tsunami 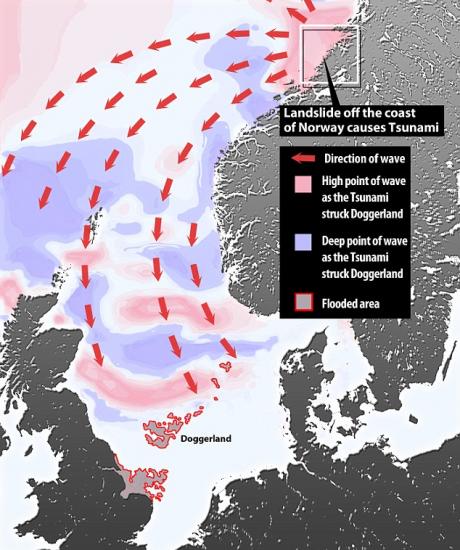 A new model by researchers at Imperial College London has revealed the devastating effects of a tsunami caused by a landslide off the Norwegian coast over 8,000 years ago. It's believed the event would have devastated an area of low-lying land known as Doggerland that once connected Britain to mainland Europe

The new study from researchers at Imperial College London is being presented at the European Geosciences Union General Assembly in Vienna this week.

Using advanced computer modelling and paleobathymetry - the study of underwater depths through history - they describe how deadly the tsunami would have been.

And they conclude it would have spelled disaster for the remaining inhabitants of Doggerland.

‘The research we’ve done is using advanced computer modelling to look at the Storegga slide,’ Dr Jon Hill, one of the authors on the study, tells MailOnline.

‘We’re the first to discover dissymmetry at the time, which no model has done before.

‘So we’re able to quantify what the tsunami looked like at Doggerland – no other study has predicted what the wave would have looked like.’

The huge wave that was created in the Storegga Slide occurred when a large chunk of coastal shelf 180 miles (290 km) long fell into the sea.

The slide was a single event 8,200 years ago, creating a wave that travelled across the Norwegian Sea in a few hours.

Fifteen hours later, the wave would have reached Belgium and Holland.

Dr Hill said it would have been equivalent to the 2011 Japanese tsunami in its scale. 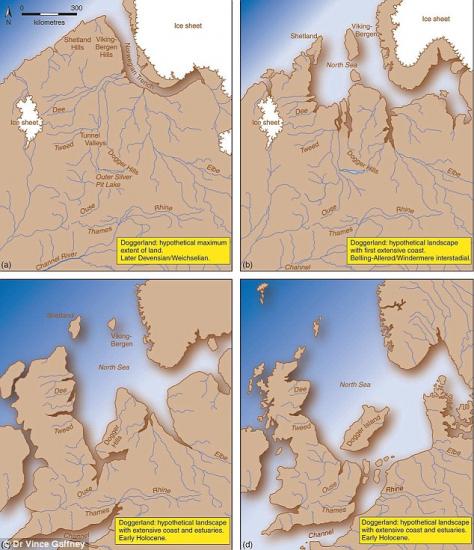 The landmass once connected Britain with Europe, and is believed to have been inhabited by Mesolithic tribes. Artificats recovered from the North Sea provide evidence as to the land's habitation. The tsunami is thought to have wiped out the last people to occupy the area, who were by then restricted to an island
Waves at Doggerland would have been five metres high, as opposed to 10 metres in the Japanese tsunami, as the land was so low-lying just a few metres above sea level.

‘It would have been completely inundated by a 5-metre wave,’ Dr Hill explains.

‘If you put a 5-metre wave towards Doggerland it would have been devastated.’

Archaeological evidence for this area is relatively sparse at the moment.

So far, we are relying mostly on finds made by fisherman.

But the evidence heavily suggests it was inhabited and, according to Dr Vince Gaffney of the

University of Birmingham who authored the book Europe’s Lost World: The Rediscovery of Doggerland, they would have ‘suffered dramatically.’

‘If we look at what the study tells us they’re talking about waves that are, in Scotland, as much as 40 metres high,’ he says.

‘The inhabitants of any low-lying areas like Doggerland would have suffered dramatically if hit by something of that size.’ 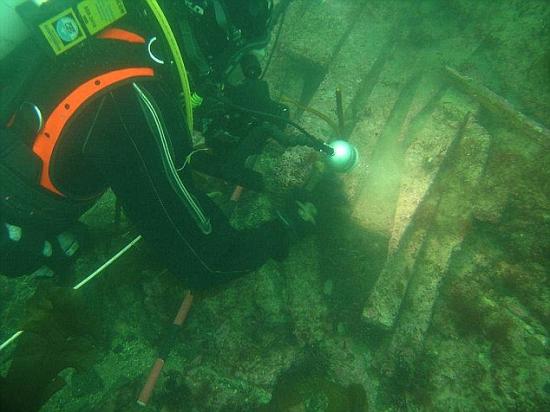 Divers from St Andrews University, searching for Doggerland, the underwater country dubbed 'Britain's Atlantis', in 2012. The underwater area is hard to explore as it is a busy sea lane with murky waters

St Andrews University's artists' impression of life in Doggerland. Further research will be need in order to discern just how many people were living on Doggerland, but it's unlikely many or any survived the deadly tsunami caused by the Storegga Slide
Dr Gaffney continues, however, that is hard to know exactly the extent of habitation on Doggerland because it is very inaccessible.

Described as ‘Britain’s Atlantis’ it is now located under busy sea lanes in murky water.

Thus, according to Dr Gaffney, ‘we know little about the people who inhabited these areas.’

Dr Hill says that modelling tsunamis of this type are important for understanding our history.

But they can also provide us with data on what we can expect from similar events in future.

Although he stresses no such event is likely to occur any time soon, the UK is susceptible to such dangers.

‘Part of the research is to find out what would happen as the oceans warm,’ he says.

The chances of another event on the scale of the Storegga Slide happening soon is, he says, ‘not likely to happen at all.’

Dr Gaffney adds, though, that these events are known to have occurred throughout history.

‘We sometimes think we’re a safe place to live in the UK,’ he says.

‘But sometimes there are risks even in Britain and that’s worth noting.’

Doggerland is a former landmass that once connected Britain to mainland Europe.

It is believed to have disappeared after being flooded by rising sea levels in about 6,500 BC.

Since 1931, a number of discoveries have been made in the North Sea that suggest clues as to what the landmass would have been like.

The remains of mammoths, lions and other animals, in addition to prehistoric tools and weapons, provides evidence for settlement by humans and animals.