Archaeologists have long known of Greek colonization of Magna Graecia, the name given to the coastal areas of Southern Italy and Sicily, thanks to artifacts and historical records. Somewhere around the 8th century BC, Greeks came in droves to settle Magna Graecia, bringing with them traces of a civilization that heavily influenced ancient Rome. While the cultural contribution of these Greeks to southern Italy is clear, researchers have argued for years about their biological contribution. New DNA research, though, purports to have solved the mystery: an influx of a few thousand men and a few hundred women in the Archaic period may have been enough to effect Hellenic colonization of Magna Graecia.

Writing in the European Journal of Human Genetics this week, an international team of scientists laid out their case for the origins of people in Magna Graecia.  The hypotheses about colonization in this area are drawn from archaeological, historical, and demographic data, but they hardly agree. Lead author Sergio Tofanelli and colleagues explain that there are “scenarios ranging from a colonization process based on small groups of males moderately admixing with autochthonous [indigenous] groups… to substantial migrations from Greece and a Hellenic origin for a significant part of the pre-Roman Italian population.” 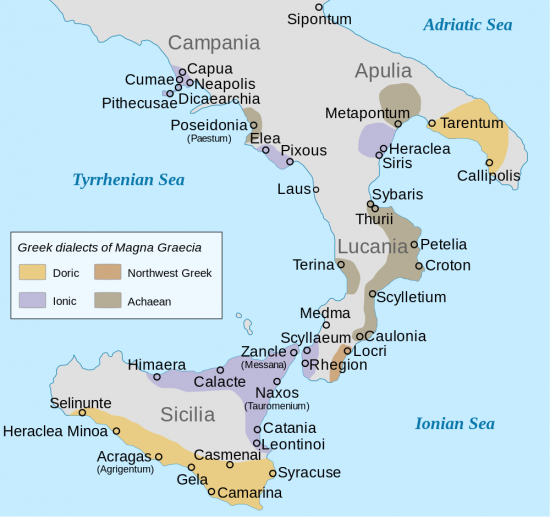 Ancient Greek colonies in Magna Graecia and their dialect groupings. (Image in the public domain, via wikimedia commons.)

Previous DNA analyses have been interpreted to bolster various hypotheses as well. Tofanelli and colleagues find fault with these studies of Greek colonization primarily because those studies used specific lineages or haplotypes as markers of colonization, and these contemporary genomes may not accurately reflect the genes that were present in ancient populations.  To counter this, Tofanelli and colleagues used both Y chromosome and mitochondrial DNA analysis and created demographic models to simulate genetic change over time. In particular, they looked for robust gene signatures for Greek contributions to Italy and Sicily, they tested alternative models, and they looked at the relative contributions of males versus females to find out more about the colonizing population.

Over 800 people native to the areas of Euboea and Corinth, where archaeologists and historians think the first wave of colonizers came from, along with people whose families were native to Sicily and southern Italy, had their DNA sequenced. When the researchers analyzed the Y chromosome data and modeled the typical mutation rate over the centuries, they “recovered a signature of the Greek Contribution to Sicily during the Archaic Period” or between the 8th and 5th centuries BC. More specifically, this wave of colonists likely arrived in East Sicily first and then dispersed into West Sicily and South Italy. “Despite the multiple alternative explanations for historical gene flow,” they write, “it is relevant to stress here that a signature specifically related to the Euboea island in East Sicily was consistently found at different levels of analysis, in line with the historical and archaeological evidence, attesting to an extended and numerically important Greek presence in this region.”

Historians and demographers have also debated just how large the migration population was when they arrived in Magna Graecia. Walter Scheidel, professor of classics and ancient history at Stanford University, has estimated from a demographic perspective that the founding population was likely around 20,000 to 60,000 males. But if Tofanelli and colleagues’ supposition that East Sicily was colonized first is correct, this “points to the lower end of the size spectrum proposed by historical demographers, with values in the order of thousands [of] breeding men and [a] few hundred breeding women,” they write.

“A settler population of 5,000 males, mating with local women, would have had to grow by more than 1% per year for several centuries,” Scheidel says in response to Tofanelli and colleagues’ conclusions. This is substantial and out of character for the ancient world, particularly considering the ancient Greeks were not polygamous. “Maybe growth rates were higher than we think,” Scheidel suggests, “but their settler numbers seem very small. This would translate to just a few dozen ships full of Greeks, over a considerable period of time, which is problematic. It’s hard for me to see how a few thousand settlers could have produced the large Greek population we see in Sicily a few centuries later.”

5th century BC Greek coins from Tarentum, an ancient Greek colony in the Magna Graecia area of Italy. (Image from the Classical Numismatic Group, used under a CC-BY-SA 3.0 unported license via wikimedia commons.)

The lopsided population that Tofanelli and colleagues reconstruct could also mean that “the migration and settlement process was driven by males,” which is interesting because “this is one of the few cases of sex-biased gene flow skewed towards an increased male instead of female contribution,” the authors conclude. However, the different male and female contributions to the DNA of East Sicilians could instead be related to patrilocality, or the cultural phenomenon where men stay near their birthplace while women leave the group to find spouses elsewhere.

This study is the first to use a full set of haplotypes and therefore provides better coverage of possible DNA links than previous studies. The authors caution, though, against accepting this study at face value, because more DNA studies would be needed to develop stronger conclusions about ancestry. As a study of modern DNA, this paper provides a strong research design, but testing ancient DNA would be even more helpful. Whether or not skeletal collections exist and whether or not those Archaic-period bones would produce collagen of high enough quality to be DNA sequenced, however, are questions that still need to be answered.  Tofanelli and colleagues have credibly shown that modern DNA evidence backs up historical and archaeological information about the Greek colonization of Magna Graecia. Ancient DNA work may settle the question once and for all.