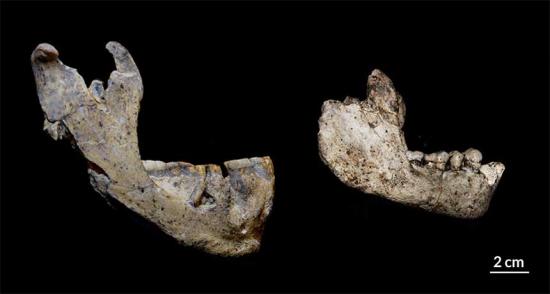 ONE OR TWO  These ancient lower jaws excavated in West Asia come from two different Homo species, a contested study concludes. The assessment conflicts with the proposal by the fossils’ discoverers that they represent a single species.

A controversial fossil and soil analysis concludes that a key West Asian site hosted not one but two Homo species, one living around 1.8 million years ago and another several hundred thousand years later.

A team that excavated partial skeletons at Dmanisi, in the nation of Georgia, categorized the finds as part of one species, Homo erectus, that lived in Africa and West Asia 1.8 million years ago (SN: 11/16/13, p. 6). But disparities in several skeletal features that emerge early in life distinguish a large Dmanisi lower jaw from two smaller ones, signaling the presence of separate species, asserts a team led by paleoanthropologist José María Bermúdez de Castro of the National Research Center on Human Evolution in Burgos, Spain. The small jaws come from a population that was closely related to early African Homopopulations, the scientists conclude February 20 in PLOS ONE. The team suggests the larger jaw belonged to Homo georgicus, a poorly understood species.

Excavation director David Lordkipanidze of the Georgian National Museum in Tbilisi disagrees. Shape similarities among Dmanisi skulls that fit the lower jaws indicate that only one Homo species occupied the site. Geologic studies show that the Dmanisi fossils are no younger than 1.76 million years old, he adds.

The description of a new skull (D4500) from the Dmanisi site (Republic of Georgia) has reopened the debate about the morphological variability within the genus Homo. The new skull fits with a mandible (D2600) often referred as ‘big’ or ‘enigmatic’ because of its differences with the other Dmanisi mandibles (D211 and D2735). In this report we present a comparative study of the variability of the Dmanisi mandibles under a different perspective, as we focus in morphological aspects related to growth and development. We have followed the notion of modularity and phenotypic integration in order to understand the architectural differences observed within the sample. Our study reveals remarkable shape differences between D2600 and the other two mandibles, that are established early in the ontogeny (during childhood or even before) and that do not depend on size or sexual dimorphism. In addition, D2600 exhibits a mosaic of primitive and derived features regarding the Homo clade, which is absent in D211 and D2735. This mosaic expression is related to the location of the features and can be explained under the concept of modularity. Our study would support the possibility of two different paleodemes represented at the Dmanisi site. This hypothesis has been previously rejected on the basis that all the individuals were constrained in the same stratigraphic and taphonomic settings. However, our revision of the complex Dmanisi stratigraphy suggests that the accumulation could cover an undetermined period of time. Even if “short” in geological terms, the hominin accumulation was not necessarily synchronic. In the same line we discard that the differences between D2600 and the small mandibles are consequence of wear-related dentoalveolar remodeling. In addition, dental wear pattern of D2600 could suggest an adaptation to a different ecological niche than the other Dmanisi individuals. 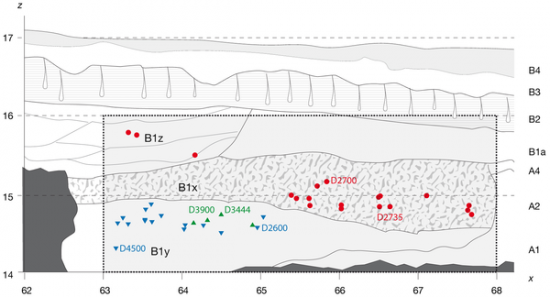