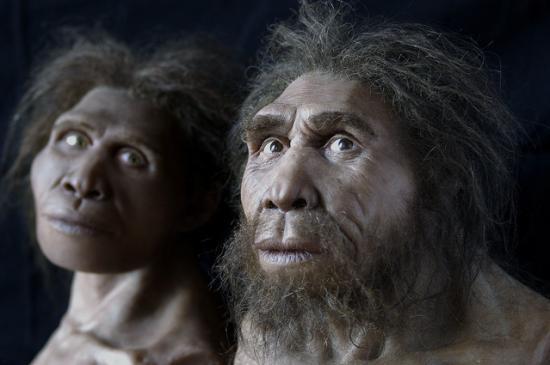 The reconstructed faces of Mzia, left, and Zezva, two hominids who lived in the area that is now the Black Sea country of Georgia. Their bones were found alongside 1.8 million year old stone tools, suggesting they are the oldest Europeans, said experts. Source: Georgia National Museum via Bloomberg 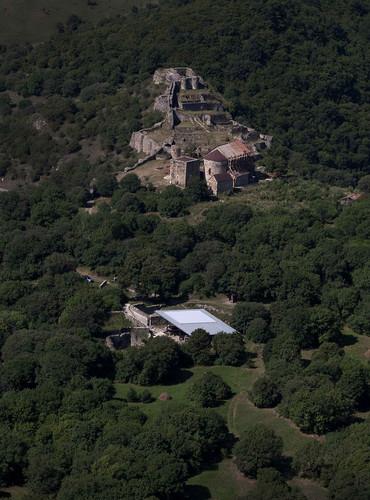 An aerial view of the village of Dmanisi, Georgia, near the Armenian border. Fossils of human-like creatures, tools and remains of saber-toothed tigers have been found at the site, causing experts to say the history of human evolution needs to be rewritten. Source: Georgia National Museum via Bloomberg

The history of human evolution needs to be rewritten.

This is the view of David Lordkipanidze, who claims his discovery of the bones of a couple known as Zezva and Mzia puts the Black Sea country of Georgia at the center of the archaeological world.

The small-brained apelike creatures lived in the area at least 1.75 million years ago, making them the first proven residents of Europe and Asia, says Lordkipanidze. The find has thrown into question the theory that the first hominids to disperse from Africa were homo erectus, a species with large brains and bodies approaching human size.

“Now the news is that we have found stone tools,” says Lordkipanidze, the Georgian National Museum’s director. “Stone and bone samples are older than any other findings, proving we’ve had human presence in Georgia from at least 1.85 million years or more.”

The 49-year-old professor remains calm about the discovery, sitting in his office wearing a blue shirt and denims. The news is supported by 10 experts who have written a report to the National Academy of Science, he says. Lordkipanidze is also dismissive of skeptics who say the announcement is only intended to help Georgia to become a bigger tourist destination and global hub for archaeology.

The nation of 4.6 million people on the Silk Road has been trying to restore its economy after it fought a five-day war in 2008 over the breakaway Georgian region of South Ossetia. The Georgian government forecasts as many as 3 million tourist visits this year, rising to 5 million by 2015.

Lordkipanidze’s room is bright and modest. Shelves are full of memorabilia of the findings from near the village of Dmanisi, southwest of the capital Tbilisi and near the Armenian border.

An international team found the first human jaw there in 1991. Between then and 2007, fossils from as many as six individuals have been found at the same site. Three are being reconstructed by artists -- Zezva and Mzia (typical old- fashioned Georgian names) and their possible offspring of a teenage female. The skulls can be covered with flesh and hair to give them simian smiles and protruding jaws. The excavations are funded by Georgia’s government and companies including BP Plc and Rolex Group.

National Geographic magazine, and Science, have both put Zezva and Mzia on their covers, noting that they hold the key to human evolution. Perhaps early humans took a detour into Eurasia before an epic journey out of Africa.

These people were about 1.4 meters (4 feet 9 inches) tall, with small brains and legs more developed than their arms, showing that they were good runners. They lived alongside predators like saber-toothed tigers, whose skulls were also found.

“Their main lifestyle was to compete with big and dangerous animals,” Lordkipanidze says. “They lived in groups and they were taking care of each other.” They were on a site totaling no more than 10 square meters and their death was mostly natural.

Lordkipanidze’s museum’s collection dates back to 1852. After the Rose revolution in 2003, it was re-established the following year by a presidential decree. It unifies the Soviet Occupation Museum, the archives of the Ministry of State Security and Internal Affairs of Georgia, and the golden treasury, including objects from the ancient kingdom of Colchis from Vani, known as the destination of Jason and the Argonauts in their quest for the Golden Fleece.

Excavations continue at Dmanisi, while only 10 percent of the historical site has been explored, Lordkipanidze says.