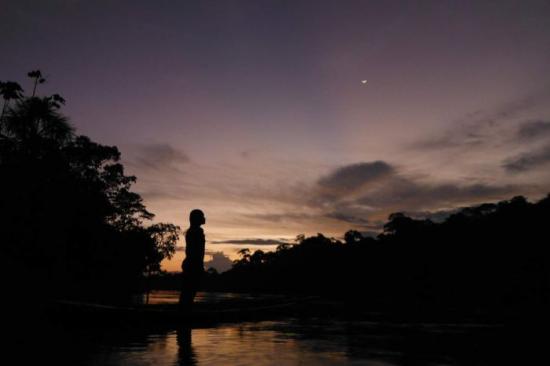 A Murui girl listens to the sounds of the jungle after taking a bath in the Cara-Paraná river. Supplied: Kasia Wojtylak

From the suburbs of Cairns to the wilds of the Amazon jungle, two James Cook University students are on a mission to make a documentary about one of the world's disappearing languages.

Husband-and-wife team Kristian Lupinski, an aspiring cinematographer, and Kasia Wojtylak, a PhD student of anthropological linguistics, will spend five months living with the Murui people on the banks of the Cara Parana River, near the border of Colombia and Peru.

To reach their destination, they will take a charter flight from the Colombian capital Bogota to Puerto Leguizamo, before spending up to three days on board a number of boats and canoes to complete the 800km journey.

"If you want to write the grammar of a language, you have to be surrounded by that language — that's why we've chosen to undertake such a great journey," Ms Wojtylak said.

Local people fear children will not learn their culture

The documentary-making voyage will be Ms Wojtylak's second visit to the village of Tercera India, where in 2013 she spent six months living with a family and compiling a database of the Murui language for her PhD thesis.

It was on that first trip that Ms Wojtylak became aware of how much the Murui people feared losing their language and culture.

"They told me their culture was to sit and listen to stories from elders; that they learned by doing and listening, not reading," she said.

"They are concerned their children will not learn their culture and language, and wanted it recorded as a story." 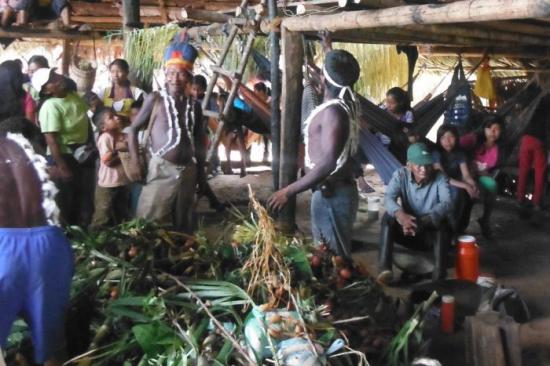 Documentary film will be directed by community

The couple's journey has been made possible through a grant awarded to them by the Firebird Foundation for Anthropological Research, an organisation which aims to preserve and record indigenous languages.

"In South America, a lot of languages are disappearing because of discrimination against minority groups like the Murui people," Ms Wojtylak said.

"In order to improve the status of those languages, to show that those languages are significant for everybody in the world, we want to show some documentation [and] we want to make the people proud of their language."

Mr Lupinski said the film they hoped to create would document the everyday lives and oral literature of the Murui people, to assist them in preserving their cultural knowledge and language for future generations.

"We're looking to create a documentary film that's not so much directed by us. Rather it's directed by the community because they asked for a film to be made," he said.

"We're also bringing a couple of video cameras to show them how to use them, because they'd like to be able to continue their documentation.

"We're not going to the extent of showing them how to become Hitchcock ... but the essentials of cinematography will definitely be passed on from us to them." 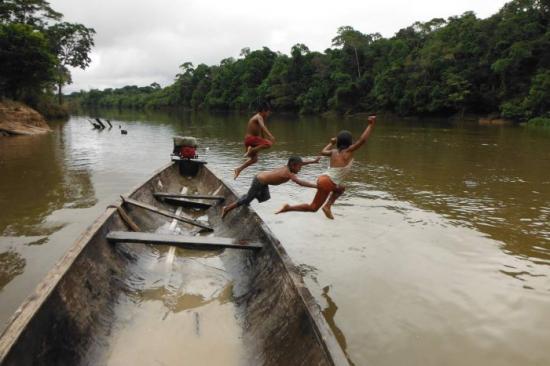 The Murui villagers from Tercera India bathe in the Cara-Paraná river. Ms Wojtylak says Murui elders believe the strength of one's body requires bathing in the river in the early hours of the day when the water is still very cold. Supplied: Kasia Wojtylak

Couple hopes to present film at festivals to raise awareness

As well as returning the documentary to the community, Ms Wojtylak and Mr Lupinski hope to enter their completed film into a number of film festivals to raise awareness of the world's disappearing languages.

"Whenever something is documented or recorded and then shown in that kind of light, it provides a certain kind of elite status to it," Mr Lupinski said.

Ms Wojtylak said by the end of her last trip to Tercera India, she had noticed a marked increase in the number of children speaking Murui instead of Spanish, and hoped this trip would inspire more children in the same way.

"Although their Murui would be broken, they were still trying to speak the language," she said.

"That was the greatest achievement — to show these kids that speaking their native language is something very important." 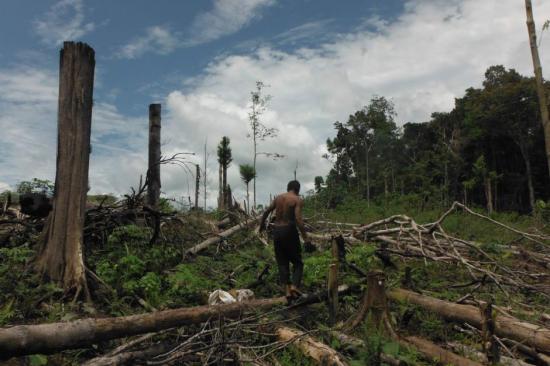 A Murui man walks through the jungle garden where villagers from Tercera India grow food as well as tobacco for rituals. Supplied: Kasia Wojtylak