Did Vikings navigate by polarized light?

Did Vikings navigate by polarized light?

'Sunstone' crystals may have helped seafarers to find the Sun on cloudy days. 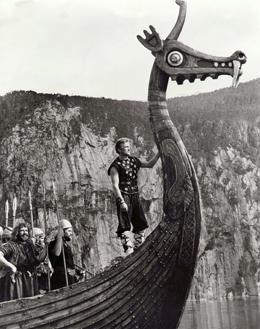 A Viking legend tells of a glowing 'sunstone' that, when held up to the sky, revealed the position of the Sun even on a cloudy day. It sounds like magic, but scientists measuring the properties of light in the sky say that polarizing crystals — which function in the same way as the mythical sunstone — could have helped ancient sailors to cross the northern Atlantic. A review of their evidence is published today in Philosophical Transactions of the Royal Society B1.

The Vikings, seafarers from Scandinavia who travelled widely and settled in swathes of Northern Europe, the British Isles and the northern Atlantic from around 750 to 1050 AD, were skilled navigators, able to cross thousands of kilometres of open sea between Norway, Iceland and Greenland. Perpetual daylight during the summer sailing season in the far north would have prevented them from using the stars as a guide to their positions, and the magnetic compass had yet to be introduced in Europe — in any case, it would have been of limited use so close to the North Pole.

But Viking legends, including an Icelandic saga centring on the hero Sigurd, hint that these sailors had another navigational aid at their disposal: a sólarsteinn, or sunstone.

The saga describes how, during cloudy, snowy weather, King Olaf consulted Sigurd on the location of the Sun. To check Sigurd's answer, Olaf "grabbed a sunstone, looked at the sky and saw from where the light came, from which he guessed the position of the invisible Sun"2. In 1967, Thorkild Ramskou, a Danish archaeologist, suggested that this stone could have been a polarizing crystal such as Icelandic spar, a transparent form of calcite, which is common in Scandinavia2.

Light consists of electromagnetic waves that oscillate perpendicular to the direction of the light's travel. When the oscillations all point in the same direction, the light is polarized. A polarizing crystal such as calcite allows only light polarized in certain directions to pass through it, and can appear bright or dark depending on how it is oriented with respect to the light.

Centred on the light

Scattering by air molecules in the atmosphere causes sunlight to become polarized, with the line of polarization tangential to circles centred on the Sun. So Ramskou argued that by holding a crystal such as calcite up to the sky and rotating it to check the direction of polarization of the light passing through it, the Vikings could have deduced the position of the Sun, even when it was hidden behind clouds or fog, or was just beneath the horizon.

Historians have debated the possibility ever since, with some arguing that the technique would have been pointless, because it would only work if the crystal was pointed at patches of clear sky, and in such conditions it would be possible to estimate the position of the Sun with the naked eye, for example from the bright lining of cloud tops3.

Gábor Horváth, an optics researcher at Eötvös University in Budapest, and Susanne Åkesson, a migration ecologist from Lund University, Sweden, have been testing these assumptions since 2005. The special issue of Philosophical Transactions of the Royal Society B in which their review appears is dedicated to biological research on polarized light1.

In one study, the researchers took photographs of partly cloudy or twilight skies in northern Finland through a 180° fisheye lens, and asked test subjects to estimate the position of the Sun4. Errors of up to 99° led the researchers to conclude that the Vikings could not have relied on naked-eye guesses of the Sun's position.

To check whether sunstones would work better, in 2005 they measured the polarization pattern of the entire sky under a range of weather conditions during a crossing of the Arctic Ocean on the Swedish icebreaker Oden5,6.

The researchers were surprised to find that in foggy or totally overcast conditions the pattern of light polarization was similar to that of clear skies. The polarization was not as strong, but Åkesson believes that it could still have provided Viking navigators with useful information.

"I tried such a crystal on a rainy overcast day in Sweden," she says. "The light pattern varied depending on the orientation of the stone."

She and Horváth are now planning further experiments to determine whether volunteers can accurately work out the Sun's position using crystals in various weather conditions.

Sean McGrail, who studied ancient seafaring at the University of Oxford, UK, before retiring, says that the studies are interesting but there is no real evidence to indicate that the Vikings actually used such crystals. "You can show how they could be used, but that isn't proof," he says. "People were navigating long before this without any instruments."

Surviving written records indicate that Viking and early medieval sailors crossed the north Atlantic using the Sun's position on clear days as a guide, in combination with the positions of coastlines, flight patterns of birds, migration paths of whales and distant clouds over islands, says Christian Keller, a specialist in North Atlantic archaeology at the University of Oslo. "You don't need to be a wizard," he says. "But you do need to combine a lot of different sorts of observations."

Keller says he is "totally open" to the idea that the Vikings also used sunstones, but is waiting for archaeological evidence. "If we find a shipwreck with a crystal on board, then I would be happy," he says.