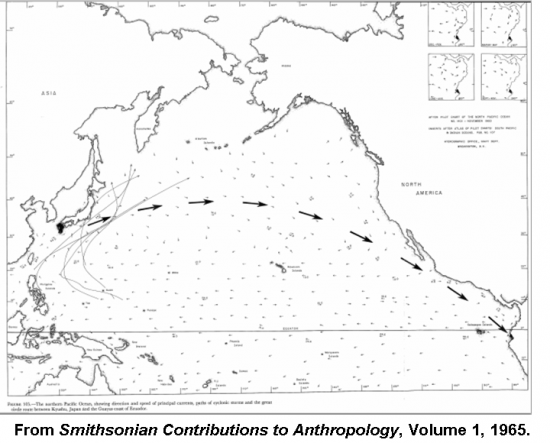 The possibility that various European, African, or Asian cultures might have “discovered” the Americas centuries or even millennia before Columbus is a wildly popular idea. Numerous books, magazines, and television programs have been devoted to the topic. Most of these claims are complete nonsense, but at least one has the distinction of having been championed by a respected archaeologist who works for the normally reputable Smithsonian Institution.

In my May column for the Columbus Dispatch, I consider the hypothesis, championed by the late Betty J. Meggers, that fishermen from Japan's Jomon culture, perhaps swept out to sea by a major storm, survived a prolonged sea voyage to end up on the shores of Ecuador where they introduced their ideas about how pottery should be made.

Meggers, writing in the Winter 1980 issue of the unfortunately short-lived magazine Early Man, described how Emilio Estrada, “a young Ecuadorian businessman” and dedicated avocational archaeologist, along with Clifford Evans, a fellow Smithsonian archaeologist, and Meggers came up with the “hypothesis of a pre-columbian introduction of pottery making from Japan to Ecuador.”

Here, in her own words, is a brief summary of how they came up with the idea: 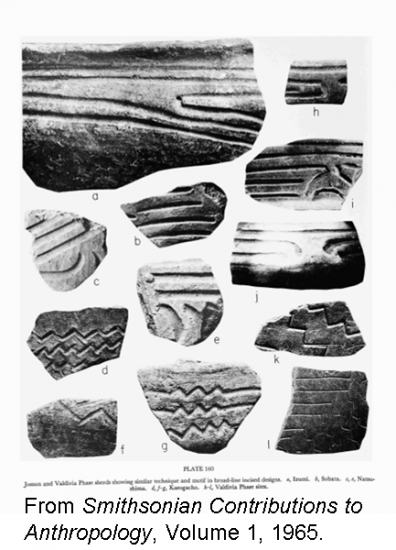 “During late 1960, Estrada undertook a large excavation atValdivia, which provided a much bigger sample of pottery from the earliest levels. The following spring, he wrote us a letter with a novel suggestion. He had encountered a report on the Jomon pottery of Japan and observed that many of the techniques and motifs of decoration were similar to those ofValdivia.

Having been taught in graduate school that transpacific contacts were irrelevant to explaining the origins of New World traits, we reacted with skepticism. When we examined his sources, however, we found to our surprise that the similarities were closer and more numerous than anything we had been able to find within theAmericas. Following the rules traditionally employed by archeologists for establishing affiliations made it necessary to infer that Jomon and Valdivia were related. This implied a transpacific contact about the beginning of the third millennium B.C.”

Among the specific decorative traits and rim treatments shared by Jomon and Valdivia pottery are the following: 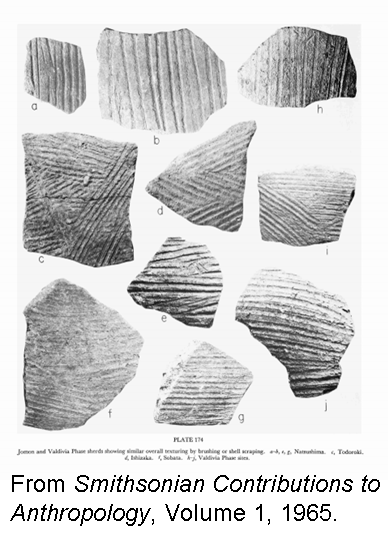 There are essentially two alternative explanations for the similarities. Either the two traditions developed independently and the similarities are entirely coincidental, or one gave rise to the other through the direct transfer of knowledge via transpacific contact.

For Meggers, the “rules traditionally employed by archaeologists for establishing affiliations” required accepting the transpacific contact hypothesis as the preferred explanation for the facts.

Those “rules,” at the time Meggers and her colleagues were developing their hypothesis, were based on the view that similarities and differences in artifacts were a simple reflection of the social identities of their makers. Therefore, the degree of similarity between artifacts at different sites provided a direct measure of the degree of the social relationships between the people living at those sites. Lewis Binford and others subsequently challenged this “cultural historical” approach to the analysis of artifacts and assemblages, but without going into this debate it seems surprising to me that Meggers could not see the difference between applying this line of reasoning to assemblages of artifacts from neighboring valleys and applying it to assemblages on opposite sides of the Pacific Ocean in the absence of other convincing evidence of contact between those distant places. Isn’t it obvious that, as a general rule, the plausibility of an argument for a cultural relationship between groups of people making similar looking artifacts would decrease with increasing geographic distance between the groups?

Given the strong arguments against the idea of pre-Columbian contacts between the Americas and the rest of the world and the long history of failure of all such arguments that had been proposed up to that time, it seems to me that Meggers and her colleagues were extraordinarily naive to think their data constituted a strong case for transpacific contact or that their arguments would convince the archaeological community.

The new genetic evidence for a possible connection between Jomon Japan and Valdivian Ecuador, which I discuss in my Dispatch column, provides a measure of vindication for Meggers, but it does not mean that the archaeological community should have accepted the evidence as it was presented in the 1960s.

Robert Pirsig has written that “the real purpose of the scientific method is to make sure Nature hasn’t misled you into thinking you know something you don’t actually know.”

Meggers thought she knew something back in 1965. She may, indeed, have been on to something, but she actually didn’t know it. The evidence was not sufficient to support her extraordinary claim.

Oddly enough, another Smithsonian archaeologist, Dennis Stanford is now making the even more extraordinary claim that the Paleolithic European Solutrean culture colonized eastern North American introducing the Clovis point to this hemisphere. The hypothesis is not widely accepted and, unlike the Jomon hypothesis, it is not supported by the genetic record.

Finally, it should go without saying (but won’t) that even if it can be confirmed that the Jomon culture did, indeed, make contact with ancient Ecuadorans, that would in no may make any of the other claims for pre-Columbian contact any more plausible. Each such claim must stand or fall on the merits of the evidence marshaled for that particular claim.

Daggett, Richard E., 1978 The life cycle of an idea: transpacific voyages and American archaeology. Journal of the Virgin IslandsArchaeological Society No. 6, pp. 13-22.