Did famine worsen the Black Death? 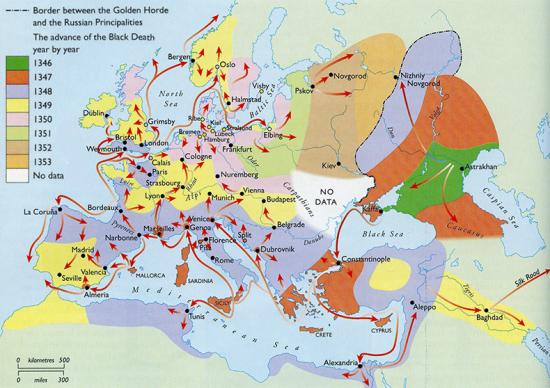 When the Black Death swept through Europe in 1347, it was one of the deadliest disease outbreaks in human history, eventually killing between a third and half of Europeans.

Prior work by investigators has traced the cause to plague-carrying fleas borne by rats that jumped ship in trading ports. In addition, historical researchers believe that famine in northern Europe before the plague came ashore may have weakened the population there and set the stage for its devastation.

Now, new research using a unique combination of ice-core data and written historical records indicates that the cool, wet weather blamed for the northern European famine actually affected a much wider area over a much longer period. The work, which researchers say is preliminary, paints a picture of a deep, prolonged food shortage in the years leading to the Black Death.

“The evidence indicates that the famine was a broader phenomenon, geographically and chronologically,” said Alexander More, a postdoctoral fellow in the Harvard History Department and a lecturer in the History of Science Department.

A widespread famine that weakened the population over decades could help explain the Black Death’s particularly high mortality. Over four or five years after arriving in Europe in 1347, the pandemic surged through the continent in waves that killed millions.

The ice-core data is part of a unique program linking traditional historical research with scientific data-collecting techniques. The program, called the Initiative for the Science of the Human Past at Harvard (SoHP), is headed by Michael McCormick, the Francis Goelet Professor of Medieval History. SoHP’s ice-core project is being conducted in collaboration with the University of Maine’s Climate Change Institute and researchers atHeidelberg University. The project’s approach puts it at the juncture of environmental science, archaeology, and history. It is supported by the Arcadia Fund of London.

More presented his findings at a conference in November arranged to discuss the project. Joining him was Harvard junior Matthew Luongo, an Earth sciences and environmental engineering concentrator from Dunster House, who discussed the discovery of volcanic tephra in the ice core. Tephra, microscopic airborne volcanic particles, are generally believed absent from cores in European glaciers, make Luongo’s assumption-puncturing discovery potentially significant.

Luongo spent several days at the Climate Change Institute last summer performing chemical analyses and examining the volcanic bits through a scanning electron microscope. Each volcanic eruption has a slightly different chemical fingerprint, so he was able to trace the tephra to the 1875 Askja eruption in Iceland, one of the largest eruptions there in history.

Since many eruptions were written about contemporaneously, the ice core’s volcanic traces can be used to align ice-core data with written records, providing greater certainty in dating other chemical traces in the ice, such as those from human activities like lead from Roman-era smelting.

“I think it was a really important project,” Luongo said.

McCormick said that the advanced technologies scientists used to understand areas like the human genome and climate change are increasingly being applied to the humanities, and opening new avenues of investigation.

McCormick was part of a team that in 2011 used tree-ring data to reconstruct European climate over the last 2,500 years, showing that the period before the fall of the Roman Empire was marked by wide climactic variability. In November, McCormick summed up the use of climate data in historical research as reading history “from the environment itself.”

“All these things are happening in the sciences and spilling over into the humanities,” McCormick said. “Twenty years ago, if you’d have told me that climate could have caused the collapse of the Roman Empire and that we would have the means to test that, I wouldn’t have believed you.”

The new data emerging from the ice core could be the first of a flood of information about the last millennium and beyond. McCormick’s University of Maine colleagues, led by Paul Mayewski, have developed a laser-based method of ice analysis. It requires far smaller samples of ice and can take 50,000 samples in a one-meter ice core, compared with just 100 in the previous method. The new technology allows much higher resolution analysis of even very thin ice layers — to the specific year and potentially to individual storms — and can go back farther than the 1500 A.D. limit of this glacier with previous techniques.

The ice core was the first ever taken specifically for historical research, McCormick said, and was drilled in 2013 from the Colle Gnifetti glacier, high in the Alps near the Swiss-Italian border. It was divided between partner organizations, with the portion allocated to the Initiative for the Science of the Human Past and the Climate Change Institute being held at the University of Maine.

The findings about the period preceding the Black Death described by More continue to fill in an emerging and newly complex picture of a key period in human history. Recent research has traced the genesis of the European plague to animal groups in Asia and climate-related outbreaks that traveled along Silk Road trade routes.

McCormick said this application of scientific methods opens new avenues of inquiry, akin to discovering colossal collections of historical records, whether read directly from the DNA of ancient people, from the trees that grew at the time, or from the ice deposited in ancient storms.

“It’s a gigantic set of archives that document the least-documented part of [history],” McCormick said. “It’s kind of a renaissance of history.”