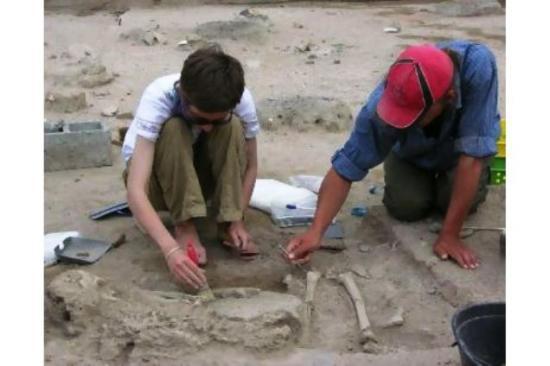 The findings of two major archaeological digs being carried out in a region of Dibba are likely to shed more light on the history of the area.

A pre-Islamic settlement and a second area dating from about the 15th century are being excavated in Dibba al Hisn by officials from Sharjah's Department of Culture. While little is known about the antiquity of the region, a popular trading destination for thousands of years, that could change once the excavation is complete.

"This work gives us a new history about the region, especially in Dibba where there has not been enough information," said Eisa Abbas Yousef, the department's officer of archaeological sites. "It's a very exciting development."

The excavation on the 15th century settlement in Sharjah is being conducted with a group of archeologists from Japan. Work is being done in the upper layer of the dig with more layers underneath waiting to be unearthed, Mr Yousef said.

Archaeological work in Dibba al Hisn, a densely populated area on the Gulf of Oman, started in 2004 when a local resident found a piece of pottery in his garden. His home was soon sold to the government and experts from Sharjah and Germany began excavation at the site.

They found a large ancient tomb dating from around the first century AD, which led to further digging. A settlement from the pre-Islamic era was then found nearby. Several artefacts have been recovered from the site which suggest there was early trade with both the Roman and Mesopotamian empires.

Excavation on the settlement is limited to an area of 20 square metres and it is unknown how large the village is, said Dr Sabah Jasim, the culture department's head of antiquities.

"If the department decided to broaden the excavations we will have to negotiate with the owners nearby on possessing the houses," he said. "This has happened in other areas and could happen again."

It is believed that the grave site discovered earlier was a burial chamber for those who lived in the settlement. An anthropological study of the tomb was published last year by the German academics Adelina Kutterer and Margarethe Uerpmann, four years after the archeological work had concluded.

Ms Kutterer said the graves shed some light on a hitherto unknown period in the history of the Emirates. "All periods of UAE history are fascinating, since it is of great interest how people dealt with the living conditions in such a marginal environment through the ages," she said. "From the post-Hellenistic period very few human remains and other records were recovered until now. Therefore, the human skeletons from the Dibba grave, as well as the archaeological findings, are very important."

The exact age of the tomb cannot be established through radiocarbon dating, although it tallies with studies done on other graves found in the Umm al Qaiwain area.

Ms Kutterer was able to establish that it was pre-Islamic at the very least by the orientation of the bodies and the filing of the teeth of one skeleton, a practice later prohibited under Islam.