Determinants of skull development and form 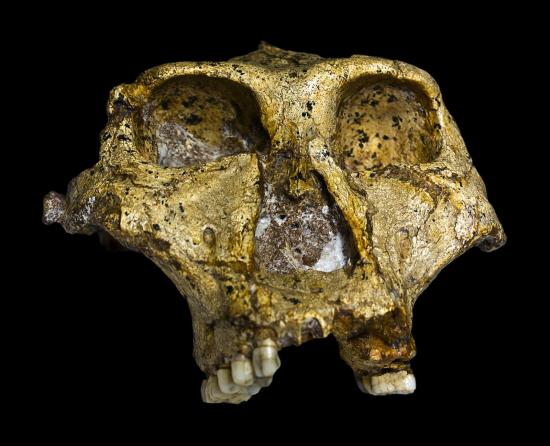 Ravosa notes that the robust jaws and large, thick-enameled molars of the first human ancestors from Africa, known as australopiths, have long been interpreted as adaptations for hard object feeding, especially in the genus Paranthropus robustus, and to a lesser extent, Australopithecus.

Recent studies of molar surface microware indicate that only Paranthropus robustus regularly ate hard items, suggesting that the oral anatomy of other australopiths reflected rare, seasonal exploitations of hard fallback foods. Fallback foods are typically more mechanically challenging than diets exploited on a more annual basis and are critical to survive seasonal periods when easier-to-process preferred resources are scarce. The ecological and morphological importance of fallback foods have been implicated in a number of recent studies of living and fossil mammals.

“In contrast to this highly influential hypothesis about australopith feeding adaptations, our study demonstrated that hard object feeding cannot explain the extreme morphology of Paranthropus boisei,” Ravosa said. “Rather, analysis of long-term dietary plasticity in an animal model — in this case, rabbits — suggests year-round reliance on tough foods requiring prolonged post-canine processing in Paranthropus boisei. Increased consumption of such food items may have marked the transition from the earlier hominids Ardipithecus to Australopithecus, with routine hard object feeding in Paranthropus robustus representing a novel behavior.”

Prior research in Ravosa’s lab has focused on diet-induced plasticity in the skull and feeding complex in growing rabbits and rodents. These kinds of studies are important for evaluating the functional significance of various craniofacial features, particularly those less accessible via more direct in vivo approaches, as well as for unraveling the feeding behavior of extinct species.

“However, prior to our present investigation, we’d not been able to track dietary influences on the growing skull in the same individual (i.e., longitudinally), we’d not modeled seasonal variation in dietary properties, and we’d not tracked dietary effects for an entire year (i.e., from weaning until middle age),” Ravosa said. “These aspects of our study were novel vs. all other such work, in our lab and elsewhere, and facilitated a more naturalistic perspective on ecological determinants of postnatal and evolutionary changes in mammalian skull form. By being able to track the extent to which morphological changes in the cranium track (or do not track) dietary changes, we were also able to evaluate the extent to which skeletal structure can be used to infer behavior in the fossil record, a common assumption that surprisingly is largely untested.

“While my lab has long focused on functional determinants of phenotypic variation in skull form in primate and non-primate mammals, it has rarely focused on human evolution. However, as the notion that seasonal variation in the presence of hard/tough diets explains the robust jaws and teeth of early human ancestors (australopiths) has become widely accepted, our rabbit study is of particularly unique relevance for addressing such outstanding questions.”