Burial of a man found within an Archaic period sanctuary in Despotiko, Antiparos 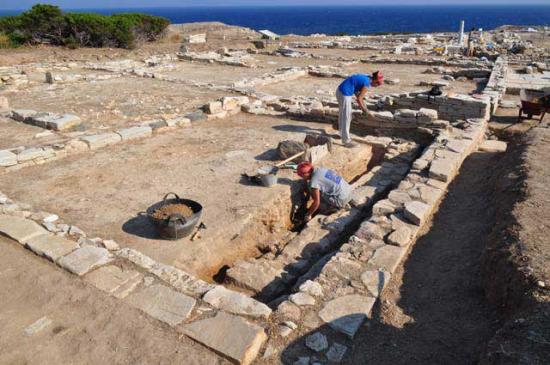 View of the excavations at the southern complex on Despotikon.

A millenium-old mystery has been proven the discovery of a male burial within an Archaic period sanctuary in the Aegean islet of Despoticon, near Antiparos.

According to archaeologist Yiannos Kouragios, who excavates the site since 1997, the burial’s position 1,5 m. deep under the sanctuary’s main cult chamber is what puzzles archaeologists, since, although such a practice seems to be applied only to somebody of great importance for the cult practiced on the site, this burial was relatively poor, bearing no grave goods and placed straight on the ground.

The deceased had been placed in a foetal position, its left leg bent to the south and its hands folded on his chest. According to Mr. Kouragios, a first thought is to identify him with a workman who died during the sanctuary’s construction and was buried straight afterwards. However, nobody can verify this opinion since the skeletal material cannot be moved due to its sensitivity and it is impossible to perform any tests.

Another of Mr. Kouragios surprise finds is that the Despotikon temple seems to have been built on another building. “Although the sanctuary flourished during the Archaic era, actually on the 6th century BC, the 2011 and 2012 excavations demonstrated its use since the Geometric period, as in front of the temple’s platform and under its foundation as well as under the South Complex bath, 8th century buildings have been revealed”, alongside a large number of pottery sherds.

The statements above present several reasons that led the Central Archaeological Council to allow the Despotikon excavation to continue for five more years. Still, apart from the sanctuary itself, there is a great interest concerning the numerous marble statues used as votive offerings during the Antiquity and of which more than 40 fragments (especially legs, thighs, arms, hands and torso parts belonging to “Kouroi”) have been revealed.

“Despotikon has a unique pro, not met in most of island archaeological sites: it is not situated in close proximity to a modern settlement. Nature and history are making a harmonic ensemble which has survived across the centuries”, says Mr. Kouragios.