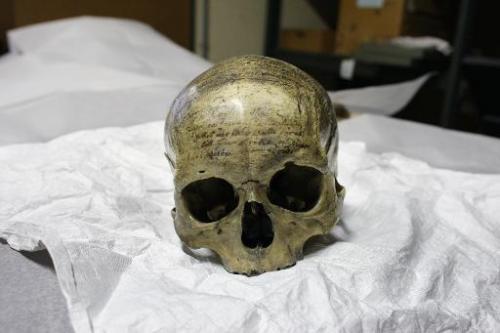 The skull of French philosopher, mathematician and physicist Rene Descartes, seen at Musee de l'Homme (Museum of Mankind) on March 5, 2009 in Paris

After digging up the past of Joan of Arc, Richard the Lionheart and Napoleon Bonaparte, a top forensic sleuth on Friday unveiled a medical secret of Rene Descartes, a founder of modern philosophy.

A hi-tech scan of Descartes' skull revealed he had a massive bony growth in his right sinus, lodged near the bridge of his nose, French medical anthropologist Philippe Charlier reported in The Lancet.

The 17th-century French mathematician blazed the trail for rationalism with his work "Discourse on the Method," which spelt out the dictum "Je pense, donc je suis"—"I think, therefore I am."

Descartes' skull, housed in the National Museum of Natural History in Paris since 1821, was scanned using computed tomography, which uses X-rays to build a slice-by-slice image of an object.

Known as an osteoma, a sinus tumour can cause a blocked nose, "excess mucus," a change in the sense of smell, facial pain and weepy eyes, they said.

"Biographers have not described such symptoms in Rene Descartes, apart from one possible isolated episode of migraine with aura on the night of November 10 1619," characterised by sudden visual and auditory hallucinations, the letter in The Lancet said.

Despite its enormous size, the tumour is unlikely to have played a part in his death, the inquiry concluded.

Descartes was recorded as having died of pneumonia.

Charlier said more secrets may be teased out of the ancient remains.

"Our investigations should open the way to a functional and physiological analysis of the individual who lived in this skull," he told AFP.

Charlier, of the University of Versailles at St. Quentin, west of Paris, specialises in exploring riddles thrown up by historical relics.

He previously determined that Vatican-authenticated bone fragments said to have come from Joan of Arc, the patron saint of France who was burned at the stake by the English, came from a cat and an Egyptian mummy.

He also crushed the folklore that said Napoleon was fatally poisoned by his English captors.

The powdery remains of the heart of England's Richard I, discovered in 1938 during an excavation of Rouen Cathedral, revealed the organ had been embalmed and treated with frankincense, showing it was handled with holy reverence.

Charlier also found the revolutionary Maximilien de Robespierre probably suffered from a crippling auto-immune disorder called sarcoidosis—a disease that may have played an indirect part in his downfall.

To his critics, Robespierre, an architect of the Terror, was responsible for the summary execution of thousands for revolutionary crimes.

To his defenders, he was "the Incorruptible" who defended the values of the Revolution to the end.