On the western fringes of Siberia, the Stone Age Denisova cave has surrendered precious treasure: a toe bone that could shed light on early humans' promiscuous relations with their hominin cousins.

New Scientist has learned that the bone is now in the care of Svante Pääbo at the Max Planck Institute for Evolutionary Anthropology in Leipzig, Germany, who revealed the first genetic evidence of interbreeding between ancient humans and other hominins (New Scientist, 30 July, p 34).

There are tantalising hints that the find strengthens the case for a third major group of hominins circulating in Eurasia at the same time as early humans and the Neanderthals. It might possibly even prove all three groups were interbreeding 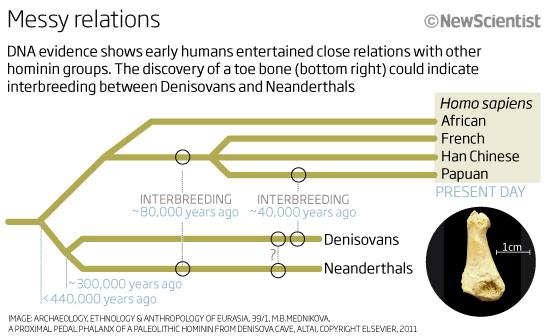 The Denisova cave had already yielded a fossil tooth and finger bone, in 2000 and 2008. Last year, Pääbo's DNA analysis suggested both belonged to a previously unknown group of hominins, the Denisovans. The new bone, an extremely rare find, looks likely to belong to the same group.

The primitive morphology of the 30,000 to 50,000-year-old Denisovan finger bone and tooth indicates that Denisovans separated from the Neanderthals roughly 300,000 years ago. At the time of the analysis, Pääbo speculated that they came to occupy large parts of east Asia at a time when Europe and western Asia were dominated by Neanderthals. By 40,000 years ago, Homo sapiens was also moving around much of the region. But the Denisovans remain known only from the finger and tooth fossils - not enough information to formally assign them to their own species.

That may change with analysis of the newly discovered toe bone. It was found in the same layer of the cave floor as the finger bone, by Maria Mednikova at the Russian Academy of Sciences in Moscow (Archaeology, Ethnology and Anthropology of Eurasia, vol 39, p 129).

Mednikova says this suggests it belonged to a contemporary individual, alive roughly 40,000 years ago. But her studies show the finger and toe bones belonged to distinct people. In addition, the toe bone is stocky and its shape is somewhere between that of a modern human and a typical Neanderthal.

Others are less convinced. Erik Trinkaus at Washington University in St Louis, Missouri, who has written extensively on hominin foot bone morphology, says the bone's sturdy appearance is interesting but inconclusive from a taxonomic perspective.

What's needed is DNA evidence. For now, though, Pääbo's team remain very tight-lipped about what, if anything, they have found. "We have no results we are ready to talk about yet," Pääbo told New Scientist. Mednikova saw some of the team's preliminary findings last month and promises a "wonderful result" will be published in the near future - although with the analysis still under review she can say no more.

Her enthusiasm suggests that Pääbo's team has successfully extracted DNA from the toe bone, and hints that it shows that this was no ordinary hominin. At the very least, one can presume it doesn't belong to a human or a Neanderthal.

"The Neanderthals came to the Altai mountains [in Siberia] about 45,000 years ago and were probably assimilated by the native Denisovan population," she says. "It cannot be excluded that the individual was Denisovan, Neanderthal or even a hybrid - why not?"

If the Stone Age toe really did belong to a Neanderthal-Denisovan hybrid, it would be a remarkable find. Pääbo is fast building a reputation for revealing Homo sapiens' promiscuous past. He has shown that humans and Neanderthals interbred, as did humans and Denisovans. Until the latest analysis is published, we can only speculate on what has been found. But the human family tree could be about to get even more complicated. If so, there may be a case for reclassifying all three as members of the same species.