Researchers have discovered evidence of a distinct group of "archaic" humans existing outside of Africa more than 30,000 years ago at a time when Neanderthals are thought to have dominated Europe and Asia. But genetic testing shows that members of this new group were not Neanderthals, and they interbred with the ancestors of some modern humans who are alive today.

An international team of scientists led by Svante Pääbo at the Max Planck Institute of Evolutionary Anthropology in Leipzig, Germany, used a combination of genetic data and dental analysis to identify a previously unknown population of early humans, whom the researchers call "Denisovans." The name was taken from Denisova Cave in southern Siberia where archaeologists from the Russian Academy of Sciences recovered a bone in 2008. 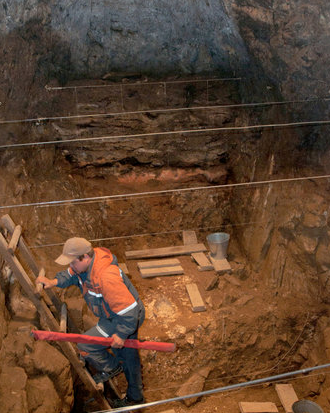 Genetic sequencing of DNA extracted from a finger bone of a 5-10-year-old girl from the cave revealed that she was neither Neanderthal nor a modern human, but shared an ancient origin with Neanderthals. The genetic analysis also showed she had a very different history since splitting from Neanderthals, the researchers concluded. 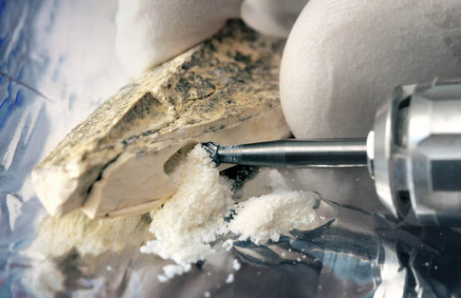 A tooth, also found in the Denisova Cave, complemented the genetic evidence. "The tooth is just amazing," said Bence Viola, a paleoanthropologist at the Max Planck Institute. "It allows us to connect the morphological and genetic information." 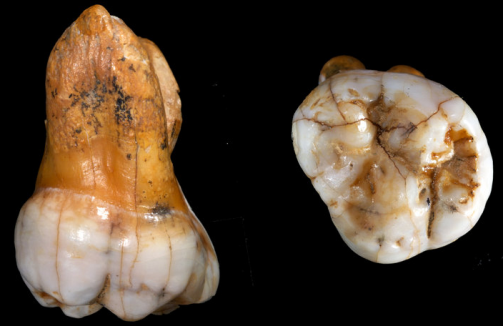 Analysis of the tooth revealed a shape that falls outside normal tooth variation typically seen in Neanderthals and modern humans, providing further evidence the Denisova hominins are an evolutionarily distinct group.

Another type of analysis reported by the study's authors showed Denisovans contributed 4-6 percent of their genetic material to the genomes of present-day New Guineans. "They are ancestors of people in Papua New Guinea but not of the great majority of people in Eurasia," said David Reich, a geneticist at Harvard Medical School in Boston, who led the research's population genetics analysis.

By comparing the genetic material of the Denisovans to diverse modern humans, the authors disclose a previously uncharacterized episode of gene flow between "archaic" and modern humans.

Until last year, the mainstream view in genetics was that modern humans inherited essentially their entire DNA makeup from Neanderthal-related individuals when they migrated from Africa 40,000-55,000 years ago. It was surmised they completely replaced the humans who migrated before them, including the Neanderthals whose ancestors likely made the pilgrimage hundreds of thousands of years earlier.

But sequencing and analysis of the Neanderthal genome earlier this year showed this was not the case. Neanderthals were not completely replaced, but instead contributed 1-4 percent of their genetic material to all modern non-Africans before dying out. The finding, based on Neanderthals discovered at Vindija Cave in Croatia, showed that modern humans outside of Africa are not all descended from a single out-of-Africa migration.

The new research suggests rather than being an irregular occurrence, intermixing between diverged human populations may have been common. "In combination with the Neanderthal genome sequence, the Denisovan genome suggests a complex picture of genetic interactions between our ancestors and different ancient hominin groups," said Pääbo, a founder of the field of ancient DNA.

Denisovans are likely to have been widespread across a broad swath of Eurasia, since Denisovans must have existed not just in Siberia, but also thousands of miles to the south along the path of modern humans migrating out of Africa on the way to New Guinea. However, far less is known about this population archaeologically or morphologically than about the Neandertals and modern humans who were their contemporaries in western Eurasian and in Africa.

"We hope that these results will spur archaeologists and paleontologists to study sites occupied by Denisovans," said Reich. "All we have now is a finger bone, a tooth, and a genome.  However, we now know that this population existed, and new archaeological discoveries should reveal much more about their morphology and material culture."

"Technically, the discovery and definition of this new population based on its DNA patterns--rather than morphology--is also fascinating," said Reich. Traditionally, hominin populations are defined based on studies of their physical form and structure. Defining them based on DNA is something made possible only by recent advances in DNA technology, and may be a harbinger for the future. 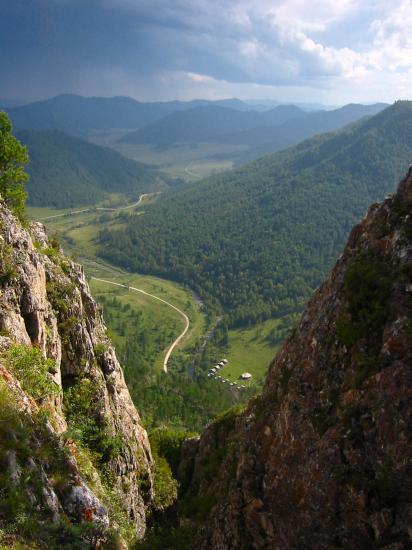 There are several archeological sites in the region of southern Siberia's Altai Mountains that may date up to 500,000 years ago. Some scientists claim there are sites that may even date to 800,000 years ago. Credit: Bence Viola, Max Planck Institute for Evolutionary Anthropologyn Branch, Novosibirsk, Russia. 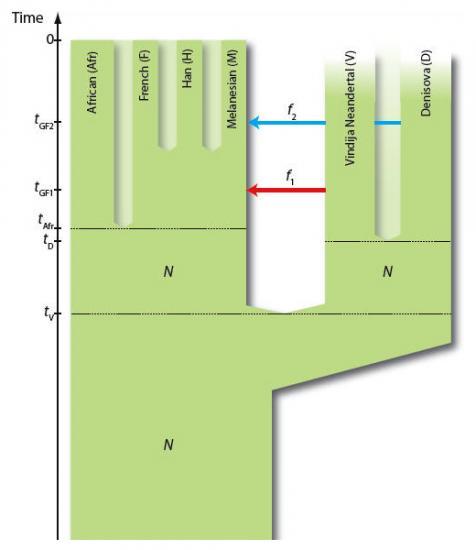 Sequencing and analysis of genetic material extracted from Neanderthals recovered at Vindija Cave in Croatia showed that modern non-Africans--Han Chinese, French Europeans and Papua New Guineans--have inherited 1-4 percent of their genes from Neanderthals, probably due to interbreeding that occurred in the ancestral population of all non-Africans in the Levant or in north Africa. Now, scientists have also discovered that Denisovans contributed 4-6 percent of their genetic material to the genomes of present-day New Guineans, thus identifying a second gene flow event.