Researchers find clues to trade, markets of region’s past. 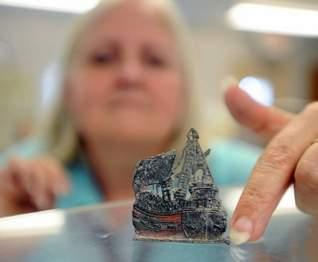 Delaware state archaeologist Faye Stocum shows a small cast pewter ship recovered from the shipwreck off Lewes. The many artifacts recovered help paint a picture of life in the 1770s. (The News Journal/GARY EMEIGH)

The wine: imported from South Africa ; the porcelain from China, the bottled water from Germany. 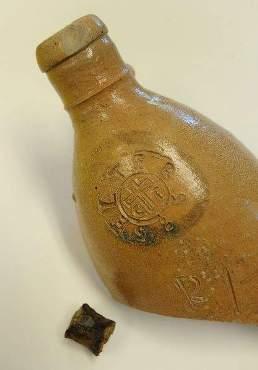 A mineral water bottle found at the shipwreck site bears a stamp that shows it was made in Ransbach, Germany. (The News Journal/GARY EMEIGH)

More evidence of a global economy ?

This global economy was vibrant in the 1770s and researchers have found clear evidence of it at the bottom of the sea with a Lewes shipwreck, discovered by accident during a U.S. Army Corps of Engineers beach replenishment project in 2004.

"History repeats itself," said Faye Stocum, a state archaeologist who is working on the project.

As it turns out, the Roosevelt Inlet Shipwreck is a significant historical resource for researchers and historians who want to learn more about British mercantilism in the colonies, what types of commodities colonists in places like Philadelphia and Delaware were buying and what went wrong with this fragile economic system that eventually led to the Revolutionary War.

It is the first British merchant ship from the time period that archaeologists have been able to explore and study.

The remains of the ship still rest just off the beach in about 15 feet of water near Roosevelt Inlet. But thousands of artifacts -- many of them glass and pottery shards -- were pumped to dry land along with sand borrowed to restore the beaches. Six years later, artifacts are still washing onto the beach.

The wreck site was listed on the National Register of Historic Places in Nov. 2006.

Archaeologists with Southeastern Archaeological Research Inc., the Florida consulting company that was hired by the state, suggest that only a small part of the hull remains intact. They estimate than some 40,000 artifacts were recovered -- much of it material that ended up on the beach or washed in later.

The state's consultant completed a historic review of the wreck site during the spring and was reluctant to pinpoint the identity of the vessel. The consultant points to 31 possibilities from the hundreds of vessels that sank in Delaware Bay in the 18th and early 19th centuries. They suggest the ship may have been Dutch -- based upon the large number of Dutch-made tobacco pipes that were recovered and the thought that the ship may date from the Revolutionary War at a time when trade with England would have been limited. The consultants suggest that Dutch tobacco pipes were not common in the MidAtlantic except during the Revolution and immediately following it. 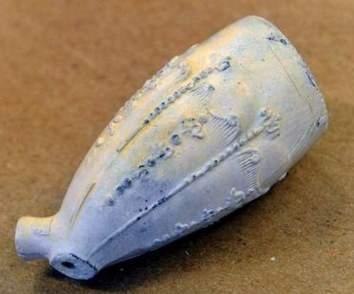 Many clay tobacco pipes from the Netherlands were found at the site. This one bears the mark of Dutch pipemaker Willem Schippers. (The News Journal/GARY EMEIGH)

But former state Director of Historical and Cultural Affairs Daniel Griffith believes the shipwreck is the Severn, a British merchant ship that sunk in 1774. In Griffith's view, the only missing link is an object from the wreck site that bears the vessel's name.

A graduate student at Texas A & M University reached a similar conclusion in her 2008 thesis.

Based upon the artifacts, Bridget McVae Johnson concluded it was "highly unlikely is it not the Severn."

Johnson, who now works as a marine archaeologist, interned with state officials and worked on the wreck artifacts one summer while a student. The artifacts help to date the ship and tell the story of commerce in the leadup to the Revolutionary War.

Frankfurter ware -- an earthen ware with a green or yellow glaze, was first produced in Germany around 1760. The shards from the Lewes wreck are the first ever found in North America, McVae said.

Creamware, which was manufactured by Josiah Wedgwood as a less costly option to Chinese Porcelain, was first manufactured in 1762. State officials and beachcombers found hundreds of examples of creamware. 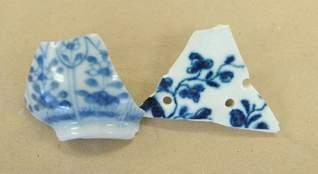 Both Chinese porcelain (left) and the less costly British creamware were found among artifacts of the wreck. (The News Journal/GARY EMEIGH)

McVae even found an advertisement: "Queensware, recently imported from England" from 1772 in a Philadelphia journal. Queensware was another name for creamware.

Clay tobacco pipes also were found in large numbers. All were Dutch and many bore maker's marks that helped researchers date the cargo. One of the pipe fragments is marked GLM and is registered to pipemaker Garrett Maarling. He registered with the guild in 1769.

Among the discoveries were two dated artifacts. One was a token from Holland, marked 1768. Another was a button, likely from Spain, dated 1772.

Another important discovery was something not found in the fragments. There was no pearlware -- another Josiah Wedgwood product -- that was manufactured starting in 1779.

Because there were no signs or weapons, she concluded the ship wasn't a war ship or one that was trading during war.

State officials believe the ship was probably running a regular trade route between England and Philadelphia just as the politics of mercantilism were reaching a tipping point.

The British required anything coming to the colonies to pass through a British port first, Fithian, the state curator of archeology, said.

Goods from England and the rest of the world were shipped to the colonies while raw materials were shipped out, he said.

McVae focused much of her research on events of the time and concluded that had the Severn arrived in Philadelphia, rather than sinking in Delaware Bay, it would have landed at a politically charged time. Philadelphia residents recently had hanged effigies of two British, colonial leaders amid a controversy that involved the dismissal of Benjamin Franklin as Postmaster.

"Had it reached Philadelphia, instead of sinking in Delaware Bay on the 4th of May, there is no telling how merchants and citizens would have reacted to a ship laden with British consumer goods arriving in port only days following a politically charged display of violence against the home country," McVae wrote in her thesis.

Instead, a late season snow storm hit the region in May 1774. The Severn sank but the captain and crew were saved.

What was left behind is like a time capsule of world markets in 1774.

Fithian said that as the artifacts were discovered on the beach, people kept finding glass medallions. It read: Croot Constantia.

Turns out they were from wine bottles.

"This wine was very popular in Europe," Stocum said.

The company is still in business and this same style of wine is now a sweet, desert wine.

One of Stocum's favorite pieces is a button with a caricature of a man's face and the date 1772. It reads: Paseo Del Retiro. That is a park in Madrid and Stocum believes the caricature is the 17th century Spanish novelist and playwright Miguel de Cervantes.

There is a thimble in the collection that may be from Austria and another artifact that has the double eagle emblem of Russia. There is apple green pottery that is similar to pottery made in France.

Griffith said he's convinced the ship is the Severn even without concrete evidence like a ship's bell or other identifier.

"In archaeology, it's all about probability," he said. "Everything fits."