By combining an analysis of written artifacts with a study of skeletal remains, Stanford postdoctoral scholar Anne Austin is creating a detailed picture of care and medicine in the ancient world. 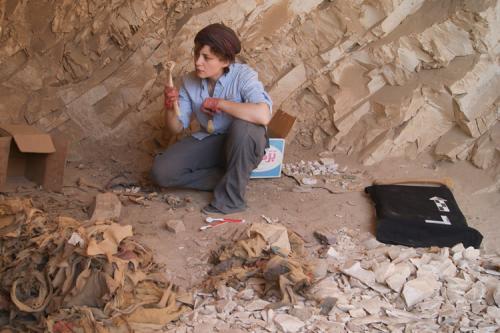 The craftsmen who built Egyptian pharaohs' royal tombs across the Nile from the modern city of Luxor worked under grueling conditions, but they could also take a paid sick day or visit a "clinic" for a free checkup.

For decades, Egyptologists have seen evidence of these health care benefits in the well preserved written records from the site, but Austin, a specialist in osteo-archaeology (the study of ancient bones), led the first detailed study of human remains at the site.

A postdoctoral scholar in the Department of History, Austin compared Deir el-Medina's well-known textual artifacts to physical evidence of health and disease to create a newly comprehensive picture of how Egyptian workers lived. Austin is continuing her research during her tenure as a fellow in the Andrew W. Mellon Fellowship of Scholars in the Humanities.

In skeletal remains that she found in the village's cemeteries, Austin saw "evidence for state-subsidized health care among these workers, but also significant occupational stress fueled by pressure from the state to work."

Daily work and payment records corroborate the physical evidence: Deir el-Medina's men had uniquely comprehensive health care, but sometimes could not take advantage of it.

For example, Austin saw in one mummy evidence of osteomyelitis – inflammation in the bone due to blood-borne infection; the man clearly had been working while this infection was ravaging his body. "The remains suggest that he would have been working during the development of this infection," Austin said. "Rather than take time off, for whatever reason, he kept going."

The workers received paid sick leave, as we know from the written records, but they "nonetheless felt pressure to work through illness, perhaps to fulfill tacit obligations to the state to which they owed so much."

"The more I learn about Egypt, the more similar I think ancient Egyptian society is to modern American society," Austin said. "Things we consider creations of the modern condition, such as health care and labor strikes, are also visible so far in the past."

Evidence in the bones

Deir el-Medina, an hour's climb across the mountainside that looms above Egypt's Valley of the Kings, housed workers primarily in the 19th and 20th dynasties (1292-1077 BCE). Its heyday is later than the valley's best-known occupant, Tutankhamun, but contemporaneous with the pharaoh who was arguably Egypt's greatest, Ramesses II, and his long line of successors.

Deir el-Medina's skilled workers had considerable engineering knowledge and an uncommon degree of literacy. They left tens of thousands of written records – bills, personal letters, lawsuits and prayers, on shards of clay, stone flakes and scraps of papyrus.

Burial sites at Deir el-Medina were excavated from 1922 to 1951 by the French Egyptologist Bernard Bruyère, but the science of osteology was then in its infancy, and Bruyère left many of the bodies unstudied in their tombs.

Austin found tombs "crowded with bats, rats and mummies" when she visited these tombs in 2012 for her UCLA dissertation research, which was funded by the American Research Center in Egypt. Many of the mummies were little more than skeletons, allowing Austin to clearly see the state of the people’s health as evidenced in their bones.

In many bodies Austin saw evidence of stress from the hard climb – today it's a thousand stone steps – from Deir el-Medina to the Valley of the Kings and back again. As Austin found, incidence of arthritis in the knees and ankles of the men at Deir el-Medina was significantly higher than for working populations from other Egyptian cemeteries.

The bones also revealed clues that corroborate other scholars' findings that severely disabled Egyptians were well cared for.

"I found the remains of a man who died at the age of 19 or 20 and was born without a useful right leg, presumably because of polio or another neuromuscular disorder," Austin said.

"To work in the royal tombs, which was the entire purpose of the village, he would have had to climb," Austin said. But in examination of the young man's skeleton, she saw "no signs of other health issues, or of having lived a hard life. That suggests to me that they found a role for him in this community even though the predominant role, of working in the tombs, could not be met."

Austin's research into the history of social health care invites larger discussion about how ancient peoples viewed health and disease, as well as the link between affluence and social responsibility.

"A woman named Naunakhte had eight children," Austin said. "In her will, she chastised and disinherited four of them for neglecting her in her old age."

"At Deir el-Medina, we see two health care networks happening," Austin said. "There's a professional, state-subsidized network so the state can get what it wants – a nice tomb for the king. Parallel to this, there's a private network of families and friends. And this network has pressure to take care of its members, for fear of public shaming, such as being divorced for neglect or even disinherited."

Austin finds Egyptians' ideas about health care particularly compelling and fruitful for discussion because, she argues, their ideas about disease were much like ours.

While the Greeks believed that disease stemmed from an imbalance of bodily fluids, she said, "Egyptians thought about it as a kind of contamination of the body. To get better, instead of balancing yourself, you had to purge yourself of the contaminant."

For example, a doctor in the medical text known as the Edwin Smith Papyrus treats a patient with an open wound over a broken arm by placing ground ostrich-egg shell in the wound and pronouncing, "Repelled is the enemy that is in the wound; cast out is the evil that is in the blood."

"It's very similar to modern germ theory," Austin said. "It shows an awareness of disease as being external."

In March, she will return to Deir el-Medina in collaboration with Egyptologist Salima Ikram of the American University in Cairo to study more remains in hope of identifying specific diseases.

"Egypt has a complex civilization, a written tradition and a long history of study," Austin said. "The further away Egypt is and the more we learn, the more relatable it is and thus the more fascinating it is to me." Austin and her students will be exploring our broader fascination with Egypt in her winter quarter course, Egyptomania! The Allure of Egypt over the Past 3,500 years.