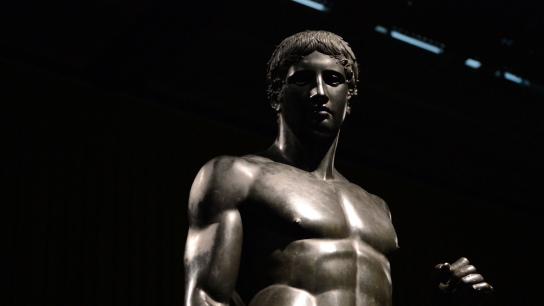 Detail of a Bronze reconstruction of around 1920 by George Römer of the Doryphoros or ‘spear-bearer’ by Polykleitos, made around 440–430 BC. H 212 cm. Ludwig-Maximilians-Universität, Munich

Defining beauty: the body in ancient Greek art is the first major temporary exhibition of sculpture at the British Museum since Hadrian: Empire & Conflict in 2008. It is also the first sculpture show in the new Sainsbury Exhibitions Gallery (Room 30). For the Museum’s Exhibitions team this is the culmination of over a year of intensive work with the exhibition’s designers, Caruso St John architects and Matt Bigg, Surface 3 graphics. 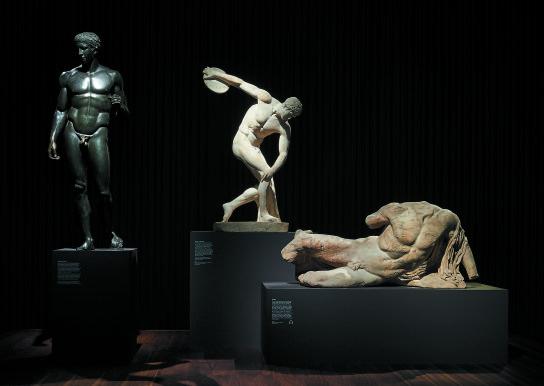 The exhibition presents some of the most beautiful and best-loved classical sculpture in the Museum’s collection. It includes some key pieces that have been temporarily removed from the permanent galleries to be juxtaposed for the very first and perhaps the only time, with loans of similar international significance. The movement of such important sculptures from the permanent day-lit galleries, into the controlled lighting environment of the Sainsbury Exhibitions Gallery presented the Exhibitions team with a unique opportunity to experiment with their display.

Through the design brief we challenged the designers to explore how they could present the objects differently, using dramatic lighting and by experimenting with display heights. We encouraged them to exploit the scale of the Sainsbury Exhibitions Gallery, in particular the 6-metre height and the very flexible lighting system, to encourage visitors to engage with these very familiar objects in a new way and at a deeper level. 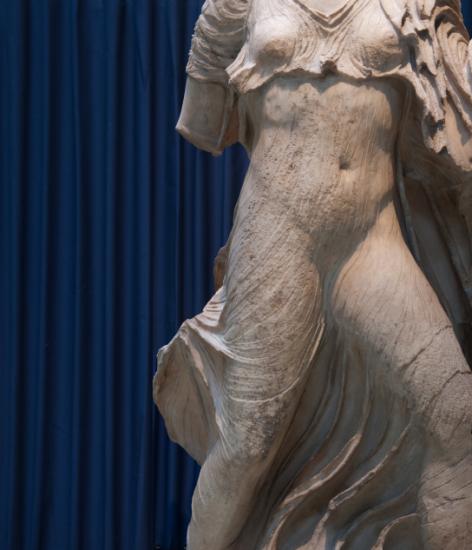 It took many months to develop the design scheme. This included trying colours and fabrics against the objects, working up scale drawings of each object group, building a scale model and mocking up full-size elements of the design. We used our new purpose-built mock-up room, adjacent to the new gallery, which has the exact ceiling and floor specification of the gallery itself, to test the plinth heights and lighting.

The result is a scheme that transforms the way we see familiar objects in the collection. The designers have achieved this through the use of colour, lighting and displaying the sculpture at height. Many of the sculptures are lifted to 1.5 metres (approximately shoulder height) and our relationship to them is immediately transformed. The objects are lit from the ceiling track and not the space around them. This privileges them and makes them visible on key vistas – for instance, the Amazon can be seen at the west end of the gallery at a distance of 20 metres or more. 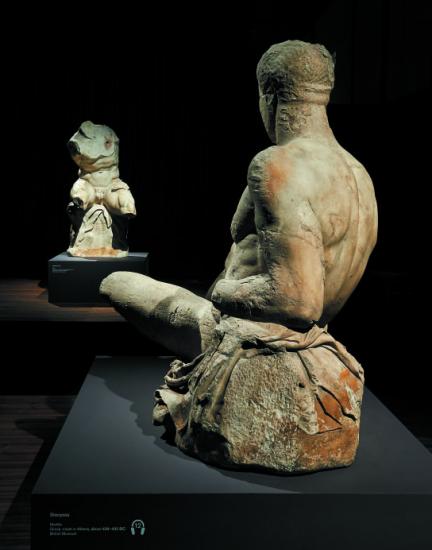 Sculptures on display in the exhibition Foreground: Marble statue of Dionysos from the east pediment of the Parthenon. Greek, about 438–432 BC, from the Acropolis, Athens. L 174 cm, H 127 cm. British Museum, London 1816,0610.93Background: Belvedere Torso, 1st century BC. Marble copy after a Greek bronze, probably of the early 2nd century BC. H (including base) 156.5 cm, W 87.5 cm. Vatican Museums, Vatican City

The exhibition may not offer the definitive answer to the successful display of sculpture in all circumstances, but what it has done is given us a wonderful opportunity to display these sculptures for a short period, in a new and thought-provoking way.