The Roots of Art in Ancient Egypt

How art begins is one of mankind’s greatest enigmas to which an answer has yet to be found. 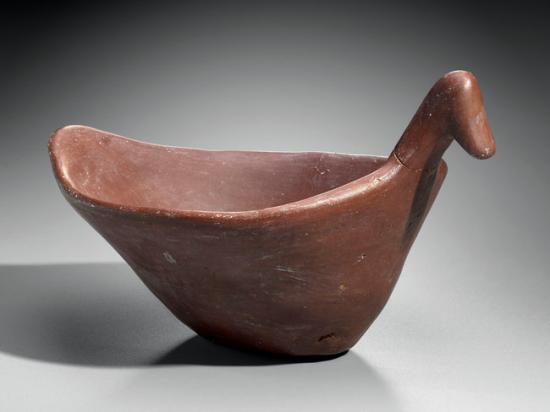 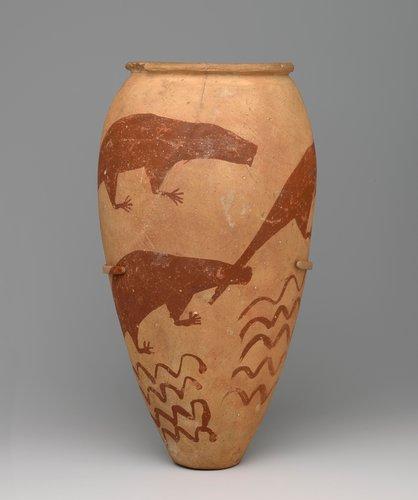 An earthenware jar decorated with crocodiles and snakes was probably made  between 3100 and 3300 B.C. Brooklyn Museum, New York

If there is any hope of discovering the process out of which it emerges, ancient Egypt might be the place that will yield some clues.

The admirable show, “Dawn of Egyptian Art,” put together at the Metropolitan Museum of Art by Diana Craig Patch, reveals a world of seething artistic creation headed in multiple directions. Much of it bears no recognizable connection to the statuary and objects from Egypt under its historic dynasties.

The most startling revelation is the simultaneous existence by the end of the fourth millennium B.C. of pure abstraction, highly stylized figuration and representational art close to nature.

All three trends are occasionally observed side by side on a single object.

A large earthenware vessel from Naqada, a site north of Luxor in Upper Egypt, is thus painted with some abstract motifs above a group of simplified human figures. Around and below them, desert goats are accurately rendered with their characteristic twisted horns. The vessel was created around 3300-3200 B.C.

During the centuries that preceded it, Egyptian artists had been exploring radically different avenues.

A stone jar carved between 3650 and 3300 B.C. displays a stunning aptitude at reducing animal form to near abstraction, with a surreal twist that anticipates 20th-century avant-garde art. With its round eyes and curving tusks, it conjures the image of an elephant. The image conveys a distinct sense of hilarity. This comes out even more definitely in a gray stone palette shaped as an animal. To Ms. Patch, this is a lion. Others might be tempted to see it as a hippopotamus with its massive back and enormous head.

There was no limit to the ancient Egyptian love of drollery in animal form. A small squat jar designed like a turtle looking up with its round eyes beats Walt Disney cartoons by a long chalk.

By contrast, the monumental statue of a bird about 201/2 inches, or 50 centimeters, high carved out of limestone projects a brutal force that is almost overwhelming. Excavated at Coptos in the Naqada area, it dates from the last three centuries or so of the fourth millennium B.C. Whether it is more or less contemporary with the amusing turtle is uncertain — early excavation reports do not always come up with a high degree of precision.

Similar uncertainty surrounds the stunning human figures, large and small, said to have been excavated between 3300 and 2900 B.C., shortly before the first dynasty of ancient Egypt, if not even during its early stages.

An ivory statuette of a standing man with a mirthless expression on loan from the Ashmolean Museum at the University of Oxford in England and a wooden head from the Boston Museum of Fine Arts that once formed part of a life-size statue reveal an attention to human feelings that one rarely associates with ancient Egypt. The mood of distressed resignation that emanates from the wooden mask is unforgettable.

Early sculptors were capable of catching the most subtle psychological nuances. A limestone statue of a woman from the Musées Royaux d’Art et d’Histoire in Brussels stands with her left arm pressed across the chest in a gesture that conveys respectful salute to this day throughout the Middle East. She looks ahead with staring eyes wide open and one eyebrow raised ever so slightly, as if stunned in awe. Executed some time in the 27th century B.C., the sculpture ranks among the earliest masterpieces of psychological portraiture in the world.

The biggest surprise is the discovery of a three-dimensional portrait with highly individualized features. The man’s head is carved with such careful observation and such sensitivity in the observation of the subject’s mood that it might almost pass for a Western sculpture of the 19th century.

The portrait appears, of all places, in the pivot for a temple door post that is designed as a captive lying on its belly. The body, with its legs bound and bent over the back, is highly stylized in contrast to the face. Flat and level with the top of the head, the captive’s body allowed the door to rotate over it as the post swiveled in a cavity on the man’s back. Thus did the early sculptor convey the triumph of Egypt over its crushed foes. The slightly angular eyebrows, the slit eyes and the lips pressed into a bitter spout strongly suggest careful observation from life.

The gray stone statue of a watchful jackal, its head raised, alerted to some presence in the offing, is on loan from the Phoebe A. Hearst Museum of Anthropology, attached to the University of California, Berkeley. The sculpture is believed to have been carved between 3300 and 3100 B.C. The rigidity of the legs and the summary treatment of the paws certainly point to an art in its early stages. Yet, the tension of the animal, aware of an approaching prey or perhaps sensing some threat, is conveyed with astonishing deftness. The jackal’s jaws are shut tight, the ears pointed at angle. The sophistication of the observation is remarkable.

Throughout the show, animal sculpture reserves many of the greatest surprises. In particular, it suggests the juxtaposition of utterly different cultures at the outset of Egyptian history, even if we can only speculate about the ethnic roots of the artists.

In the earliest forms of artistic expression, animals overwhelmingly prevail.

A pouring vessel in the shape of a boat fashioned from red clay around 3700 B.C. ranks among the gems of the Boston Museum of Fine Arts. The tip of the prow is crowned with a duck head. The ease with which the bird’s head, stylized into a featureless silhouette, joins up with the sides of the deep hull suggests a long practice — about which nothing is known.

The fluidity of the bird-shaped prow stands in striking contrast to the angular animal figures summarily painted on vessels likewise considered to date from about 3700 B.C. While all are stylized, the handling of the duck-shaped prowhead and of the painted animals differs so much that they are unlikely to belong to the same culture.

An even greater abyss separates all these vessels from the gray stone palettes carved in low relief with animal scenes between 3300 and 3100 B.C. The precise meaning of these flat objects escapes us, but they were clearly of great importance in the ancient Egyptian cult. One of these, which is now in the Ashmolean Museum and is illustrated in the exhibition book — but sadly not in the show — was retrieved from a deposit in the early temple precinct of Hierakonpolis.

On “The Hunter’s Palette” from the British Museum, the scenes display greater skill than on the Ashmolean Museum palette. There obviously were different workshops, possibly from different schools. Some displayed greater mastery than others. Whether this betrays the provincialism of some centers or is due to the succession of different phases cannot be determined.

What is sure is that an expressionist tendency was a constant. It comes out in a palette carved with four dogs on loan from the Louvre. Altogether, the considerable differences in style imply that the art was cultivated over a sufficiently long period to have multiple ramifications. The two giraffes symmetrically standing on either side of a palm tree appear to deal with the ancient Middle Eastern theme of the Tree of Life, known in late fourth millennium B.C. Sumer, in the south of present-day Iraq. Like “The Hunter’s Palette” in the British Museum, this points to links with the Ancient Near East.

Such was evidently not the case with the earthenware jars of the Naqada I period. The artist who painted crocodiles and snakes over wavy lines signifying the Nile waters on a jar from the Brooklyn Museum belonged to a world that had nothing in common with the gray palette sculptors.

How these different cultures merged and eventually gave rise to dynastic Egypt has yet to be found out.

Only new excavations yielding closely dated evidence in well documented contexts may one day shed light on the mysterious birth of ancient Egypt.