The tomb's entranceway is located on the south wall of the tomb. It was blocked off with bricks 1,000 years ago. Images of two servants can be seen flanking the entrance. Credit: Courtesy of Chinese Cultural Relics

A 1,000-year-old circular tomb, whose walls are decorated with colorful murals, has been discovered in Datong City, in northern China.

Because the tomb's entranceway is sealed off with bricks, archaeologists had to enter through a hole in the deteriorating arch-shaped roof.

The team, from the Datong Municipal Institute of Archaeology, found cremated human remains in an urn in the middle of the tomb. No texts were found in the tomb, but the archaeologists believe that the tomb likely belonged to a husband and wife. [See Photos of the Circular Tomb and Colorful Murals]

The murals on the walls show servants, cranes and numerous articles of clothing that hang on several stands, their colors still vibrant despite the passage of a millennia.

Colorful clothing abounds on the tomb's murals. One clothes stand, painted on a mural on the west wall, has "sky blue, beige, bluish-gray, yellowish-brown and pink clothes," wrote the archaeological team in a paper published recently in the journal Chinese Cultural Relics. "The garment to the far right has a green-diamond grid pattern, each diamond of which has a small red decorative flower in it," wrote the archaeologists, noting that another article of clothing has what appears to be a jade ring that "hangs at the waist."

Additionally, the mural shows that "in front of the clothes stand there is a long rectangular table, on which are placed four round plates, black on the outside and red inside, holding, respectively, a headdress, bracelets, hairpins and combs," the archaeologists wrote. 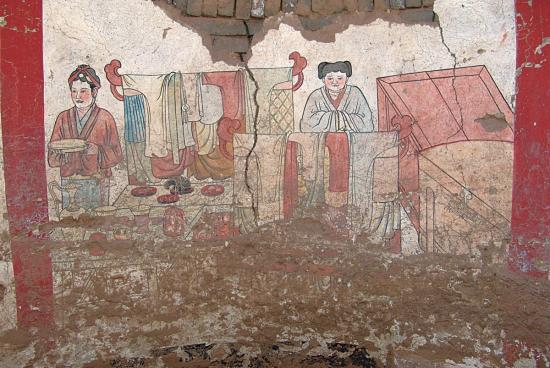 Murals on the west wall of the 1,000-year-old tomb. Numerous articles of clothing are depicted hanging on stands. Two servants can also be seen. On the far right, two chests, one red and the other beige, can also be seen. Credit: Courtesy of Chinese Cultural Relics

On the east wall of the tomb the mural shows another clothes stand. "On the stand hang beige, light green, bluish-gray, pink and brown clothes," the archaeologists wrote. "On one of the garments hangs a ring-shaped pei pendant accompanied by a string of black beads." Pei is a word that can mean "matching" or "accompanying" in English.

The team believes that the tomb likely dates to the Liao Dynasty (A.D. 907–1125). Historical records indicate that this dynasty, controlled by the Khitan, flourished in northern China, Mongolia and parts of Russia.

At that time, people in northern China were sometimes buried in tombs decorated with murals. In 2014, Live Science reportedon the discovery of another tomb containing murals, which was found decorated with images of stars as well as numerous animals, including a crane, deer, yellow turtle and even a cat playingwith a silk ball. That tomb was also excavated by a team from the Datong Municipal Institute of Archaeology.

Archaeologists believe that both mural-decorated tombs will help shed light on  those who lived during the Liao Dynasty.

The tomb with the murals showing colorful clothing was excavated by the Datong Municipal Institute of Archaeology team in 2007. The team published a report on the tomb in 2015, in Chinese, in the journal Wenwu. That report was translated into English for publication in Chinese Cultural Relics.