Current research on Large Cutting Tools (LCTs) in East Asia, mainly China and South Korea, has provided some new interpretations for the “Acheulean” in this region. Interpretations of the origins of LCT industries in Asia differ according to the conceptual framework of researchers and their weighting of specific assemblage features. The LCT materials from the Danjiangkou Reservoir Region recovered in new Palaeolithic field investigations from 2004 provide a rare chance to test Norton et al.’s observations and conclusion, and meanwhile, to decode the probable human behaviours in the Early Palaeolithic of East Asia. 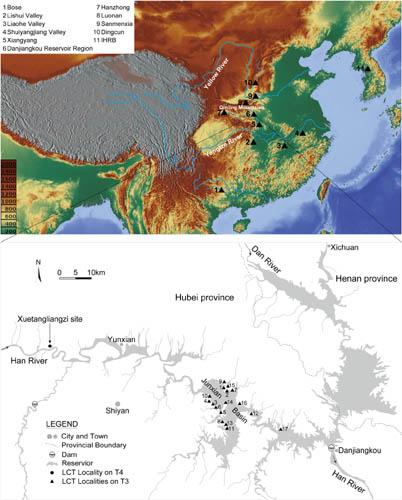 Fig.1 the Danjiangkou Reservoir Region  in central China and the distribution of sites along the third terrace of Han River in Junxian Basin. (Image by LI Chaorong)

Researchers from the Institute of Vertebrate Paleontology and Paleoanthropology of Chinese Academy of Sciences (IVPP), and University of the Witwatersrand in South Africa, revealed the typological, technological and morphological characteristics of the LCTs and to discuss their cultural affinities and the implications for the understanding of the “Acheulean” in East Asia. In a paper published in Quaternary International (347), they found that the techno-economic behaviours present in the LCTs of Danjiangkou Reservoir Region (DRR) would in fact support the existence of the true Acheulean techno-complex in East Asia, which explicitly shows the diversity and complexity of the Early Palaeolithic in this vast region. Moreover, the variability of the Acheulean techno-complex in East Asia is evident in the variable percentages, morphology and technology of LCTs, which could be explained as the effect of interconnected factors, such as raw material quality, landscape use strategies and population size.

Handaxe-bearing sites in China are currently known to occur in a number of alluvial basins, the best known being Dingcun, Bose and Luonan. Researchers documented the Danjiangkou Reservoir Region (DRR) as another major area for large cutting tools (LCTs), located in central China on the southeastern edge of the Qinling Mountains. Large cutting tools are preserved in three terraces of the Han and Dan Rivers in Hubei and Henan Provinces, with dates from ca. 0.8 Ma (millions of years ago) (Terrace 4) to the first half of the Middle Pleistocene (Terrace 3), and possibly to the Late Pleistocene (Terrace 2). Regional environments during the Middle Pleistocene were relatively warm, humid and stable. Despite the poor quality of raw materials (predominantly quartz phyllite and trachyte for the LCTs), good examples of both handaxes and cleavers are present, plus two types of picks. The LCT technology is compared and contrasted with other Asian industries and with the Acheulean. Overall the DRR LCTs show both technological and morphological similarities with Acheulean LCTs, with some differences that are mainly attributed to raw material properties, subsistence ecology, and ‘cultural drift.’

"The LCT materials from the Danjiangkou Reservoir Region provide us with a rare chance to test Norton et al.’s observations and conclusion, and meanwhile, to decode the probable human behaviours in the Early Palaeolithic of East Asia", said lead authorDr. LI Hao of the IVPP.

"However, because of the relatively limited materials available, we suggest that it is still premature to decide on the emergence of LCTs in East Asia. The indepth studies in this and the further investigations in other potential areas will shed light on our understanding of the LCT sites in East Asia", said study coauthor professor LI Chaorong of the IVPP. 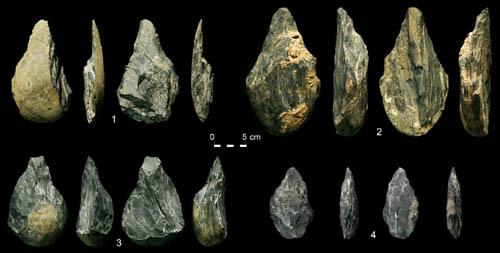 "The DRR LCTs expand the range of morphological variability of the East Asian material and highlight the need for greater reliance on technological analysis and raw material evaluation for best comparison of Chinese assemblages with the Acheulean tradition", said study coauthor Professor Kathleen Kuman of University of the Witwatersrand.