Danjiangkou reservoir is located in the northwest of Hubei province and southwest of Henan province at the headwaters area of the Middle Route of the South-to-North Water Transfer Project. In October, 2004, Scientists from the Institute of Vertebrate Paleontology and Paleoanthropology (IVPP), Chinese Academy of Sciences, conducted a survey around the margin of the reservoir that will later be submerged upon completing a new section of the dam, and found 367 lithic artifacts with handaxes and picks from 43 open-air sites, distributed upon different terraces along the Hanshui River and its tributary Danjiang River. The finding of handaxes and picks offers new materials to discuss the diffusion and cultural communication of early hominids, researchers reported in the latest issue of Acta Anthropologica Sinica 2012 (2).

Early hominids living at the Hanshui River and Danjiang tributary, near the Danjiangkou reservoir, selected cobbles as raw material from nearby gravel levels of a river bank to make stone artifacts. The artifacts include cores, flakes, chopper-chopping tools, scrapers, spheroids, picks and handaxes. The predominant raw materials are quartz and siliceous limestone, and secondarily, quartzite, sandstone and quartz sandstone. Quartz is the most common material amongst cores and flakes, while the heavy-duty tools, like picks and handaxes, were mostly made of siliceous limestone. This shows these early hominids had distinct criteria for selecting raw materials.

Chopper-chopping tools were made mainly from cobbles, among them 56 were unifacially worked, accounting for 64.37%; while the remaining 31 were bifacially worked. Scrapers were mainly made from medium and large flake, meanwhile, there were some small-sized scrapers made from quartz flakes, which are similar to the light-duty tools in northern China.

Picks were all unifacially worked and had a relatively low intensity of reduction, with retouch mainly focused on the distal end which preserved a high proportion of cortex. Handaxes have symmetrical features, with a cutting edge typically spanning more than half of the length of the body, but some specimens were fully worked. Considering that siliceous limestone is a poor-quality raw material with a very platy structure and it is difficult to control the fracturing properties, some variation in degrees of symmetry was commonly observed.

The raw material has a certain influence upon the form of handaxes discovered in Danjiangkou reservoir area, but the finding indicates that early hominids were already capable of planning ahead, because an ‘operative scheme’ or “planned set of actions” was necessary for producing the handaxes. 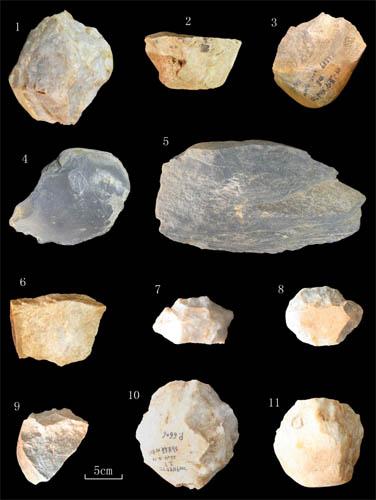 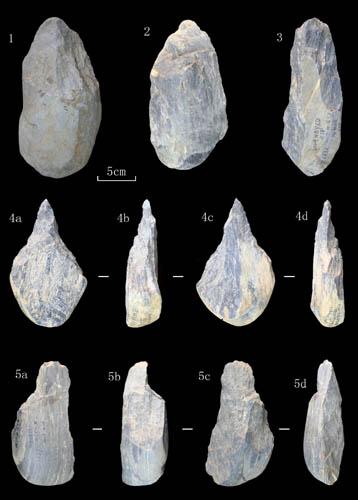 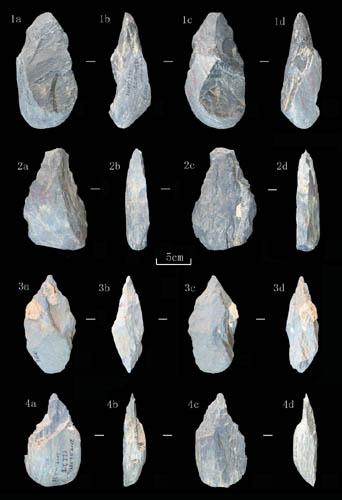