Analyses of Stone Age settlements reveal that the hunters were healthy and would gladly eat anything they could get their hands on, including carbohydrates – contrary to the modern definition of the Paleolithic, or Stone Age diet. 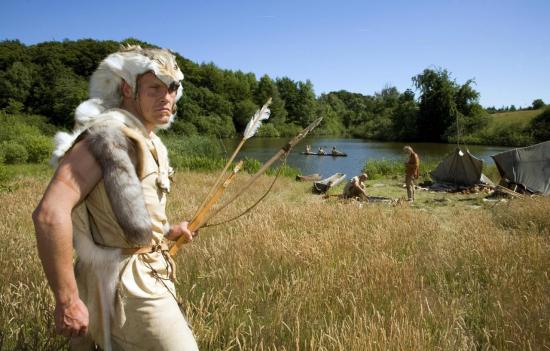 The prehistoric hunter-gatherer menu consisted of lots of proteins, less fat and fewer, though some, carbohydrates  - Photo: Sagnlandet Lejre

Archaeologists normally divide the Stone Age into three main periods -- the Paleolithic, the Mesolithic and the Neolithic, meaning 'Oldest Stone Age', 'Middle Stone Age' and 'New Stone Age', respectively.  In the Paleolithic and the Mesolithic periods, people are hunter-gatherers; in the Neolithic period, they start cultivating and become farmers. The Palaeolithic is the period up to and including the last Ice Age (approximately 2.4 million BC - 9,300 BC).  The Mesolithic spans from the end of the last Ice Age to the introduction of agriculture, which in Denmark was around 3,900 BC. 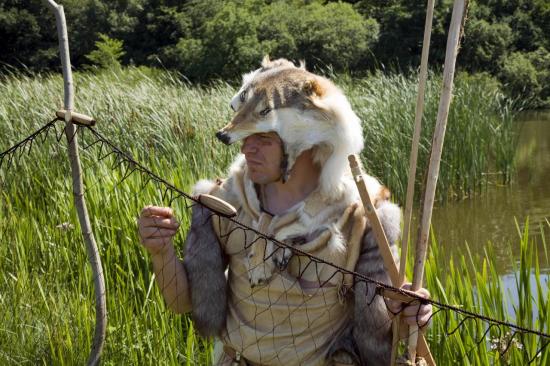 In the Danish Mesolithic period, people ate a lot of fish and mussels. (Photo: Sagnlandet Lejre)

The Stone Age hunter’s food contained large amounts of protein from fish, lean mean, herbs and coarse vegetables and has formed the basis of one of today’s hottest health trends: the paleo diet.  The modern version of the Stone Age diet excludes foods rich in carbohydrates. This exclusion of carbs is based on the idea that Stone Age hunters didn’t have access to bread, rice or pasta.  But is it true that Stone Age hunters and gatherers didn’t eat any carbohydrates at all?  Sabine Karg, an external lecturer at Copenhagen University’s Saxo Institute, specialises in archaeobotany. She says that Stone Age hunters, unlike many followers of the modern Stone Age diet, joyfully munched away at carbs when the opportunity presented itself.  “Carbohydrates have been part of their diet. In flooded settlements from the Palaeolithic and Mesolithic periods, traces of roots and seeds from various aquatic plants and wild grasses have been found.”

Stone Age hunters were not picky

The modern version of the paleo diet forsakes everything that’s reminiscent of bread, rice, pasta, legumes and milk.  But according to Karg, the Stone Age hunters were nowhere near that fastidious about their food.  Easily digestible food with high energy content is a welcome feature if you have to make the effort of finding the next meal yourself, and traces of foods containing carbohydrates have also been found in the old settlements.  “What archaeologists find in their excavations is dependent on both the preservation conditions and how the people had prepared their food,” says Karg. “For us, the conditions are particularly good in flooded settlements where organic material is well preserved, or in burn layers or fireplaces where we can find charred plant residues,” she says, giving an example: “We have found seeds of wild grasses, aquatic plants and root vegetables, all of which have formed part of the hunters’ diet. Especially after an unsuccessful hunt, they had to go out and dig up roots.”

In the Mesolithic period, Danes ate loads of fish and mussels, supplemented with deer and wild boar from the woods, along with any edible plants they could find.  They collected baskets full of berries, fruits, nuts and roots. Wild apples, hazelnuts and raspberries are among the best-known plants that the archaeologists have found traces of at the old settlements.

The Stone Age menu was widely different depending on the region, climate and season. In Denmark, people lived by hunting and gathering for more than 9,000 years until they changed their ways and became farmers.  During the course of these 9,000 years, Denmark presented the hunters with terrains ranging from frozen landscapes similar to today’s Greenland to warm islands with temperatures like those in today’s Southern European holiday destinations.  The starch sources that the archaeologists have so far found include acorns and sea beet, the latter of which is the ancestor of both the beetroot and the sugar beet.  Compared to today, the Palaeolithic and Mesolithic diets included lots of proteins, less fat and fewer, though some, carbohydrates.

You are what you eat

A healthy diet was as important to Stone Age hunters as it to modern man. But since we can’t just send a Stone Age hunter to hospital for a fitness test, if we are to find out about the health of the hunters, we need to make do with what’s available to us – bones and teeth. 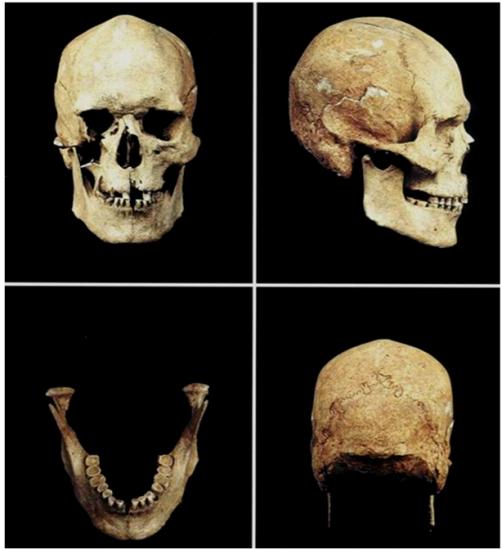 So ScienceNordic asked Pia Bennike, a biological anthropologist and lecturer at Copenhagen University, to bring out the boxes of Neolithic bones and tell us about their condition.  “The hunters’ dental health was excellent,” she says. “There is very little tooth loss and no caries. That’s understandable because they didn’t consume many sugary carbohydrates. The only sweet food available at the time was honey. The advantage with the starch sources they had, e.g. root vegetables, is that it’s coarse food, which actually helps clean the teeth.”

Bennike explains that the Stone Age hunters made good use of their healthy teeth:  “The skulls reveal that they had a strong chewing system and that their teeth were worn. The very heavy tooth wear shows that they have had a coarse diet, but also that perhaps they didn’t prepare their food as much as we do today.”  When it comes to tooth decay, she says, it’s not only about the contents of the food, but also about how it’s prepared:

Since wild boar and other wild animal species are lean, compared to their domesticated cousins, most of the fat the hunters ate came from raw materials such as marine mammals, fatty fish and nuts. Stone Age hunters were shorter than today’s Northerners and had stronger bones and muscles. This is partly because they used their bodies more than we do today.  “Caries emerges at the beginning of the Neolithic period and increases in the Iron Age and the Viking Age. This occurs in line with people starting to eat more carbohydrates, but also much more finely processed food.”

The hunters had strong bones 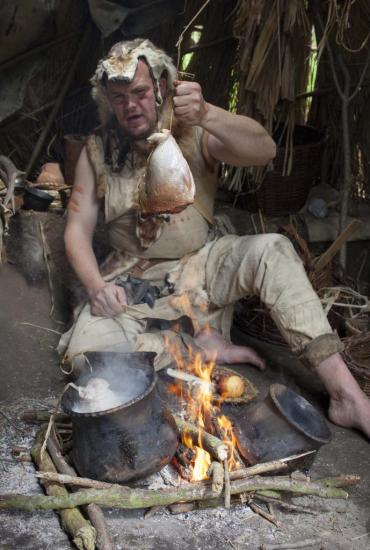 From the bones, we see that the general health condition of the Stone Age hunters wasn’t all that bad. Their life expectancy, however, was a lot shorter than it is for modern man.  “There are only few visible signs of diseases on the bones, but that could be put down to the low average age at the time. Those who survived into adulthood could expect an average lifespan of around 35-40 years,” says Bennike.  “Bone quality was generally better than today, but the question is whether that’s due to diet or exercise. Both factors have probably played a part, but the level of physical activity in particular makes a difference. It may also be an evolutionary feature because the further we go back in time, the stronger the bones.”

Stone Age people got their calcium from shellfish

Calcium is crucial to the quality and strength of our bones. Today we are advised to drink milk because of its high calcium content. But milk was not featured in the Stone Age diet, so the hunters must have found their calcium elsewhere.  “Calcium is found in many other foods, e.g. shellfish, so I think they got the calcium they needed,” says Bennike.  Stone Age hunters had strong bones and strong teeth. They lived active lives and ate a coarse diet, consisting of anything edible that they could get their hands on.