Engravings on a 10,000-year-old elk-antler prong adze emerged after it had been on exhibition for 50 years. Here, the researchers explain about the RTI technique that led them to the discovery of the concealed symbols. 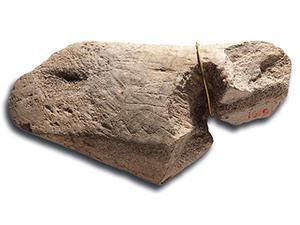 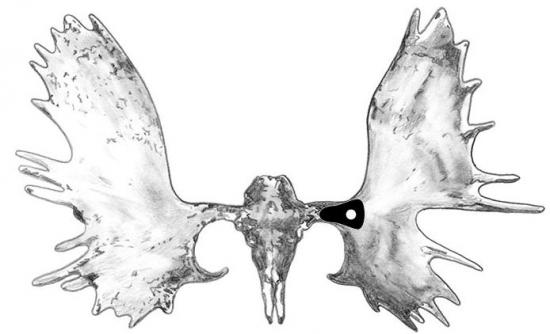 An elk skull from Kildeskov in Gentofte, Denmark, complete with antlers that measure a full 165 cm in diameter. The black dot marks the part from which this type of axe was made. (Drawing: Bjørn Kaiser Bachmann, based on Aaris-Sørensen 1998) 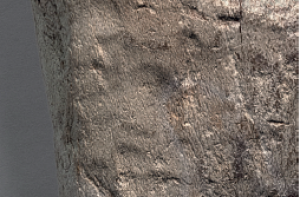 An adze is a tool used for smoothing or carving rough-cut wood in hand woodworking, for squaring up logs or hollowing out timber. Source: Wikpedia

When the late Glacial relaxed its grip on Denmark after more than 3,000 years, a new and milder period started around 9,500 BC – the Preboreal.

The Preboreal changed the wildlife and thus humans too. In his period, forests slowly gained a foothold, reindeer left the scene and were replaced by elk and aurochs.

Preboreal settlements represent the Early Maglemosian culture, but so far no settlements have been found where waste and tools of bone and prongs are preserved.

However, archaeologists have excavated a butchering site with elk bones and a few antler tools, but apart from these antler tools are only known as stray finds.

One of these is an elk-antler prong adze, which has been on exhibition at Økomuseum Samsø in Denmark since the 1960s. The almost 14-centimetre long adze is made from an elk’s large prong, which is taken from the broad branch of the antler that sticks out of the skull.

An inclined chipping of the prong has created an edge, which has several marks from use, while an oval shaft hole has been drilled into the flatter part of the prong from both sides. The adze is broken at the shaft hole, i.e. while it was being used.

The adze had hidden patterns

Many visitors at the museum have seen the adze in the exhibition case, including a number of professionals, quite a few of whom have even held it in their hands.

Yet it wasn’t until last year that we noticed that the adze is ornamented. This prompted us to take a closer look at the origin of the adze.

A document from the early 1900s mentions that the adze, along with four flint cores and several flint tools and flakes “most likely … originates from the well-known settlement of Holmegårds Mose, which was excavated by archaeologists at the National Museum of Denmark."

In 1922-23, archaeologists examined more than 1,600 square metres of a settlement from the Maglemose Culture at Holmegårds Mose.

The adze may have been found at this excavation, but these settlements are dated to slightly later than the elk axes. So it’s possible that this adze has been found at a peat-digging near the settlement or elsewhere in the bog, which – as we now know – also contains an older (Preboreal) settlement.

The fact that we haven’t noticed the patterns on the elk-antler prong adzeuntil now could be due to the lighting conditions where it has been exhibited. Due to a restructuring of the museum’s antiquities collection, the adze was moved, and suddenly a carved zig-zag band was revealed.

The angle and the strength of the lighting have a bearing on what is visible on the surface. If the light falls in one direction, certain parts of a pattern are highlighted, while others will be fainter or even invisible. Re-angle the light, and other parts of a pattern may emerge.

A new digital photography method called Reflectance Transformation Imaging (RTI) makes it possible to save and review images an object with all the lighting angles characteristic of a physical presence.

The new method enables us to create a computer-generated model, which generates an interactive re-lighting of an object’s surface. The lighting can then be adjusted on the screen.

When we adjusted the lighting on the elk-antler prong adze, small scale-shaped grooves became visible along one of its sides. These are marks from manufacture, probably created by cuts from a small flake axe.

Other decorations appeared in a new light, too. We saw several engraved lines, and during our RTI modelling, we noticed faint traces of a vertical line that had almost worn off. This line is likely to have connected the tips of the zig-zag band.

Our studies show that the decoration may originally have been a line that was connected with triangles. We only know such patterns from five other objects from the Maglemose Culture: a nodule of flint, an amber pendant, a metacarpal bone from an aurochs, a piece of an antler of a stag and an elk-antler prong pickaxe.

What’s even more unusual is the adze’s two vertical lines bordering diagonal line bundles with alternating orientation. This pattern has only been seen before on a bone knife from Sollerön in Sweden.

Whereas the decorations on the adze cannot be dated more accurately than to the Mesolithic Era, the type of the adze tells us a bit more. A few Scanian pieces have been dated to the Preboreal, and numerous elk-antler prong adzes, including one with part of the handle preserved, have been found in the contemporary English settlement of Star Carr.

The last time an axe like this was found was at Lundby Mose, where it was lying next to an elk skeleton.

On this basis, we estimate the elk-antler prong adze to be around 10,000 years old.

This is an unusual discovery because axes and adzes made from red deer and elk antlers were rarely decorated in the early Maglemose.

Source - This article is reproduced on this site by kind permission of Skalk, a Danish periodical with articles about Danish prehistoric and medieval archaeology, history and related topics.