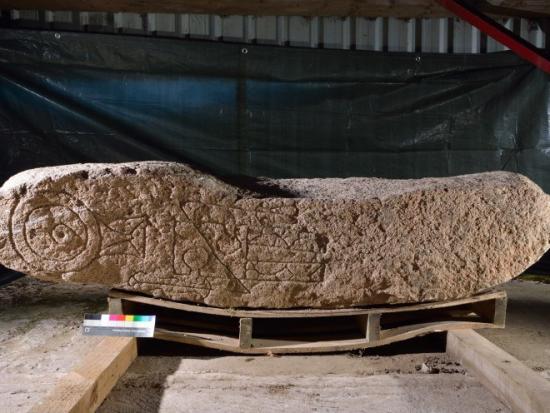 Archaeologists are examining a 5ft Pictish artifact described as the most interesting find of the decade in Moray.

The Dandaleith Stone, which weighs over a tonne and has decorations carved on two of its faces, was discovered in fields near Craigellachie.

The landowner who reported the discovery said that the farmer had “broken his plough on a rather large stone with some sort of carving on it”.

About 1.500 years ago, an eagle, a crescent symbol and a mirror-like symbol on another were etched into the pink granite boulder.

“The exact significance for the Picts of these stones and their symbols are the subject of much debate.

“It’s been suggested that they may have been used as burial markers, but there’s little evidence so far to support that.

“My own personal theory is they were boundary markers, saying ‘this is us, this is where we live’.

“Members of the public regularly contact us about artifacts but the Dandaleith Stone is something truly unexpected.

“I would like to thank the ploughman and landowner for reporting their find to us, and for their continued help and co-operation.

“To our knowledge, this is a truly unique find which has the potential to alter our understanding of the Picts.”

The stone, which is described as being in good condition, is currently the subject of restoration work and further research.

And it is hoped it will soon find a permanent home at Elgin Museum.

Excavation work is also planned in the fields where the stone was discovered.

The Picts lived in the region between the 3rd and 9th centuries, but the Dandaleith stone is thought to date from around 500AD.