The Unknown Benefits of Dental Plaque

In an episode of ‘Bones’ from a couple months ago called ‘The Hot Dog in the Competition’, the forensics team is able to recover valuable evidence from in between the teeth of the victim. By flossing her teeth, they were able to find the remains of the food she had eaten prior to death, as well as flesh of an individual who was potentially her killer.  This type of recovery doesn’t occur in skeletal remains from the past. However, due to the dental care habits throughout history, dental plaque can mineralize and be preserved. Blatt et al. (2011) use the food inclusions found in human dental calculus in order to determine their diet as well as making an interesting discovery.

Like the residue of cooking materials, the dental calculus has often been overlooked as a source of evidence. Pieces of food and debris that enter the mouth adhere to dental plaque. Over time this becomes mineralized and is preserved in situ on the teeth. They can provide evidence about the diet of the individuals. Blatt et al. (2011) recovered cellulose fibers from the teeth of human skeletal remains found in Ohio at the Danbury site, dating 900 to 1100 CE. The fibers recovered are more commonly known as cotton.

The study looked at the remains of 8 individuals from a total sample of 152. The sample includes a range of ages from adolescent to old adult, and has 3 females and 5 males. Teeth were carefully cleaned to remove dirt and other debris from the teeth. Following this the dental calculus was carefully removed, broken down using HCl, and then examined under a scanning electron microscope. The cotton fibers were identified by their elongated cells. Based on the cells found, they argue that they are from immature plants and lack the torsion patterns associated with yarn. Four of the individuals from the sample were found to have these cotton fibers. All are adults, and only one is female. Two individuals were also taken, separate from the above sample, in order to determine the stable carbon and nitrogen isotope ratios. From the isotope data they found that the diet consisted primarily of maize and aquatic fauna. 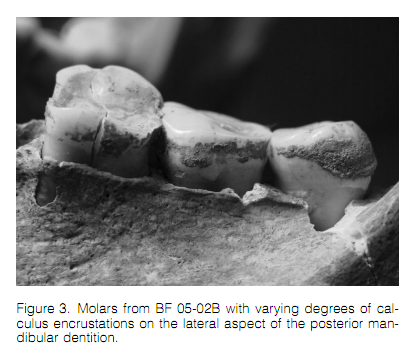 How the cotton fibers got into the teeth of these four individuals is unknown. They lack the normal wear and tear found in communities that use their teeth to aid in weaving and there are no artifacts to support the practice of spinning yarn. However, the latter practice is most probable. Prior to making yarn, it is necessary to fluff the cotton. One does this by holding one end between the teeth and pulling the other. Since they found a high percentage of marine fauna in their diet, it is possible the cotton was used for the construction of fishing lines.

What is most interesting about this find, is that cotton is not native to the area, and was not thought to be present in Ohio until after the Late Woodland period. The type of cotton found at the Danbury site is likely to have originated from Mesoamerica. In this region, cotton was domesticated around 300 BCE and 500 CE. Cotton was found in the United States in the Southwest regions around 1,500 years ago, and it slowly spread across the country. However, there has been no other pieces of evidence of it making its way to the Midwest by 1,000 years ago when the Danbury site was in use. The implication of the finding of cotton fibers between the teeth of the Danbury inhabitants is that the trade networks and interactions occurring in this period are much more far reaching and long distance than had previously been thought.

It is interesting that pieces of evidence, such as dental calculus, can be overlooked. We know that food particles and other debris get stuck in our teeth- from the episode of ‘Bones’ we know that it is something checked by forensics. However, you rarely read about the macro or microbotanicals recovered from skeletal remains. From doing isotope analyses we can tell the general diet of an individual, but it isn’t always reflective of what they ate in their final years. Since the build up of calculus was fairly weak, Blatt et al. (2011) argues that this is evidence consisting of the six months prior to death. Studies like these are important- they give all of us bioarchaeologists a great ‘duh’ moment. Why weren’t we looking at the dental calculus?!? My only wish from this paper is that they looked closer at the archaeological context of those with the cotton in their dentition. Perhaps some of the artifacts in there may have been telling about their profession. The close relation of fishing artifacts would have been extremely telling if the cotton was meant for fishing line.