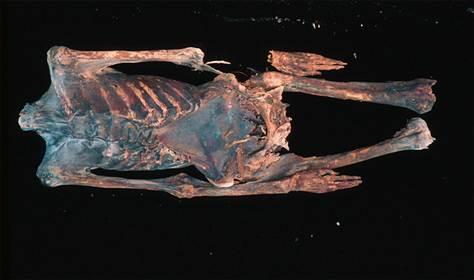 Dakhleh Oasis Project - This mummy was discovered in Dakhleh Oasis, a remote outpost in southwest Egypt. He lived around 1,800 years ago, at a time when the Romans occupied Egypt; he died when he was 20-25 years old. Although much of the mummy remains are lost, the area around the lungs, where particulates were found, is well preserved.

Ancient Egyptians may have been exposed to air pollution way back when, according to new evidence of particulates in the lungs of 15 mummies, including noblemen and priests.

Particulates, tiny microscopic particles that irritate the lungs, have been linked to a wide array of modern-day illnesses, including heart disease, lung ailments and cancer. The particulates are typically linked to post-industrial activities, such as fossil-fuel burning.

But after hearing of reports of such particulates being found in mummy tissue, Roger Montgomerie, a doctoral student at the KNH Centre for Biomedical Egyptology at the University of Manchester, decided to take a closer look at mummified lung tissue. His work represents the first attempt to identify and study particulates in multiple Egyptian mummies. 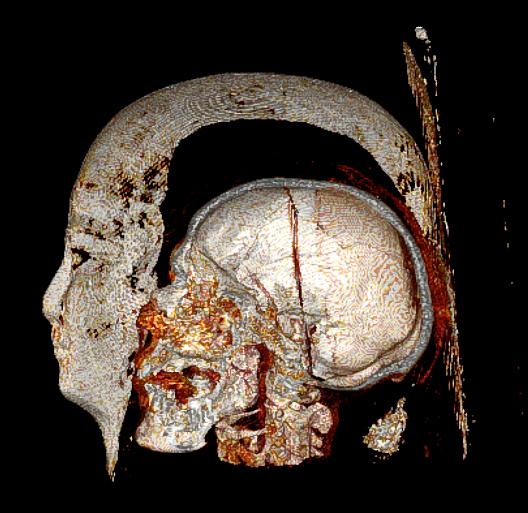 Credit: Dr. Michael MiyamotoThe ancient Egyptian mummy Djeher as imaged with a CT scanner. Djeher was found to have heart artery and other vascular disease. Djeher lived between 304 and 30 BC.

The 15 mummified lungs he's examined so far all showed particulates and the levels of them are not much below what he'd expect in modern-day lungs.

"I would say it would be less than modern day, but not much less," Montgomerie told LiveScience. This is "quite bizarre if you think about it, considering we have the mass burning of fossil fuels and an awful lot of pollution that has been going on since the industrial revolution."

In the world of Egyptology, where well-preserved lung tissue is rare, and permission to examine it is rarer still, 15 is a significant sample, Montgomerie said.

All walks of life
These mummies come from a broad cross section of Egyptian life. Some were ordinary workers who lived in a remote outpost called the Dakhleh Oasis, while others were of the upper class — nobles and priests or priestesses.

"Everyone seems to have a degree of it," Montgomerie said of the particulates, "it doesn't seem to be confined to one social group."

The finding suggests the ancient Egyptians may have suffered from a wide range of negative health effects.]

Lung disease has been detected before in Egyptian mummies. One notable case was documented in the 1970s by Eddie Tapp, also from the University of Manchester.

Tapp examined the lungs of a 3,800-year old-mummy named Nekht-ankh. Although this person lived to be nearly 60, his lungs were in bad shape and he may have had trouble breathing, Tapp found.

"The lung tissue appeared to be damaged and to contain a good deal of scarring," Tapp wrote in the book "The Manchester Mummy Project" (Manchester University Press, 1979). "Amongst the fibrous tissue were several aggregations of fine particles."

Ancient air pollution
The question now facing researchers is why were particulates so prevalent in Egyptian society?

While ancient Egypt was a preindustrial society, its people did engage in cooking, metal working and mining, all activities that can generate air pollution. In addition, the Egyptian climate, with its deserts and sandstorms, would have whipped up any grounded particulates into the air where they could easily be inhaled.

Now, Montgomerie has devised an experiment that he hopes will shed light on the origin of these tiny particles.

He is burning different sources of fuel used by the Egyptians and capturing the particulates they create. "What I can do is go back to the ancient soot, from the ancient lung tissue, and compare the two."

In addition, he is gathering sand from archaeological sites in Egypt and comparing them to sandy particulates found in the lungs. He said that sand from the desert is eroded and should be "nice and rounded" whereas sand from manufacturing or quarrying "should be fresh sand and should be sharp and angular."

He told LiveScience that it will be at least three months until he has results back from his experiment.

This research was presented at the 12th annual Current Research in Egyptology conference, held in March at Durham University in the United Kingdom.