A team of Iranian experts has recently commenced geomagnetic studies on the urban planning at the Achaemenid city of Dahaneh Gholaman in Sistan-Baluchestan Province.

The team also plans to prepare an archaeological map of the city, team director Kurosh Mohammadkhani, who is a graduate of the Sorbonne University, told the Persian service of IRNA on Sunday.

“Due to the fact that Dahaneh Gholaman is a single-layer archaeological site, the geomagnetic studies on this site are very important. This is the only Achaemenid site that contains information on the lifestyles of the ordinary people,” he said.

For the first time, the studied will produce information on the urban planning system during the Achaemenid period, he added.

“Persepolis, Pasargadae, and other Achaemenid sites in Susa have frequently been studied, but these sites are all royal palaces,” Mohammadkhani noted.

Located two kilometers from Qal’e-No village and about 44 kilometers from the city Zabol, Dahaneh Gholaman was identified by Italian archaeologists in 1960. They could not find any artifacts during several excavations done from 1962 to 1965 but were satisfied with the results of their architectural studies there. A group of major monuments and some individual buildings were discovered at the site, which covers an area of 120,000 square meters. 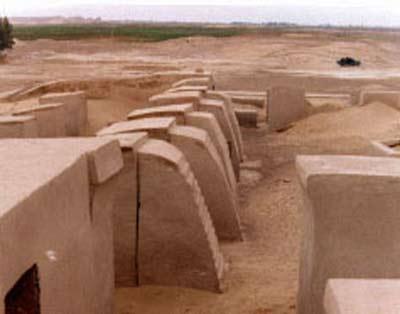 The director of another Iranian archaeological team, which has previously worked in the region and at the 5200-year-old Burnt City, Mansur Sajjadi, said in 2005 that studies on the precise architecture and great harmony in the design of Dahaneh Gholaman indicate that it was constructed using methods based on urban planning.

“No architectural plan for a city in any ancient site in the world, and particularly prehistoric sites, has ever been observed until the Achaemenid era. In fact, the sites had been small villages which had grown into cities due to an increase of population, but the stratigraphy studies and research carried out by Iranian and Italian archaeologists indicate that this city had been constructed based on preplanning with precise and unique architecture,” he explained.

“The inhabitants and engineers of the time used all their tools and facilities in the construction of the city, and the large size of buildings indicates the city had been an industrial area,” Sajjadi said, adding that the city may be the only Achaemenid site in which private residences are adjacent to public and governmental buildings.

“There are no private houses beside the royal buildings in Persepolis which is indicative of Achaemenid architecture,” he noted.

Studies in the 1960s indicated that the residents abandoned the city about 200 years after it was founded and may have relocated to present-day Pakistan. However, the reason for the planned abandonment of Dahaneh Gholaman is still a mystery.

Archaeologists have surmised that the city was abandoned due to an important political decision, a strong sandstorm, or because the river which supplied water for the inhabitants ran dry.

According to Sajjadi, the best hypothesis to explain the sudden migration is that the river ran dry.

“It is likely that one of the branches of the Helmand River, which supplied water to the city, ran dry for some reason, and thus the people had to leave the city, but this is not certain,” he said.