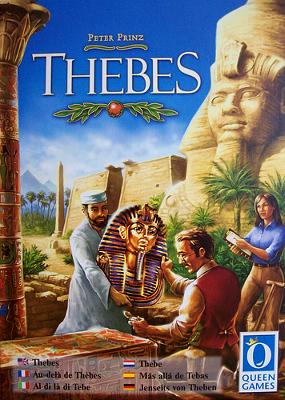 Thebes is a multi-award-winning 2007 German board game by Peter Prinz. I just bought it on a tip from my buddy Oscar, who found a good offer on-line and thought of me because of the game's theme. It's about archaeological expeditions in the early 1900s. The box is big, the production values are lavish, and I really look forward to learning it. But before I can say anything about its qualities as a game, I have to share an opening paragraph from the rule book with you (and I translate from the Swedish version).

The players travel as archaeologists through Europe to gather needful knowledge for their fieldwork expeditions. With the aid of assistants, the players must get hold of equipment and services for the expedition. Thus equipped, the players travel to Egypt, Crete or Mesopotamia to dig for treasure, which will garner them fame and improve their reputation in the form of Victory Points. Players who can arrange exhibitions and attend conferences will improve their reputation (Victory Points). But all of this costs time, and time of course a scarce resource. The one who plans his excavations and exhibitions best will earn the most Victory Points and win the game.

This is awesome! Peter Prinz is quietly making fun of my whole profession here. Because in Thebes, archaeology's goal is not to find out about the past. Prinz knows something about the sociology of science. The goal here is to become as famous as possible by finding "treasures" among the ruins of past civilisations and exhibiting them in the capitals of Europe! For every excavation you blindly grab a number of cardboard discs out of a bag, and about half of them are "Worthless Junk" that give no fame points! Gathered knowledge about an ancient culture does help you a little in winning the game, but only if you're acknowledged as the top expert in the field -- fame again.

Now, let's see, is there any archaeologist you can think of who practices relentless self-promotion? Hmm...