Curse of the Pharaoh's DNA Part-1

Some researchers claim to have analysed DNA from Egyptian mummies. Others say that's impossible. Could new sequencing methods bridge the divide?

Cameras roll as ancient-DNA experts Carsten Pusch and Albert Zink scrutinize a row of coloured peaks on their computer screen. There is a dramatic pause. "My god!" whispers Pusch, the words muffled by his surgical mask. Then the two hug and shake hands, accompanied by the laughter and applause of their Egyptian colleagues. They have every right to be pleased with themselves. After months of painstaking work, they have finally completed their analysis of 3,300-year-old DNA from the mummy of King Tutankhamun.

Featured in the Discovery Channel documentary King Tut Unwrapped last year and published in the Journal of the American Medical Association (JAMA)1, their analysis — of Tutankhamun and ten of his relatives — was the latest in a string of studies reporting the analysis of DNA from ancient Egyptian mummies. Apparently revealing the mummies' family relationships as well as their afflictions, such as tuberculosis and malaria, the work seems to be providing unprecedented insight into the lives and health of ancient Egyptians and is ushering in a new era of 'molecular Egyptology'. Except that half of the researchers in the field challenge every word of it.

Enter the world of ancient Egyptian DNA and you are asked to choose between two alternate realities: one in which DNA analysis is routine, and the other in which it is impossible. "The ancient-DNA field is split absolutely in half," says Tom Gilbert, who heads two research groups at the Center for GeoGenetics in Copenhagen, one of the world's foremost ancient-DNA labs.

“I don't understand people's harshness. This is pioneering work.”

Unable to resolve their differences, the two sides publish in different journals, attend different conferences and refer to each other as 'believers' and 'sceptics' — when, that is, they're not simply ignoring each other. The Tutankhamun study reignited long-standing tensions between the two camps, with sceptics claiming that in this study, as in most others, the results can be explained by contamination. Next-generation sequencing techniques, however, may soon be able to resolve the split once and for all by making it easier to sequence ancient, degraded DNA. But for now, Zink says, "It's like a religious thing. If our papers are reviewed by one of the other groups, you get revisions like 'I don't believe it's possible'. It's hard to argue with that."

The disagreement stems from the dawn of ancient-DNA research. In the 1980s, a young PhD student called Svante Pääbo worked behind his supervisor's back at the University of Uppsala in Sweden to claim he had done what no one else had thought was possible: clone nuclear DNA from a 2,400-year-old Egyptian mummy2. Soon researchers realized that they could use a new technique called polymerase chain reaction (PCR) to amplify tiny amounts of DNA from ancient samples. There was a burst of excitement as DNA was reported from a range of ancient sources, including insects preserved in amber and even an 80 million-year-old dinosaur3. 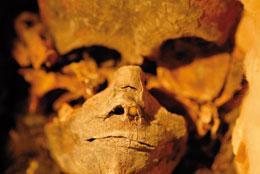 Mummies found in King Tutankhamun's tomb are at the centre of a dispute over DNA analysis.B. IVERSON & B. QUILLICCI

Then came the fall. It turned out that PCR, susceptible to contamination at the best of times, is particularly risky when working with tiny amounts of old, broken-up DNA. Just a trace of modern DNA — say from an archaeologist who had handled a sample — could scupper a result. The 'dinosaur' DNA belonged to a modern human, as did Pääbo's pioneering clone. Once researchers began to adopt rigorous precautions4, including replicating results in independent labs, attempts to retrieve DNA from Egyptian mummies met with little success5.

That's no surprise, say sceptics. DNA breaks up over time, at a rate that increases with temperature. After thousands of years in Egypt's hot climate, they say, mummies are extremely unlikely to contain DNA fragments large enough to be amplified by PCR. "Preservation in most Egyptian mummies is clearly bad," says Pääbo, now at the Max Planck Institute for Evolutionary Anthroplogy in Leipzig and a leader in the field. Ancient-DNA researcher Franco Rollo of the University of Camerino in Italy went so far as to test how long mummy DNA might survive. He checked a series of papyrus fragments of various ages, preserved in the similar conditions to the mummies. He estimated that DNA fragments large enough to be identified by PCR — around 90 base pairs long — would have vanished after only around 600 years6.

Yet all the while, rival researchers have published a steady stream of papers on DNA extracted from Egyptian mummies up to 5,000 years old. Zink and his colleagues have tested hundreds of mummies, and claim to have detected DNA from a range of bacteria, including Mycobacterium tuberculosis, Corynebacterium diphtheriae and Escherichia coli, as well as the parasites responsible for malaria and leishmaniasis.

In a high-profile study last year, a team led by microbiologist Helen Donoghue at University College London reported finding DNA from M. tuberculosis in Dr Granville's mummy7 — named after physician Augustus Granville, the first person to autopsy a mummy, in 1825.

In the case of tuberculosis (TB) at least, Donoghue vehemently disagrees with the idea that DNA can't survive in Egyptian mummies. Mycobacteria such as M. tuberculosis have cell walls that are rich in lipids, which degrade slowly and protect the DNA, she argues. Donoghue claims that in many cases she has confirmed the presence of the bacterium by detecting these lipids directly. She says the extreme anti-contamination measures demanded by the big ancient-DNA labs are not as vital for ancient microbial DNA as they are for human DNA. After all, she says, modern diagnostic labs routinely detect TB using PCR — which suggests that the test is not as susceptible to contamination as the sceptics fear. In Donoghue's view, "some of the precautions they talk about are totally over the top compared to every diagnostic lab in the country".

The sceptics are unmoved. Without highly stringent controls in place, it's impossible to show that any microbial sequences are from ancient DNA and not from related modern microbes, says Gilbert. "How do you know you've got TB and not some other bacterium with a similar DNA sequence?" He and other critics believe that this entire body of research is based on wishful thinking.

The two groups have now grown tired of arguing. "It's largely dealt with by ignoring each other," says Ian Barnes, a molecular palaeontologist at Royal Holloway, University of London, who works on DNA from ancient animals, including mammoths. "There's enough dead stuff around, you're not obliged to get into anyone else's area."

After the JAMA study on Tutankhamun and his family, however, the arguments resumed in force. Studies of human DNA from Egyptian mummies are the most controversial of all. One reason is the high profile of the claims. Another is that contamination from modern human DNA is excruciatingly difficult to detect, because its genetic make-up is almost identical to that of a human mummy's. On top of that, restricted access to samples makes it hard to check any claims in an independent lab. After more than a century in which valuable artefacts flooded out of the country to museums and private collections all over the world, the Egyptian authorities imposed a ban on removing archaeological samples from Egypt. Most non-Egyptian researchers wanting to study mummies are limited to museum exhibits elsewhere.

Archaeologist Zahi Hawass with King Tut's grandmother and a lot of press.A. WAGUIH/REUTERS

The Tutankhamun project was carried out by an Egyptian team recruited by archaeologist Zahi Hawass, Egypt's top official in charge of antiquities. It was the first ancient-DNA study on royal mummies, and the country lacked the necessary expertise. So Hawass asked Zink, a prominent researcher at the EURAC Institute for Mummies and the Iceman in Bolzano, Italy, and Pusch, of the University of Tübingen, Germany, to act as consultants. The pair designed and oversaw the study, including the building of two dedicated labs in Cairo. The labs were partly paid for by the Discovery Channel, which filmed the project.

The researchers deny that the television involvement put them under excessive pressure to produce dramatic results. But working for the cameras did make a challenging project even tougher, says Pusch. "Each time they came in to film, we had to close the lab for a week to clean." Eventually the TV crew was banished and the lab scenes reconstructed.

In the end, the project seemed to be a wild success, and its findings drew wide press attention. The researchers claimed to have detected DNA from the malaria parasite Plasmodium falciparum in several of the mummies, including Tutankhamun, suggesting that the infection had contributed to their deaths. They also said they had retrieved fragments of human DNA from every mummy tested and used the data to construct a five-generation family tree, from Tutankhamun's great-grandparents to the two tiny bodies found in his tomb, identified as his stillborn children.

The whole episode has only raised eyebrows in the other half of the community. "I'm very sceptical," says Eske Willerslev, director of Copenhagen's Center for GeoGenetics, who co-authored a letter to JAMA disputing the results8. His major concern, shared by others, was the method of DNA analysis used. Rather than extracting and sequencing DNA, the team used a technique called genetic fingerprinting, which involves measuring the size of the DNA products that have been amplified by PCR. It is rarely used in ancient-DNA studies, say critics, because without sequence data it is especially difficult to rule out contamination. And on a well-handled mummy such as Tutankhamun, say sceptics, contamination could be rife.