3,000-year-old bog body is likely to be sacrificed Irish king 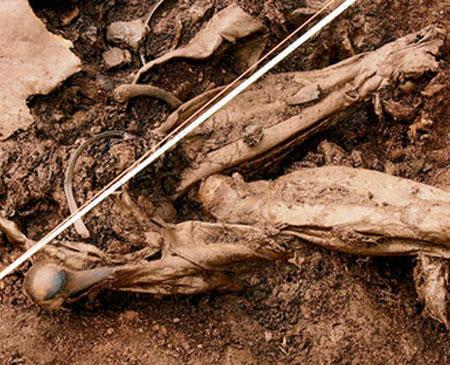 Experts at the National Museum of Ireland believe the body accidentally discovered in a bog in County Laois could be that of a sacrificed Iron Age Irish king. The body displays various cuts that show the man was killed in a ritual killing associated with kingship.

An expert in the field, Ned Kelly, spoke to the Journal about the new theories. He explained “Irish kings in the ancient period were replaced after a number of years. The old king would be sacrificed and a new king chosen. It ties in with their religious beliefs surrounding the solar deity (male) and the deity of the land (female). The king ties in with the solar cycle – the waxing and waning of the sun.

The idea was that the king was married to the sovereignty, or the land. The goddess would become old and withered and she would need a new young consort to return her to youth and vigor and beauty. So the old king would be killed and a new one take his place. They wouldn’t have been that old, either.”

The area where the body was accidentally found by turf cutters is of particular interest to historians and archaeologists as it is on the border of two ancient Irish kingdoms.

Kelly said “All of the other bog bodies were found on significant boundaries. The idea is that because the goddess is the land, by inserting bodies and other items relating to their inauguration as king along the boundaries, it gives form to the goddess.”

A more detailed examination of the body will reveal further facts about the man’s lifestyle and status. His last meal may even be preserved in his stomach.

They will be pay particular attention to the bog body’s nipples. Whether or not his nipples have been cut could indicate whether he was a king.

Kelly explained “The kissing or suckling of a king’s nipples was a gesture of submission,” Kelly said. “So by cutting the nipples, the king was being decommissioned.”

Initially the body was examined on site. They experts had believed that it was the body of a young woman and that her torso had been separated from her lower limbs. They had thought that her torso decomposed because it was wrapped in leather.

However once the body was removed from the bog and re-examined in cold storage at the  museum they realized that the body was simply in a very contorted position. What they had thought was a leather bag was in fact the man’s torso.