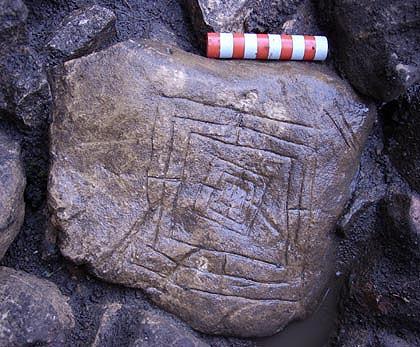 When archaeologists working through the Victorian spoil heaps at Creswell Crags in 2006 uncovered a stone with a familiar carved geometric pattern, it opened yet another aspect of the ever-developing story of the important prehistoric caves.

What the experts from Sheffield University had unearthed was in fact a medieval incarnation of the strategy board game Nine Men’s Morris, which had been popular since Roman times.

Its discovery provided a glimpse into medieval activity at the Crags, which is the most important cluster of caves inhabited during the last Ice Age and the scene of paleolithic finds ranging from stone tools to cave paintings. But it also opened up a medieval mystery; how did the game get there and who had made it?

Now a new exhibition in the Special Exhibitions Gallery at the Ice Age site explores who might have owned and played this long forgotten strategy game.

Other medieval finds, including coins and bottles, were discovered alongside the stone carved game suggesting the site may have been used as an illegal drinking and gambling den by the monks linked to nearby Welbeck Abbey.

As well as pondering the behaviour of their medieval forebearers, visitors have the chance to have a go on an interactive version of Nine Men’s Morris and, of course, see the real medieval board itself.