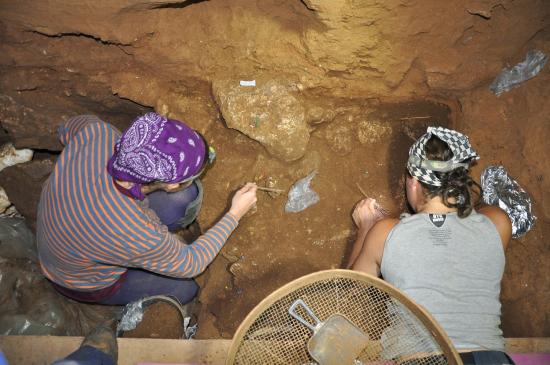 Researchers in the Cova del Gegant, in Sitges

An interdisciplinary scientific team, coordinated by researchers in the University of Barcelona (UB), has discovered a mandible and a humerus of a five-year old Neanderthal (Homo neanderthalensis) in the Cova del Gegant, in Sitges (Barcelona). Fossil analysis, described on an article published in the Journal of Human Evolution, confirms that they are the first Neanderthal human remains found in Catalonia on a present excavation. Remains belong to an individual who lived 55,000 years ago.

Fossils were presented today on a press conference that took place in the Aula Magna of the Historic Building of the UB. Archaeologists Joan Daura, Montserrat Sanz and Josep Maria Fullola, professors in the Department of Prehistory, Ancient History and Archaeology of the UB and members of the research group Seminar on Prehistoric Studies and Research (SERP), participated on the conference. Researchers João Zilhão, in the UB; Juan Luis Arsuaga, in the Complutense University of Madrid, and experts in the University of Lisbon (Portugal), the University of Burgos (Spain), Binghamton University (USA), Bristol University (United Kingdom) and the American Museum of Natural History (USA) also participated in the study.

These fossils are the clearest evidence of species’ presence in Catalonia. So far, all Neanderthal remains found in Catalonia have resulted from ancient excavations or accidental findings. In this case, remains were found in a well-dated area of the Cova del Gegant. The levels of the cave are known well, so it was possible to date findings. Moreover, researchers also found stone tools and animal remains associated to the age in which Neanderthals lived. “Remains constitute one of the scarce existing associations among bone, stone, Mousterian and animal remains of the same age in this area of the Iberian Peninsula”, says Joan Daura, Juan de la Cierva UB researcher.

Remains of a single individual 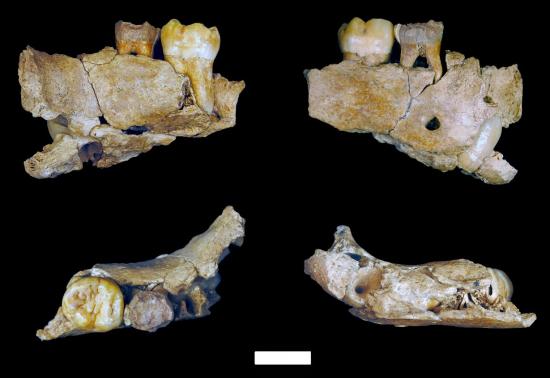 The jawbone and a humerus are 55,000 years old and belong to  a juvenile individual 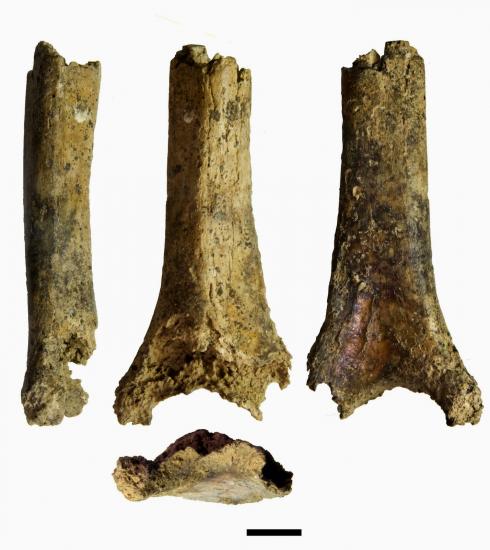 The mandible belongs to a juvenile estimated to be between 4.5 and 5 years old at death, and the humerus to a juvenile between 5 and 7 years old. Remains spatial proximity at the site and their similar ages at death suggest they may represent a single individual of Homo neanderthalensis, the species that inhabited Europe and Western Asia between one hundred thousand and forty thousand years ago. However, it cannot be rejected that both bones belonged to two different juveniles.

Researchers used high resolution micro-scanning techniques to evaluate fossils’ morphological features; they compared them to other human remains from different ages. Results enabled to document some characteristics of the species which were crucial to classify them, for example robust skeleton, quick teeth development and the localization of the mental foramen.

The mental foramen is one of the two small holes located on the anterior surface of the mandible that allow passage of nerves and vessels to the brain. The new fossil and the adolescent mandible found by the research team in the cave in 2005 prove that in Neanderthals the mental foramen was located under the interdental septum, a relatively posterior placement compared with recent hominids of a similar developmental age. “Findings provide new data about growth in Neanderthals”, highlights Montserrat Sanz. In the case ofHomo sapiens those growth stage and teeth replacement would match a 5.5-6.8 year old individual.

Therefore, the Cova del Gegant is the site in which the highest number of Neanderthal human remains have been found to date. “However, the small quantity of stone tools and the low human impact found on animal remains suggests that humans only inhabited the cave during short periods of time. On the contrary, the great amount of hyena remains indicates that the cave served as a hyena’s den”, concludes Joan Daura.