The second excavation campaign led by IPHES and URV comes to the end.

Very positive results have been obtained to understand the dynamics of the Neanderthal population in this territory about 200,000 years ago.

On Saturday, April 11th the second excavation campaign at the Cova de les Llenes (Conca de Dalt, Lérida) comes to the end. A research team led by the IPHES (Institut de Paleoecologia Humana i Evolució Social) and URV (Universitat Rovira i Virgili in Tarragona), composed by at least twenty researchers, has been excavating since the last March 30th in order to recover Neanderthals activities remains in this pre-Pyrenean cave.

The results of this campaign have been very positives and allows to understand the Neanderthal dynamics population in this territory of middle and high mountain in the pre-Pyrenees during the Middle Pleistocene, 200,000 years ago. 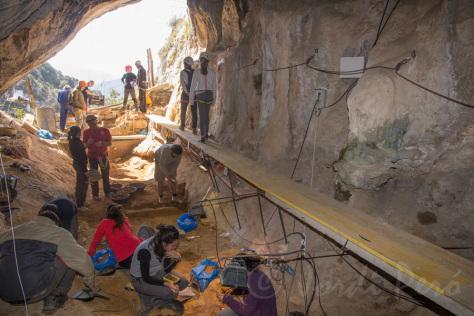 The excavations have confirmed the continuous Neanderthals occupations, which were probably related to hunting activities around the caves, animals as the tar (Hemitragus bonali), a wild sheep species extinct in Western Europe around 100,000 years ago, were probably consumed. Along with these remains other ungulates remains have been recovered such as deer, aurochs, rhinos and megaloceros (a kind of giant deer now extinct).

These camps, basically at the entrance of the cave, are commonly recognized by the lithic tools abundance made of local stone from the Flamisell river bank. Its technical characteristics fits with the typical Neanderthal industry called Levallois and discoid.

However, the natural dynamics of the cave seems to be related to carnivores dens, mainly hyenas and leopards, although they have found remains of wolves, foxes and badgers. Instead, the main protagonist is the cave bear, who regularly occupy the cave to hibernate, as its evidenced by the large remains number recovered at the bottom of the cave, the associated scratches on the walls and the ossuaries (hibernation nests).

These works in the Cova of Llenes allows to contextualize other sites located in the same area, which nature doesn’t permit the conservation of paleobiological elements, as fauna or pollen records.

The work is planned to continue not only in this cave but in others of the Erinyà gorge to conduct a territorial project to support Neanderthal behavior studies in a specific area and the relationships of these hominins with other faunal entities, for example, large carnivores.

In this sense, the Cova of Llenes is linked to a research project funded by the Generalitat de Catalunya entitled “Sharing space: the relationship between hominids and carnivores in the northern peninsula”.