A Roman period tomb containing vivid murals was found in January 2012 during excavation work on the new highway between Corinth-Patras in Greece, according to a report in Το ΒHMA newspaper.

“The intention is to transfer the entire monumental tomb to the archaeological site of Ancient Corinth in order to preserve it and allow it to be viewed by the public once conserved,” said the Central Archaeological Council director of  Conservation of Ancient and Modern Monuments, Nikos Minos. 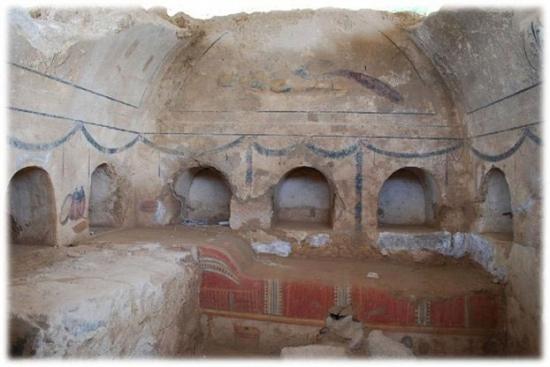 The underground chamber tomb has been dated stylistically to the 3rd century CE and measures 2.40 x 2.30 metres internally. The roof, which has been partially damaged is barrel vaulted.

There are two decorated sarcophagi, one of which is not well preserved, but the other contains a picture of a beautiful young woman lying on a bed. Within the sarcophagus were two urns, one of which contained a female burial.

With large bright eyes, auburn hair carefully coiffured into the most fashionable of hairstyles and large red lips this is a lifelike portrait. She is wearing gold earrings and her body is covered with a red blanket decorated with yellow, blue and white stripes. It is designed to look as if she is merely resting.

Close up of the painted stone bed – Note the portrait to the left. Image: Central Archaeological Council

The style of the work is exceptional and is reminiscent of the Fayum mummy portraits that date to approximately the 1st century BCE – the 3rd century CE.

The decoration continues on the walls with several motifs along the bottom depicting swags of garlands and above the niches (to hold other family members when they died) there are painted bows along with the image of a peacock  which dominates one side.

In July 2011, the same road project also uncovered elements of the old city walls of Corinth which is reported on Corinthian Matters website in their post;  Excavations unearth Corinth city walls (and other buildings).