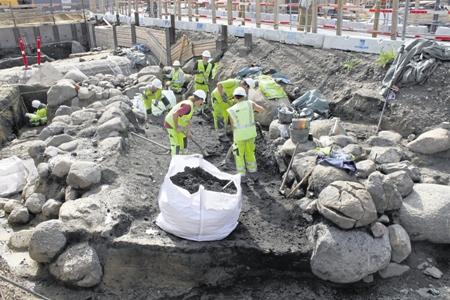 The find comes as archaeologists are busy excavating many areas around the city in advance of construction of a new Metro line. Here, archaeologists dig at the site of the original Vesterport gate (Photo: Musem of Copenhagen)

Two 300-year-old latrines unearthed from beneath Kultorvet Square are offering up answers about how everyday Copenhageners traded, ate and suffered in the 18th-century. And those answers are accompanied by some still powerful odours.

El-Sharnouby’s team made the stinky but stunning find which includes two outhouses filled with nearly 300-year-old faeces. The privies and their contents are remarkably well-preserved, thanks to the low oxygen content in the city’s soil.

“That smell is such good news for us archaeologists, because that’s how we know that the contents are well-preserved and have not been eaten up by bacteria,” El-Sharnouby added.

With all the digging going on around Copenhagen these days as part of the Metro Cityring subway project ancient faecal finds have become relatively common, but the thing that makes the Kultorvet faeces so special is that there is simply so much of it.

“There is an insane quantity – it’s going to take me months to look through it all and analyse all the contents thoroughly. But I can already see that they ate seasonal things, raspberries or blackberries, and apples. Somebody ate an apple core and it came right out the other end,” archaeobotanist Mette Marie Hald, who is in charge of analysing the plant content of the Kultorvet faeces, said.

“They ate cherries, figs and flax seeds. I have also found seeds from weeds that grow in rye fields, so they were definitely eating rye bread or rye porridge,” she added. ”We only expected to find barley porridge and local farmstead food, but we have found a whole range of plants which could possibly tell us something about trade contacts in the past.”

Less appetisingly, Hald has found evidence of intestinal worms and mites in our forefathers’ faeces.

The find may also provide new understanding about the lifestyles of the lower social classes in Copenhagen in the 1700s, because the Kultorvet toilets were apparently public facilities, accessible to all.

“It’s as close to the person, the body and everyday life as you can come,” Hald added.

The privies were used for the last time just before the great fire of 20-23 October 1728, when large parts of Copenhagen burned to the ground.