Jutting out into Lake Titicaca, the Copacabana Peninsula today boasts some of the world’s most gorgeous beaches flanked by verdant terraces and colorful housesnestled into the cliffside. It will come as no surprise that people have lived along the shores of Titicaca nearly continuously since at least 10,000 BC, and archaeologists have worked on the peninsula for decades trying to learn more about ancient Andean history.

The biggest gap in archaeologists’ information about the Copacabana Peninsula is during the Late Intermediate Period (LIP), or roughly 1000-1250 AD.  In other parts of the Andes with considerable archaeological evidence, there is a clear increase in traumatic skeletal injuries as the Wari and Tiwanaku states lost power and people scrambled to regain political control in the region. But people seem to have moved away from the Copacabana Peninsula, abandoning large structures like temples.

Bioarchaeologist Sara Juengst recently published her analysis of the only human skeletons to be found on the peninsula from the Late Intermediate Period, at a site called Ch’isi. Writing in the International Journal of Osteoarchaeology with collaborators Sergio Chávez, Dale Hutchinson, and Karen Mohr Chávez, Juengst describes the discovery of nine people buried together in flexed, seated positions in an above-ground burial chamber.  They were all adults; a mix of men and women. And every single one of them had survived massive skeletal trauma.

Of the nine people in this tomb, Juengst found that four had suffered either blunt or sharp trauma to the face or head, and seven had suffered injuries to their bodies. Most of the bodily injuries were fractures to the ribs, the face, and the forearms, suggesting these people were the victims of interpersonal violence.

Individual 6, a male in his 30s, suffered a large depression fracture to the right side of his forehead, which was caused by a blow that was so hard both the inner and outer tables of bone were affected and never quite healed properly.  Juengst suggests, based on archaeological evidence of weapons used in the Andes at other times and places, that he may have been beaten with a hand-held mace. 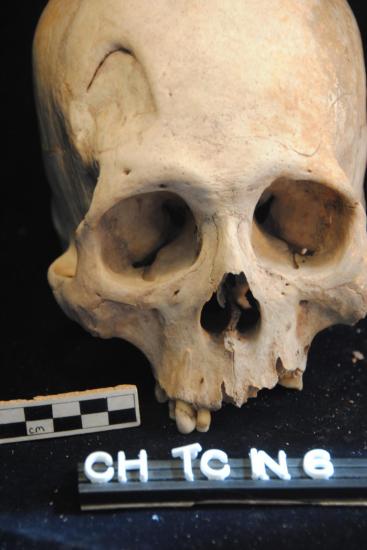 Individual 8, a middle-aged female, also reveals evidence of healed blunt force trauma to her head, her face, and her arms. The arm injuries caused shortening of the bones as they healed, and her broken nose may also have marked her out in life as the victim of violence. Her cranial fracture is most notable for a subsequent trepanation to the area.

Trepanation is an anthropological term for an ancient form of cranial surgery. Known from various areas of the world, trepanation was used for both ritual and medical reasons, and it takes a number of forms. In the prehispanic Andes, Juengst writes, “there are four well-documented types” which include “scraping, linear cutting, boring and cutting, and circular grooving.” These surgeries were probably done with obsidian or metal tools, and mummies from nearby Peru show that “covers or plaques made of metal or bone and herbal poultices may have been used in post-operative treatment.”

Three examples of trepanation from the Copacabana Peninsula are described by Juengst and Sergio Chávez in the latest issue of the International Journal of Paleopathology. Individual 8 from Ch’isi dates to the Late Intermediate Period and two much earlier examples come from the Early Horizon period.

Three skulls revealing trepanation from the Copacabana Peninsula. Individual #8, at far right, likely underwent trepanation as a result of injury to the area. Two of the three show evidence of healing. (Photo used with kind permission of S. Juengst.)

The earlier examples of trepanation both involve males, and both were made through the linear technique that involved making straight, deep cuts to remove a rectangular piece of bone. This technique tended to have a low rate of survival, Juengst notes, but the older of the two men appears to have survived it and lived for many years afterwards.

The middle-aged female from Ch’isi also seems to have survived cranial trauma.  When blunt force trauma is inflicted on the skull, internal hemorrhaging and hematoma formation generally results. Trepanation can relieve this intracranial pressure caused by abnormal blood build-up. Juengst found evidence that a trepanation was performed on this woman, using a boring-and-cutting method, which involves drilling small holes around the injury and removing the bone in the middle. This method seems to have a higher success rate than the linear cutting method applied in the earlier period to the two men, and may indicate interregional sharing of medical knowledge. As Individual 8 lived for many years following both the initial injury and the subsequent surgery, trepanation very likely saved this woman’s life.

Juengst and colleagues see all of the trauma in the nine burials from the Copacabana Peninsula as evidence of both the violent nature of life at the time and the advanced state of medical knowledge. All nine people in the Late Intermediate Period survived their nonlethal injuries, and at least one woman’s skeleton reveals evidence of what the researchers call “competent caretaking.”

Most research into trauma in the Andes has been focused on groups in other time periods and locations, bioarchaeologist Celeste Gagnon of Wagner College, who was not affiliated with this study, told me. She also asserts that ongoing work in the Titicaca Basin, by Becker and Alconini on decapitation and by Juengst and colleagues, ”offers an important counterpoint and reminds us of the time depth and widespread nature of these practices.”

It is not clear what led to the burial of these nine people at Ch’isi.  At the end of the Late Intermediate Period, the basin around Lake Titicaca was home to two warring groups – the Colla and the Lupaca – that were the Inca Empire's greatest rivals. The basin was eventually conquered and became one of the most sacred places in the Inca world, as historical records from Spanish chroniclers note that the Island of the Sun in the middle of the lake was the mythical birthplace of the Inca population. While the Inca invested in walls, roads, and temples, some of which can still be seen today on a visit to Copacabana, the history of the Lake Titicaca basin goes back much further and reveals traces of changing political regimes over time.