A sun dagger intersects the focal point of this red glyph at solar noon on the winter solstice. Earlier on winter solstice day, the dagger forms at the lower left of the panel and proceeds proceeds across and upwards until reaching the center at noon, at an ancient solar interaction site on the Campbell ranch in northern Concho County.

Among the mysteries of how ancient people created structures to mark the solstice and equinox with astonishing accuracy, this one is central: How did they determine the dates of those astronomical events? 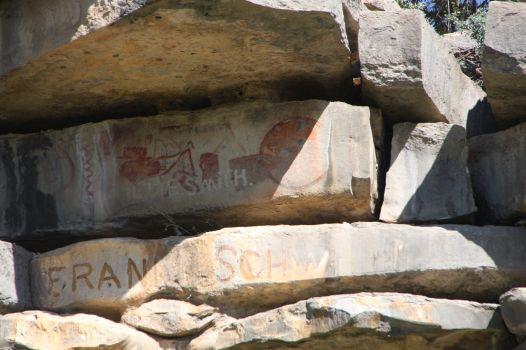 On the same day that the sun rises exactly in the horizon notch, sunlight splits the round shield pictograph at mid-morning, at an ancient solar interaction site on the Campbell ranch in northern Concho County.

Houstonian Gordon Houston, who is pursuing a doctorate on this riddle, says he believes he has figured out the answer for centuries-old glyphs known as the Pictographs of Paint Rock, Texas.

Found on a private ranch near San Angelo in northern Concho County, these approximately 1,500 pictographs on a limestone cliff include about a dozen that "had a solar interaction," Houston said. "Some were incredible."

Houston will talk about his findings at the Houston Archeological Society's next meeting, 7 p.m. Feb. 12 at M.D. Anderson Hall at the Umiversity of St. Thomas. The meeting is free and open to the public.

Perhaps the most striking of these dozen pictographs is a red circular design painted on the cliff about 20 feet above the ground. At exactly noon on the day of the winter solstice -- the shortest day of the year and the traditional beginning of the winter season -- there's a dagger of light hitting the exact center of the glyph as the sun shines through spaces between layers of broken limestone. 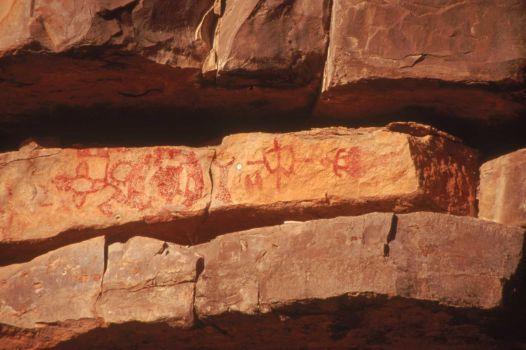 Paint Rock: Closer views of the wide variety of pictographs at the Campbell Ranch near Paint Rock

Whoever put that glyph in the right spot demonstrated a level of accuracy exceeding even more famous monuments, such as Stonehenge in England, said Houston, who holds a master's degree in astronomy and is the Schaefer Observatory director at Blinn College's Schulenburg campus.

"For them to place that glyph (so that it's highlighted) on the right day at the right time is one of the most incredible ones I've seen," he said. Houston has visited some of the world's most famous astronomical sites, including Stone Henge, Machu Picchu in Peru, Teotihuacan in Mexico, Chaco Canyohn near Santa Fe., N.M., Chankillo in the Peruvian desert and three sites on the Black Sea. 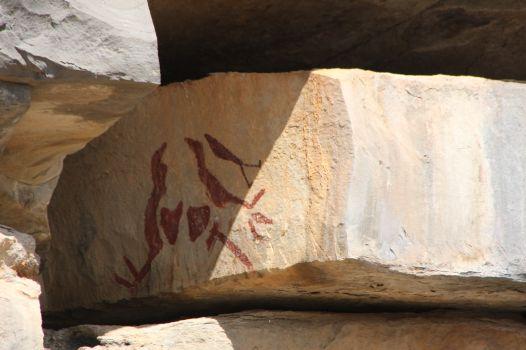 In the late afternoon of the spring and autumn equinoxes, the sun line touches, simultaneously, the bottoms of both feet of a bird-like figure at the top right of the pictograph. This alignment only occurs on the equinoxes, verifying the accuracy of the solar-interaction pictographs on the Campbell ranch in northern Concho County.

It's unclear which people painted the West Texas glyphs, since the area was a "nomadic site," used by multiple groups over time, he said. The pictographs, which constitute the largest such site in Texas, were likely painted sometime between 1300 A.D. and 1700 A.D., he said.

Kay Campbell, co-owner of the ranch with her husband, Fred, began to notice solar interactions with the pictographs in the late 1980s, according to a 2002 paper by Fred Campbell and William P. Yeates. But it wasn't until December 1996, when she was giving a winter solstice tour, that she saw the dagger of light in the center of the red glyph and realized its astronomical significance, the paper states.

Since then, thousands of astronomy buffs have trouped to the ranch to observe these amazing interactions.

Houston, 61, said he believes he is the first person to verify the process by which the monument's unknown creators determined the solstice date accurately.

He did this through repeated visits to the site, including climbing on top of the cliff to look for the early people's observation point.

"They were expert watchers of the sun along the horizon," he said. "Determining the point of observation is critical in any ancient astronomy site."

Based upon findings that he will discuss in his talk, Houston said he is convinced that the observation point was a notch where the cliff intersects the otherwise relatively featureless horizon. He has discussed his findings earlier at three conferences.

Houston is a fifth-year doctoral student in archaeoastronomy at Ilia State University in Tblisi, Georgia, on the Black Sea. He is studying with Prof. Irakli Simonia.