On an ancient road again

A group of archaeologists are retracing the historical and geo-graphical significance of the old Colombo, Kandy route. Smriti Daniel reports

It begins in Kotte and ends in Kanda Uda Rata. Along the way, it passes through Hanwella, Ruwanwella, Hettimula, Ganethenna and Balana. The ancient Colombo Kandy route is 13 miles longer than its modern counterpart but it is not the added miles that would have defeated modern motorists. The palanquins and elephants that moved along it had no need for contoured tar roads.

Even more defining was its role in defeating would-be invaders. As the preferred route for Kings and their armies, for merchants, diplomatic parties and pilgrims, the road served many purposes. Now a group of archaeologists from the National Trust, Sri Lanka have begun to trace the route and to study the many points of interest along the way. They've found tombs and temples, checkpoints and river crossings, forts and settlements.

The historical interest the route represents should qualify it for a place on UNESCO's World Heritage List says Dr. Roland Silva, former Commissioner of Archaeology and President of the National Trust, who presided over the seminar at Hanwella. 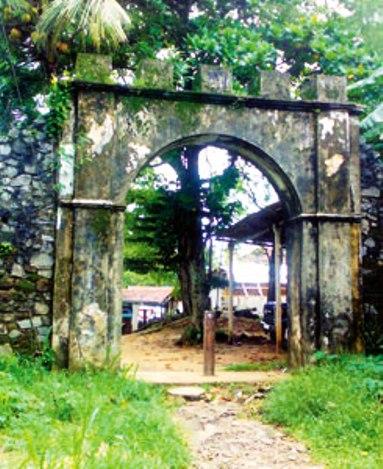 Lost in the march of time: Entrance to the fort at Ruwanwella built by the British in 1818

It's hard to imagine its custodians refusing to clear the jungle away, but on certain paths such as that from Arandora to Attapitiya the trees were encouraged to crowd in on all sides, says historian and archaeologist Srilal Perera. Having spoken at the seminar on the travel etiquette observed on the route, Mr. Perera relates the bottlenecks that were the doras or checkpoints.

It is almost as if the route itself were an obstacle course - with jungle, steep inclines, leech infestations and multiple river crossings defeating any attempt at stealth on the part of the enemy.

"It was left purposefully treacherous so that no enemy could march up to Kandy in a hurry," Mr. Perera tells me, sitting in the canteen of the Post Graduate Institute of Archaeological Research. "This gave the king time to abandon the city and go into hiding to the mountains, taking the Dhantha Dahthu with him, in order to come back consolidated and attack the enemy holding the city," he explains.

The city of Kandy itself was only a pawn in the King's strategy. When under threat, the city would be often be evacuated in a thoroughly orderly fashion and then set on fire so that it would offer no succour to the enemy. "The Portuguese fought their way up to Kandy but failed to hold it," says Mr. Perera. But the route was also used for more mundane things - ambassadors traipsed up, though some never came down, says Elmo Alles, Chairman of the NT Sub Committee for Ancient Cultural Routes.

"The king would send his own bodyguards to escort the guest, who was expected to leave his own defence system behind," says Mr. Alles, "Of course if he displeased the king, his head was chopped off, and the man's bodyguards had a long wait." Merchants would undertake less perilous journeys to transport supplies like salt, dry fish and horses to Kandy and return to the ports laden down with riches in cinnamon, pepper, areca-nut, ivory and even elephants.

All this coming and going took place in a constantly shifting political landscape - and at the heart of it was the Rajasingha dynasty. The route begins in Kotte, where the King of Kotte accepted homage from the petty lords around him, including the King of Kandy. 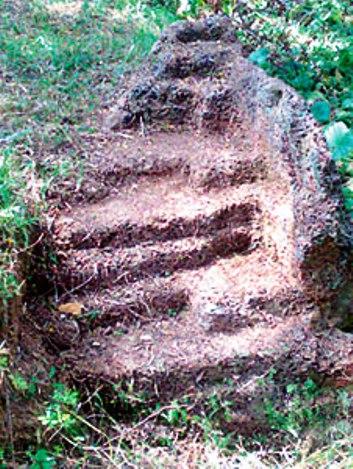 The Portuguese, at first interested only in trade, hugged the coastline. "After the murder of King Vijayabahu by his sons, the kingdom disintegrated in 1534 . King Buwanekabahu of Kotte was helped by the Portuguese army while an army of Moors sent by Samorin of Calicut helped King Mayadunne of Sithawaka," explains Mr. Perera.

Though the Moor army was defeated and their generals put to death, the common soldiers were settled on the land around Sithawaka and given Sri Lankan women as wives, he says. This he believes is of particular interest in the light of the widely held assumption that the Moors came in as invaders.

"Even the descendents of those Muslim people are ignorant of what happened in the beginning," says Mr. Perera. After Mayadunne came his son Rajasingha 1st , who lead the Sithawaka kingdom in a decisive victory against the Portuguese at the Mulleriyawa battle field in 1561. (It is still remembered in local folk stories as the time when the marshlands flowed red with the blood of the foreigners.)

Years of bloody politics followed. The ascent of Konappu Bandara as KingVimala Dharma Suriya 1st was consolidated when he snatched the lawful sovereign of Kandy, princess Dona Catharina out from under the very noses of the Portuguese. Their son would take over the kingdom as Rajasingha 2nd in 1634. He would be followed by Vimal Dharma Suriya 2nd in 1687 and Narendrasingha in 1707.

With the succession in question after Narendrasingha's death in 1739, the 1st Nayakkar king from South India - Vijaya Rajasingha - took the throne. He would be succeeded by Kirti Sri Rajasingha, Raja Adhi Rajasingha and finally in 1798 Sri Wickrema Rajasingha who would rule the Kandyan kingdom till 1815, when the English assisted by Sabaragamuwa chieftains would take over.

In local oral tradition, stories from this period are still told, says Mr. Alles. He speaks of spies leading the Portuguese on a wild goose chase as the King flees Kotte and of Veddahs setting upon the Portuguese, igniting gunpowder with flame tipped arrows.

The rivers proved a potent defence - retreating armies would strew the beds with giant elephant thorns, says Mr. Perera, adding that archaeological evidence of under-water booby traps, where iron chains were used to destroy boats on the Kelani river are still visible.

The fortress at Balana too offers up its own violent reminders - boulders piled high by elephants would be sent cascading down the incline, crushing enemies and blocking the road up. There are even hints of cooperation between the sub-Kings of Jaffna and king of Kandy - Mr. Perera suspects that the former may have imported gunpowder from India and provided his compatriot with it.

All this jostling for supremacy would extend into the cultural sphere as well. Speaking at the seminar, Dr. Sujatha Arundathi Meegama, a professor in the Department of History of Art at the University of Berkley, California, focused on the Bhairava Kovil and Pattini Devales from the Kingdom of Sithawaka.

These same ruins, she says were reborn and reused, becoming Pattini devales in later times. Other speakers at the seminar included Fredric Mendis, Cdr Somasiri Devendra and Dr Vidhanapathirana who spoke on subjects that ranged from military fortifications to river transport and famous personalities who trod the route.

"We have only tackled the first phase," said Mr. Perera, explaining that their intention was to break the route down into three phases, the last two being Ruwanwella and then Balana. Their intention is to examine the "neglected history" that is represented herein and to eventually make their research accessible to the public.

Following the route which covers such a significant geographical and historical landscape served to open up the discussion and encompass many fields of research. "Diverse topics can come in and make it interesting," says Mr. Perera, anticipating two years filled with exciting new discoveries and mind stimulating research.