The stone visible on the altar is the “Leac na Naomh” which the locals used to swear upon in order to cause storms to prove that they spoke the truth.

A medieval pilgrimage “round”, or circuit, has been identified on the Mayo island of Caher, which archaeologists believe shines fresh light on religious practices in the west of Ireland up to 1,000 years ago.

Caher, a rocky outcrop lying between the southern tip of Clew Bay and Inishturk, marks the sea end of Bóthair na Naomh, the so-called saint’s road, up to the summit of Croagh Patrick and down towards the Atlantic. 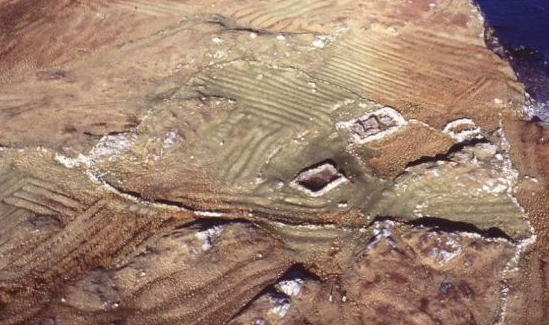 An aerial photograph of the main ruins on Caher Island next to Portatemple. Photograph: Michael O'Sullivan.

A maritime pilgrimage comprising a circuit of the island takes place annually a fortnight after Reek Sunday, but recent fieldwork has identified an outer arc of altars or “leachts”, making up a second and larger pilgrimage circuit on the south and west sides of the island.

Some of these are now only faintly visible and their existence appeared to have been lost in local folk memory, after the island was abandoned in 1838, according to archaeologist Michael Gibbons.

Material collected in the 1940s by Brian McLoughlin of Cleggan, Connemara, which is in the archives of the Irish Folklore Commission, describes the use of at least some of these pilgrimage stations as a living memory at that time, he says, and he matched this up with his own field work and aerial photography.

The circuit may be the first of its type to have been discovered in recent years. Portions of it would have been in use “almost into living memory”, Mr Gibbons suggests, and the entire round “represents a now rare example of a form of religious devotion stretching back at least a millennium on Ireland’s Atlantic coast”.

The island, also known as Oileáin na Cathrach, Cathair na Naomh and Cathair Pádraig, gets is name from a stone rampart, most of which has vanished, enclosing monastic remains above one of its two natural harbours at Portatemple.

Mr Gibbons says Caher’s ecclesiastical complex developed over a number of phases, and includes a late medieval chapel and a series of stone crosses, some of which are set up in small stone altars as pilgrimage stations. A holy well also survives to the north of the island.

A wall chamber is similar to one on Inishmurray off Sligo, and may have been used by visitors who confined themselves for several days to experience visions, or by solitary religious people known as “anchorites” to contemplate. Significantly, he notes that a similar “outer-arc” of “leachts” exists on Inishmurray, and may have been part of a “planned pilgrimage landscape”.

Mr Gibbons, who has long been a critic of the method of conservation and rebuilding used by the State on Skellig Michael, says the late medieval landscape and built heritage of Caher is “now among the most valuable in Ireland as it has remained untouched by the conservers”.

Caher has not been the subject of a modern survey programme and “a good deal of its archaeological heritage remains unmapped”, he notes.

He has also recently discovered a number of prehistoric sites on Inishturk north and a series of sites in the intertidal zone of inner Clew Bay, including a large, unmapped seaweed farm on the shore beneath Croagh Patrick at Murrisk.

Similar seaweed farms survive in Achill Sound, Co Mayo, and at Aughinish island close to the Burren on the Clare-Galway coastline.