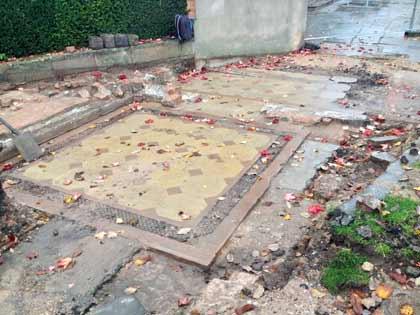 The ancient floors at Clumber Park, including part of a rendered building - the Duke of Newcastle's study and the only surviving remain of Clumber House above ground © Rachael Hall

The remarkably well-preserved surviving floors of Clumber House, the mansion which was the original 18th century seat of Lord Lincoln before being largely destroyed by fire, have been discovered by archaeologists during the final sequences of planned improvement works at Clumber Park in Nottinghamshire.

A system of cellars, used to store beer and wine in a kitchens and service area after the decadent house was built in 1768, surfaced during sewerage and draining improvement work at the National Trust site, where the former country house of the Dukes of Newcastle was demolished in 1938.

The floor is made of cut stone. Around the interior perimeter of the room is a cast iron grille which covers a heating pipe - underfloor heating© Rachael Hall

“The system is being updated to meet modern standards and accommodate the increased number of visitors to the site from when the original system was installed,” says Rachael Hall, the trust’s archaeologist for the Midlands.

“The project has been ongoing for almost four months. Hundreds of metres of service trench have been excavated to enable the installation of the new system. 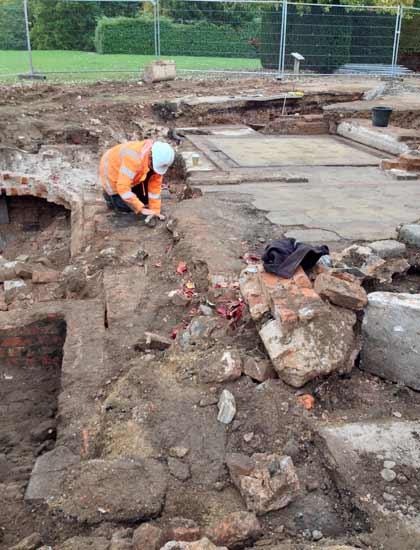 The kitchen and service area of the house© Rachael Hall

“Throughout the project we have had an archaeologist on site, supervising, monitoring and recording all the trench excavation work.

“The work had been fairly routine until the last fortnight and last 20 metres of trench excavation.

"The floors are in a fabulous condition and really do look as though they were only laid yesterday.

"They are in an incredibly good condition and state of preservation. Some of the wall foundations are also showing."

Excavators had thought the floors and foundations had been completely destroyed during its flattening, with the house abandoned following a second, much less damaging fire two years before the start of World War I.

“The decision was made to demolish the house and a contract for demolition was awarded to Henry Boot Construction,” says Hall.

“Anything of value from within the house and in the gardens was auctioned.

“It was completely levelled, with the exception of the Duke’s Study which is the only surviving remnant of Clumber House and is now used as a dining area within the Clumber restaurant.

"The stables and estate yard buildings all still survive."

Hall has worked with engineer Chris Weedon and the site team from Daltons to ensure the discoveries are preserved.

“We have redesigned the last - and connecting - section of the sewerage scheme to ensure that the archaeology is protected,” she explains.

“The archaeology will be covered with a protective layer of textile and sand, which will enable us to come back to the site to undertake further investigations and research.

“Perhaps one day in the future we may be able to look at a means of engineering a glass floor over the remains of the earlier mansion.”