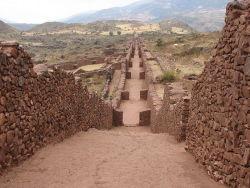 "The weather made me do it," as the saying might have gone for many, long-deceased and unnamed ancient Peruvians. Like some other populations throughout history, they were refugees of climate change who then flourished in their newly found home.

This is the story told by a recent genetic study that suggests that the evidence indicates periods of migration in pre-Columbian Andean societies in Peru, spurred on by local climate changes. It supports the archaeologists, who for years have been saying that the excavated evidence hints of such shifts by the Nasca, Wari and Tiwanaku peoples.

To get to this conclusion, anthropologist Lars Fehren-Schmitz and colleagues collected samples of mitochondrial DNA from 207 individuals in Peru’s Rio Grande de Nasca region and determined that the mitochondrial DNA likely represented Andean populations living between approximately 840 BC and 1450 AD. Using a Bayesian modeling approach, the authors found that the genetic results suggest a migration from the coastal valleys of Southern Peru to the Andean highlands during a period of increasing climate variability around 640 AD. They also found a possible backward migration from the highlands to the coast during a period of drought in the highlands and favorable conditions at the coast around 1200 AD. The study results suggest that climate-driven migrations may have led to a genetic homogenization in Southern Peru over time.

"The supported migration events coincide with observed climatic alterations, which must have led to a genetic homogenization in the RGND [Rio Grande de Nasca drainage area in southern coastal Peru] over time," report Fehren-Schmitz and colleagues in the published study. "Most studies analyzing the impact of climate on the mobility and demography of ancient populations have concentrated on foraging societies. Here we reveal climatic impacts on socially complex, agricultural societies. Despite a range of anticipatory agricultural adaptations observed in the archaeological record, the instability of the coastal and highland ecosystems in southern Peru exceeded critical points in the past in which migration became inevitable to sustain the population."*

The detailed study report is published in the Proceedings of the National Academy of Sciences (PNAS).

Source: Adapted and edited from a University of California, Santa Cruz press release.