Cis-Baikal (Russie): ancient case of human cancer in man who died 4,500 years ago 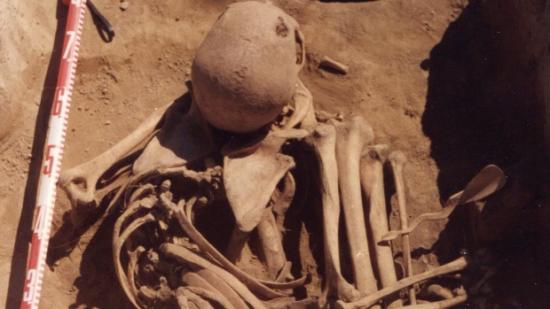 Bones of a Siberian man who lived 4,500 years ago show he died of cancer. A study by a group of researchers that includes a Saskatchewan scientist has found what may be the oldest case of human cancer in the world. (Angela Lieverse/University of Saskatchewan/The Canadian Press)

A group of researchers, including a Saskatchewan scientist, have found what may be the oldest case of human cancer in the world.

Bones of a man exhumed in Siberia that date back 4,500 years to the Early Bronze Age show he had lung or prostate cancer, which eventually spread through his body from his hip to his head. He died between 35 and 45 years old.

"This is one of — if not the oldest — absolute cases of cancer that we can be really, really confident saying that it's cancer," said Angela Lieverse, a bioarchaeologist at the University of Saskatchewan in Saskatoon.

She said there have been similar cancer discoveries in remains estimated to be 5,000 to 6,000 years old. But those involved unconfirmed cancers or tumours that were later found to be benign.

The latest study, co-authored by Daniel Temple from George Mason University in Virginia and Vladimir Bazaliiskii with Irkutsk State University in Russia, was published Wednesday in the scientific journal PLOS ONE.

Lieverse said the cancer she and her partners found refutes a widely held belief that the disease is a modern phenomenon.

"We've had this perception that it was almost non-existent in antiquity, because people didn't live the same kind of lifestyle that we live now. They lived in these pure, toxin-free environments and they were very active and ate natural foods," she said.

"But it was more common than we like to think it was."

Smoke inhalation may have caused cancer

Lieverse speculates that as well as non-environmental factors, natural carcinogens played a role in ancient cancers. The man in the study was a hunter-gatherer, who would have built wood fires to keep warm in the cool climate. He would have often inhaled smoke, which could have given him lung cancer, she suggested.

The cancer then ate holes throughout the man's bones, which were meticulously preserved and therefore easier to diagnose than typical remains.

Lieverse said as soon as she saw the skeleton in 2012, she recognized the marks left by cancer.

She had travelled to Russia as part of a project based at the University of Alberta that studied age-old hunter-gatherers in northeast Asia. But when she saw the bones of the man, her research began to focus on him.

She stayed for months documenting the remains and taking photographs.

Lieverse said the man had been buried in a small cemetery in the Cis-Baikal region. He was found in a fetal position in a circular pit with an intricately carved bone spoon, unlike most men of the time who were buried lying on their backs with their fishing or hunting gear.

He must have lived a distinct life in his community, she said, but he also would have experienced a most agonizing death. Near the end, he would have been nauseous, fatigued, unable to breathe and in constant pain.

"It's a tragic story. It breaks your heart to think of what he went through."

Paleopathological Description and Diagnosis of Metastatic Carcinoma in an Early Bronze Age (4588+34 Cal. BP) Forager from the Cis-Baikal Region of Eastern Siberia

Extensive osteolytic and osteoblastic lesions were observed on the skeletal remains of an adult male excavated from an Early Bronze Age cemetery dated to 4556+32 years BP, located in the Cis-Baikal region of Siberia (Russian Federation). Lytic lesions ranged in size from several mm to over 60 mm in diameter and had irregular, moth-eaten borders. Many of these lesions destroyed trabecular bone, though a hollowed shell of cortical bone often remained observable. Radiographic analysis revealed numerous lytic lesions within trabecular bone that had not yet affected the cortex. Blastic lesions were identified as spiculated lines, bands, or nodules of mostly immature (woven) bone formed at irregular intervals. Anatomical elements with the greatest involvement included those of the axial skeleton (skull, vertebrae, sacrum, ribs, and sternum) as well as proximal appendicular elements (ossa coxae, proximal femora, clavicles, scapulae, and proximal humeri). Osteocoalescence of destructive foci was observed on the ilium and frontal bone, with the largest lesion found on the right ilium. Differential diagnoses include metastatic carcinoma, mycotic infections, tuberculosis, Langerhan's cell histiocytosis, and multiple myeloma. Based on lesion appearance and distribution, age and sex of the individual, as well as pathogen endemism, the most likely diagnostic option for this set of lesions is metastatic carcinoma. The age and sex of this individual and appearance of the lesions may reflect carcinoma of the lung or, possibly, prostate. This represents one of the earliest cases of metastatic carcinoma worldwide and the oldest case documented thus far from Northeast Asia.