This is the first picture of how a stylish 'ancient Egyptian' necklace was discovered in the heart of Siberia. 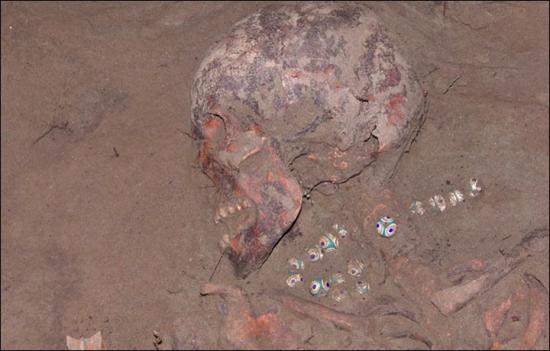 'I have worked with Altai antiquities for more than 30 years, and this necklace is probably the most beautiful find I've ever seen'. Picture: Dr.Borodovsky

Made of brightly coloured laminated glass, the priceless jewellery was found gracing the neck of a 25 year old woman in a remote burial mound in the Altai Mountains.

Scientists say she died between 2,300 and 2,400 years ago and was a kinswoman of the famous tattooed 'Princess Ukok' (see more about her here), whose astonishing body artwork preserved in the permafrost has led to worldwide interest.

In fact, while it has been nicknamed 'Cleopatra's Necklace', the highly-coloured necklace pre-dates the exotic last Pharaoh of Ancient Egypt and originates around the time that Alexander the Great dominated the world from the Ionian Sea to the Himalayas.

The 17-bead necklace is fully intact and completely unique in the former Soviet Union.

Archeologists say it throws startling new light on the level of civilisation in Siberia in the Scythian epoch.

'What we have found is of much more than local importance' - said Professor Andrey Borodovsky, 53, of the Institute of Archeology and Ethnography of the Siberian Branch of the Russian Academy of Sciences.

'We might want to ask for our foreign colleagues's expertise on the chemical composition of the glass, the necklace's origin and the exact date it was made'. 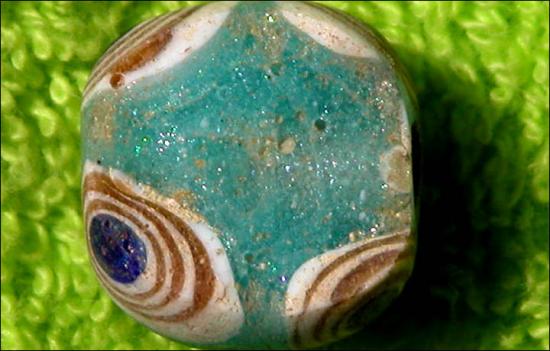 'The beads were put on a string made from tendon. Each bead is 2 to 2.5 cm in diameter, quite large. It was on her neck when she was buried, you can see it clearly on the picture which we took immediately after we cleared the dust off the necklace'. Picture: Dr. Borodovsky

Originally dug up in 2004, the necklace has never gone on public display - though this is planned for the future - because Andrey Borodovsky's team continues to study their finds in the Chultukov Log burial mounds in the Altai Mountains.

'The necklace has a striking variety of colours, beautiful shades of deep and light yellow and blue,' said the Siberian archeologist.

'I have worked with Altai antiquities for more than 30 years, and this necklace is probably the most beautiful find I've ever seen.'

It is made by the 'Millefiori' technique which involves the production of glass canes or rods with multicoloured patterns which are viewable only from the cut ends. The rod is heated in a furnace, pulled until thin, yet maintaining the design in the cross section of the glass. When cool, it is cut into beads.

'The beads were put on a string made from tendon. Each bead is 2 to 2.5 cm in diameter, quite large. It was on her neck when she was buried, you can see it clearly on the picture which we took immediately after we cleared the dust off the necklace.'

The actual find was made by Professor Borodovsky's wife, Yelena, 50, also an archeologist. 'It was my plan of excavation - but she found them', he said.

'There was seemingly no clasp. My wife always works very meticulously and there was no trace of it, so our assumption is that it was tied up.

'There was nothing in between the beads, no knots or anything like this. The beads moved freely along the string.'

'We were working on a spot which was later taken over by a petrol station. It was an emergency excavation, we were hurrying with it - and just about made it. Now a petrol filling station has been built on top of it'.

The professor is confident the age of the beads is around 2,300 to 2,400 years old because other artefacts in the burial mound, such as a mirror and a knife, which are far more common to Siberia, are known to belong to this era. Yet the presence of the necklace is totally unique compared with discoveries in all previous ancient Siberian graves.

'There have been similar looking finds in Scythian mounds in Crimea, but these were just single beads -  never a complete necklace', he said.

'Our woman belongs to the Pazyryk people. She was tribeswoman of the so-called 'Princess Ukok'. The time of their burials is close, they were both buried around the 4th Century BC.'

The scientists must await expert confirmation that - as they suspect - the glass treasure is from ancient Egypt 'but it was surely made by a craftsmen from the Middle East. Nowhere else in the world had that technique at the time.'

He surmises that 'the neckless was very valuable. Even Royal Pazyryk burials did not have a necklace like this.

'If to try and understand the value at the time, it was probably several dozen horses'.

'The level of these beads is that they are certainly among the things that any world museum would want to have', Andrey Borodovsky said. 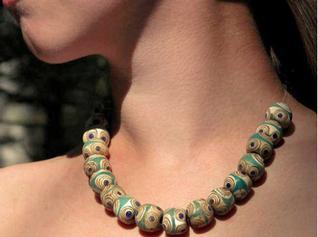 'The level of these beads is that they are certainly among the things that any world museum would want to have', Andrey Borodovsky said. Picture: Dr. Borodovsky

One of Russia's leading experts on the Bronze and Iron Ages, Borodovsky sees the beaded neckless as 'a clear indicator of the young woman's special status'.

'Even now it captures the attention immediately - back then it was without a doubt the symbol of a very special role played by that person', he added.

He has tried to build a picture of who this woman was. Her age was around 25 when she died.

'It is quite possible she was a Priestess. What points to this status is a bronze mirror which was packed into her 'burial bag'.

'The mirror had a chain of bronze pendants attached to it, also there was a set of sacrificial bones with a little butcher knife. It shows that the mirror was treated as a living creature, which points to its magical function'.

'The Chultukov Log necropolis also has a collection of elaborate hair pins, decorated with griffins, wolves and solar symbols.These pins not only carried the information about the mythology of that time, but signalled the status of the person. All hair pins were found in hairdos of married women.

'Our lady didn't have one. It's very interesting, though I can't say it definitely meant that she was a virgin'.

The find led the jewellery being dubbed 'Cleopatra's Necklace.

'The version about Cleopatra, of course, is very impressive: the image of a beautiful queen still excites the human imagination', Andrey Borodovsky said.

'But I can say one thing: they are older, and certainly belong to the time of her ancestors judging by the rest of the finds, the things belong to the end of the 4th or beginning of the 3rd centuries BC,  the start of the Hellenistic period.'

He stressed: 'I think the true owner of the necklace was also a 'blue-blooded' female. She was a woman notable for her tribe or clan.'

To the professor there is a wider historical significance.

'It shows that during the major historical changes that took place in the Black Sea, the Mediterranean and South West Asia went wider to the more remote areas of the Asian continent, which imported some interesting things.

'On one hand, it shows the scale of the historical events that occurred after the conquests of Alexander the Great, on the other it shows that Siberians back in those days, like now, could afford some unique items made by the most advanced technologies.

'In general, it is not surprising because Siberia has always been a kind of 'stream of civilization' - a transit territory, rich with resources and attractive for migration.

'We should take into account the fact that the route through Kazakhstan is close to the side tracks of the old Silk Road, and it is most likely by this route that those beads got to Altai. Obviously, this area was a very busy place.'

The remarkable necklace is currently held by the Institute of Archeology and Ethnography in Novosibirsk.

'The necklace has never been exhibited. Right now the most important thing for us is to take as much information from it as possible - and then let our museum decide where and how to exhibit it', Andrey Borodovsky said.

'It is likely the collection will be shown to the public in several years, when results of first studies will be published'.