Christmas special :The biology of the stable

Christmas special: The biology of the stable 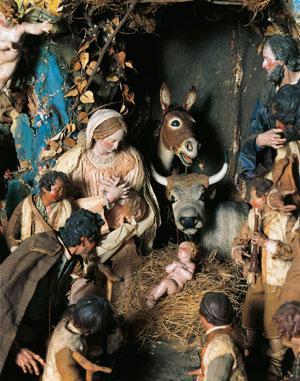 The scene is familiar to billions the world over: a ramshackle but warm stable, a newborn baby lying in a manger, and a collection of livestock standing peacefully in the background. But was it really like that? What animals would actually have there been in a Bethlehem stable 2000 years ago, and what else was lurking in the shadows and dirt?

There are no first-hand accounts of the birth of Jesus. Nevertheless, the archaeology of the region has given us a wealth of information on the history of domestic animals, and veterinary science allows us to make educated guesses about the animals likely to have witnessed such an event. Our sketch of the Nativity scene is in no way definitive, but it represents a best guess at what might have been around.

Most of the familiar farmyard animals were firmly domesticated by Jesus's time, possibly because wild animals were being over-hunted and people needed another food source. "With the exception of the turkey, all livestock animals had been domesticated a long time before the birth of Jesus," says Albano Beja-Pereira of the University of Porto in Portugal.

Sheep were probably the first, with an initial wave of domestication 11,000 years ago and a second 6000 years ago. Cattle followed shortly afterwards: they were domesticated in south-west Asia from wild animals called aurochs and then taken to Africa and Europe. Pigs were domesticated around the same time, in several different places.

Donkeys were domesticated in Africa from a single subspecies of wild African ass around 5000 years ago. They were immediately put to work lugging things around. Horses followed not long after.

As soon as animals were domesticated they changed dramatically, often becoming more brightly coloured and developing elaborate patterns like the black and white spots of some cow breeds. By Jesus's time, "their coat colours would almost certainly have been recognisable to us now, and different to their wild counterparts," says Greger Larson of Durham University, UK. Larson's studies of pig genetics have shown that colourful pigs like the familiar pink breeds appeared soon after domestication.

The practice of castrating male farm animals was also well-established 4000 years ago, producing tame and hard-working animals like oxen.

This all tells us that the popular picture of the Nativity attended by familiar livestock animals like cows, sheep and donkeys is at least archaeologically plausible, if unverifiable. But what else might have been there?

The obvious answer is insects and parasites, in huge numbers. Densely packed creatures are always tempting targets for parasites looking for a home, and domestic animals are no exception.

If we go with tradition and assume that Jesus was born in winter, any animals in the vicinity would have been crawling with lice. Cows would surely have been infested with cattle-biting lice, which chew on their hair and skin. "Lice are more common in winter, because the animals' coats are longer and thickly matted," says Richard Wall of the University of Bristol, UK. Animals shed their winter coats in spring, along with most of their lice, so a summer birth would have been less itchy.

Anyone hanging around a stable would have been irritated by the bazaar fly, the Middle East equivalent of the common housefly. As well as buzzing around infuriatingly, the fly can also spread the eye disease trachoma.

Plenty of insects bite humans, and some are willing to venture indoors. Stable flies mostly feed on the blood of livestock, particularly cattle, but they do sometimes bite humans as well. Aside from the obvious harmful effects of having one's blood sucked, some of these flies carry anthrax.

It's best to be careful when using straw as bedding, too. It is often infested with straw itch mites, one of the most aptly named organisms around. They do not feed off humans, preferring to eat other insects, but if they get on your skin they can cause dermatitis.

Annoying and potentially harmful as these species are, their unpleasantness pales in comparison with that of the sheep bot fly. Adult females squirt live maggots up the noses of sheep, where they crawl up into the sinuses and head cavity. The maggots spend the winter there, feeding on the animal's mucous membranes. In spring they crawl back down into the nostril and get sneezed out.

Another insect with a similar lifestyle is the spotted flesh fly, a common pest in the Middle East. Disdaining noses, they insert their young into open wounds and scratches, including navel wounds where umbilical cords have been detached.

They often go for the genitals, infecting millions of animals around the world. Humans are not safe, and there are rare cases of newborn babies being infected.

We won't even mention rats and mice. All in all, if you are about to give birth, try and arrange to do so somewhere other than a stable.

Cattle: classically Bos taurus, but now often Bos primigenius, the name for the aurochs they were bred from