Christening the Earliest Members of Our Genus

Around 1.8 million years ago, human evolution passed a milestone. Our ancestors before then were little more than bipedal apes. Those so-called hominids had chimpanzee-size bodies and brains, and they still had adaptations in their limbs for climbing trees. But the fossils of hominids from 1.8 to 1.5 million years ago are different. They had bigger brains, flatter faces and upright bodies better suited to walking.

Their geography changed, too. While earlier hominid fossils have only been found in Africa, the newer ones also turn up at sites stretching across Asia, from the Republic of Georgia all the way to Indonesia. These cosmopolitan hominids are so much like modern humans that paleoanthropologists consider them the earliest members of our own genus, Homo.

But they didn’t belong to our species, Homo sapiens. After all, their brains were still no more than two-thirds the size of our own, and they could only make simple hand axes and other crude stone tools. But if not Homo sapiens, then Homo what? What species did these fossils belong to?

That turns out to be a remarkably hard question to answer — in part because it is difficult to settle on what it means to be a species.

The first early Homo fossils were discovered in 1891 in Indonesia by Eugene DuBois. They came to be known as Homo erectus, named for its erect stance. In later decades, scientists found other fossils in other places, and they often decided that the fossils were so different from anything found before that they must belong to a separate species. Species names exploded: Homo erectus was joined by Homo ergaster, Homo georgicus, Homo rudolfensis and others.

But all those species were established based on only a modest numbers of fossils. And so some uncertainty is inevitable. Imagine that paleontologists from the distant future learned everything they knew about our entire species from the skeleton of a single NBA player. If they then uncovered the skeleton of a five-foot gymnast, they would be right to wonder whether they had found a separate species.

Last week, a team of scientists offered a rare glimpse of the diversity of early Homo fossils. In the journal Science, they compared five gorgeously preserved, 1.8 million-year-old skulls from a site called Dmanisi in the Republic of Georgia. In just one spot, they found a stunning diversity of forms. One skull had a large jaw and a tiny brain less than half the size of a human one. But some of their brains were up to 25 percent bigger than that specimen, while their jaws were much smaller. 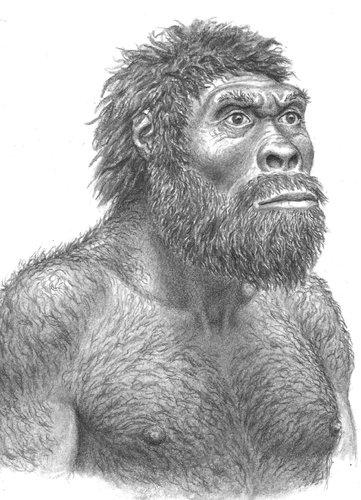 An artist’s rendition of what the original owner of Skull 5 may have looked like.J.H. Matternes

Nevertheless, the scientists found a lot of underlying similarities in the skulls’ structures. Their variation is no greater than that found in living species, like chimpanzees and humans.

Dr. Rightmire and his colleagues then compared the Dmanisi skulls to many of the early Homo skulls found across the Old World. All of those far-flung fossils fell within the same range of variation that the scientists found at Dmanisi.

Based on this analysis, the scientists declared that all those early Homo fossils belong to a single species — which they suggest should be called Homo erectus. If other researchers find evidence to support this view, said Dr. Rightmire, it would have a big impact on how we understand human evolution. “We’ll have to go back to drawing boards and rethink the origins of Homo right from the start,” he said.

If Homo erectus was indeed a single species, its range would have been tremendous compared with our closest living ape relatives. Chimpanzees, for example, live only across a narrow band of sub-Saharan Africa. What’s more, ape species tend to split apart into new ones.

Two million years ago, for example, a bend of the Congo River cut off the chimpanzees in the southern part of the species’s range. Those southern chimpanzees evolved into smaller, more slender apes that today are more peaceful than their warring cousins north of the river. Their DNA reveals little sign that they have interbred with other chimpanzees over the past two million years — despite living within a few miles of them. As a result, biologists have given them their own species name: Pan paniscus, commonly known as bonobos.

If Homo erectus was like chimpanzees, it would be remarkable for them to hang together across rivers and deserts and mountain ranges as a single species. But Todd R. Disotell, a biological anthropologist at New York University, suggests that early Homo might be more like another primate. “Baboons probably make a good analog,” said Dr. Disotell.

Baboons live across much of Africa, as well as the Middle East. From place to place, the baboons look different — so different, in fact, that scientists have split them into some half a dozen species. And if you look at their DNA, you can find evidence that these so-called species have remained distinct from each other for up to four million years.

These baboons have overlapping ranges, and where they come into contact, they regularly interbreed. They have hybrid babies that are perfectly healthy. Some genes from one group of baboons can spread into another this way. And yet the groups remain distinct, never blurring together.

Each group of baboons has adapted to one particular way of life — some surviving in a desert, for example, and others in a woodland. For the most part, the genes that help a baboon in one range put it at a disadvantage somewhere else.

The baboon expert Clifford Jolly first proposed that our ancient relatives were joined together by a baboon-like web of connections. Distinct groups of hominids lived in distinct ranges. But in some places, at some times, they came into contact with other hominids, and their biology allowed them to interbreed. “Maybe Dmanisi was the equivalent of that,” said Dr. Disotell.

While this explanation may turn out to be closer to the truth than the idea of a single species, it would leave us struggling to find the right name for our ancient relatives. Was each one a separate species, deserving of its own name? Dr. Disotell doubts we can answer that question, pointing to baboons. Despite a luxury of data, scientists continue to debate whether baboons belong to different species, or just one.

“What we need, practically, is labels for them,” said Dr. Disotell. “We will never solve the species problem for fossils if we can’t for living, breathing animals.”