Chingford (G-B): remains of a relatively unknown medieval manor house dating back to the 14th century 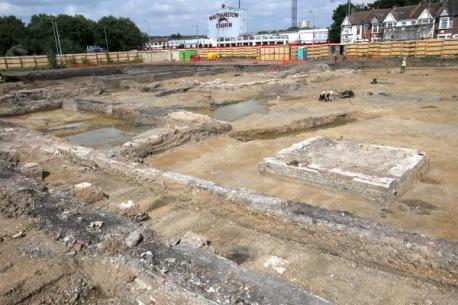 The remains of a relatively unknown medieval manor house dating back to the 14th century are being excavated beneath Walthamstow Stadium's former car park prior to development of the site.

A team of eight archaeologists from Archaeology South East are currently working on a section of the car park site, owned by Peugeot, and have discovered prehistoric ditches and pottery, animal bones and household artefacts’ dating back to the Victorian era.

The manor house, known as Salisbury Hall, was acquired by the Salisbury family in the early 14th century in 1322 and belonged to the Tyrwhitt family until the late 16th century before it fell into the hands of Henry VIII and later Queen Elizabeth I.

According Archaeologist and team supervisor Ian Hogg, the manor house burnt down in the 16th century which was 'not considered uncommon' and rebuilt during the Tudor period as a two-storey timber-framed build with a double-gable porch.

During the start of Queen Elizabeth I rein, her tutor Sir Roger Ascham took up residence in Salisbury Hall and paid her majesty £20 a year in rent.

It was then owned by the Rampton Family and passed through various ownerships where it was modified until the late 19th century.

The archaeologists are half-way through their project and have recently discovered a pre-historic field system comprised of a series of ditches.

They believe the ditches date back more than 2,000 after two pieces of pottery were unearthed.

He said: "It is staggering how little we know about the manor house and its inhabitants and going into the site we expected to find less as the site was last excavated in the 1950s and then turned into the car park.

“The pre-historic ditches were probably used how we would use hedges today – to divide up the land.

“I don’t think there was a pre-historic settlement on the land, I think they may have used it for farming but travelled from some distance away otherwise we would have found other remains.”

He added it was interesting to find signs of pre-historic life at the site because it is deemed quite rare.

Other remains found on-site include the handle of a medieval vessel, a Victorian marmalade jar, medicine bottles, beer bottles, and animal remains including a cow jaw, part of pelvis bone, and roof tiles. 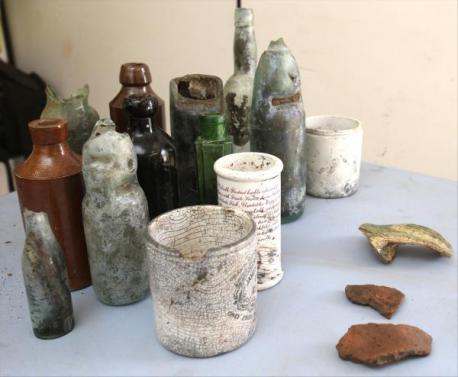 Mr Hogg suspects the array of pottery and glass was thrown onto the land to firm up the ground.

The site was last excavated in the 1950s by the Walthamstow Antiquarian Society where it is thought many of the remains may have been destroyed or damaged.

Salisbury Hall was used by the Home Guard during the Second World War but was torn down in the in the 1950s although it is not known why other than its value had depreciated greatly and was believed to have dilapidated.

As a result of the dig, Mr Hogg believes the medieval manor house was extensively larger than presented on drawings, and was built far smaller during the Tudor period.

Archaeologists will remain at the site for the next three weeks before all of the findings are analysed at the London Archaeological Archive and Research Centre, and a final report is drawn up.