Chimps in Senegal found to fashion spears for hunting 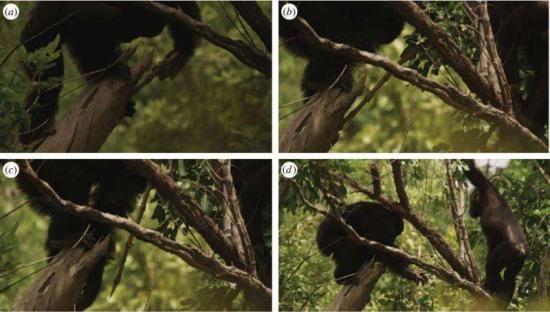 Tool-assisted hunting by chimpanzee at Fongoli, Sénégal. Adult male chimpanzee uses modified tree branch with modified end to (a–c) stab into a cavity within a hollow tree branch that housed a Galago he ultimately captures as (d) his adolescent brother looks on. Images are courtesy of BBC. Credit: (c) Royal Society Open Science, DOI: 10.1098/rsos.140507
Members of a troop of chimpanzees living at a site called Fongoli in southeastern Senegal have been observed by scientists fashioning tree branches into spears and using them to hunt and kill bushbabies. The researchers, a combined team with members from the U.S. the U.K. and Germany have published their observations and findings in Royal Society Open Science.
In their seven year study of the chimps living at the site, the researchers spotted chimpanzees breaking off tree branches, tearing off smaller branches and leaves, removing the weak tips and sometimes gnawing on the ends to sharpen them. The spears (which were on average about 75 centimeters long) were then used to stab bushbabies sleeping in their nests in tree hollows. The poking, the team reports was not lethal, instead, it caused injuries to the bushbabies which was enough to allow the chimps to bite and kill them with relative ease.

Bushbabies are small primates with big eyes and sharp teeth, and serve as a primary protein source for the chimps living in that part of Africa, where other sources are rare. The researchers began their study in 2007, observing chimp behavior up until last year. During that time period they recorded 308 spear hunting events, which they noted, was more common for females than males—they accounted for 61 percent of the total. The researchers suggest this is likely the case because it is more difficult for females to chase down prey because they almost always have offspring clinging to their bodies. To date, the chimps are the only known animal to use a tool as a weapon to hunt a "large" animal, other than humans—chimps in other troops have been seen to use twigs as tools to help collect termites, but scientists do not count that as hunting.

The researchers also found that the troop at Fongoli was a much more cooperative collective than has been found in chimp troops in other parts of Africa—dominant males, for example, allow females and smaller males to keep and eat what they kill, rather than stealing it from them. That might help explain the development of tool use, which the team speculates, likely began with females. They also suggest the same might be said for early humans, who developed weapons use in a very similar environment.

For anthropologists, meat eating by primates like chimpanzees (Pan troglodytes) warrants examination given the emphasis on hunting in human evolutionary history. As referential models, apes provide insight into the evolution of hominin hunting given their phylogenetic relatedness and challenges reconstructing extinct hominin behaviour from palaeoanthropological evidence. Among chimpanzees, adult males are usually the main hunters, capturing vertebrate prey by hand. Savannah chimpanzees (P. t. verus) at Fongoli, Sénégal are the only known nonhuman population that systematically hunts vertebrate prey with tools, making them an important source for hypotheses of early hominin behaviour based on analogy. Here, we test the hypothesis that sex and age patterns in tool-assisted hunting (n = 308 cases) at Fongoli occur and differ from chimpanzees elsewhere, and we compare tool-assisted hunting to the overall hunting pattern. Males accounted for 70% of all captures but hunted with tools less than expected based on their representation on hunting days. Females accounted for most toolassisted hunting. We propose that social tolerance at Fongoli along with the tool-assisted hunting method, permits individuals other than adult males to capture and retain control of prey, which is uncommon for chimpanzees. We assert that tool-assisted hunting could have similarly been important for early hominins.