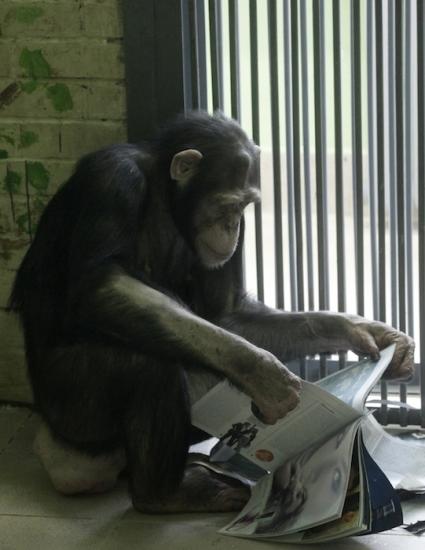 The personality traits observed in chimpanzees are identical and structured similar to humans, according to a Georgia State University study.

Researchers said that the traits are also determined by the neurobiology .

"Our work also demonstrates the promise of using chimpanzee models to investigate the neurobiology of personality processes," assistant professor Robert Latzman of Psychology, who led the research team, said in a statement. "We know that these processes are associated with a variety of emotional health outcomes. We're excited to continue investigating these links."

For the study, the researchers examined the responses of questionnaires for 174 chimpanzees at the Yerkes National Primate Center at Emory University. The questionnaires were filled out by the chimps' caretakers, who rated the apes in 43 categories (excitable, Impulsive, Playful, Timid and Dominant among others).

The researchers found that chimps belong to either one of the two personality types, dominant "Alpha' or playful or sociable "Beta." These two major categories can be broken down to smaller traits that closely resemble the five main personality traits of humans: openness, conscientiousness, extraversion, agreeableness and neuroticism. Chimps also displayed similar mix of traits - dominance, conscientiousness, extroversion, agreeableness and intellect.

The factor that closely connects humans and chimps is the presence of certain similar hormones in the brain.

The researchers found that chimpanzees' personality traits are connected with the function of a neuropeptide called vasopressin. In humans, vasopressin regulates the feelings of aggression, love and generosity.

Male chimps with a common variant in the genes that control vasopressin are more dominant and uninhibited, while females with this genetic variation were more likely to be less dominating and more inhibited, Live Science reports.

"These results are particularly significant in light of the striking parallels between the major dimensions of personality found between chimpanzees and humans," said Sam Gosling, professor of psychology at the University of Texas at Austin.

The findings, "Personality in Chimpanzees (Pan Troglodytes): Exploring the Hierarchical Structure and Associations with the Vasopressin V1A Receptor Gene," are published online in the journal PLOS ONE.