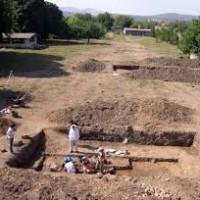 In July 1984, an ancient sarcophagus of the early archaic period was found during rescue excavations conducted by Dr. E. Korka in the area of Faneromeni near the town of Chiliomodi in Corinthia. Inside the sarcophagus, a female skeleton was preserved along with remarkable offerings and the interior of the slab was covered with a composition of two lions of monumental character.

Because of the importance of this find, surveys were conducted in the area around the discovery and the surrounding region where the ancient city of Tenea is believed to have been located. 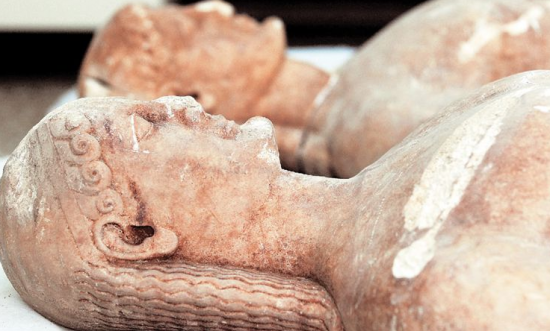 The first systematic investigation in the area started in 2013 under the direction of Dr. Elena Korka, now Director of the Ephorate of Private Archaeological Collections and Antiquity Shops.  It included the participation of Greek and foreign scholars, archaeologists, geologists, and students. An archaic cemetery of continuous use came to light. Organized burial sites with archaic period enclosures were found forming part of a rich cemetery worthy of the importance of the city of Tenea during the archaic period.

Tenea was the main town of the valley, which is situated in a strategic location controlling the pathway from Argos to ancient Corinth and Kenchreai which was very active in the 8th century BC due to the participation of Tenea in the colonization of Syracuse.  Pausanias, the second century AD traveler, stated that residents of Tenea were Trojan prisoners transferred from Tenedos under the command of Agamemnon.  The historian Strabo mentions that Tenea was the place where the Corinthian king Polybius nursed Oedipus.  Moreover, Strabo declared that before the destruction of Corinth by the Romans, Tenea became independent.

Until today, only sporadic remains of the city have been discovered in the region between Klenia and Chiliomodi such as  the Munich kouros, the above mentioned sarcophagus, and two archaic kouroi found and seized by the police in 2010 with the cooperation of Dr. E. Korka, then Head of the Ephorate of Documentation and Protection of Cultural Goods.  It is thus most likely that substantial archaeological remains of this important ancient city are expected to come to light very soon.